Pancreas Divisum as an indication of Islet transplantation 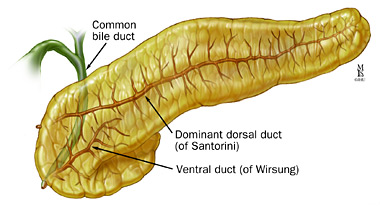 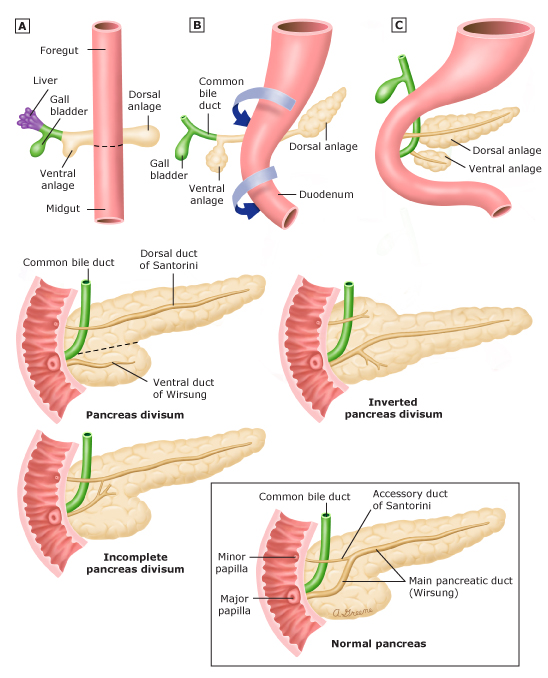 I. Title
II. Pancreas Divisum as an indication of Islet transplantation
III. Abstract
IV. Introduction and objective
i. Review cases of pancreas divisum that have been reported in allo- and auto-transplant.
ii. Normal Pancreas Embryology:
i. Pancreas gland arises during 5th week of gestation from three overgrowths of the primitive duodenum.
a. Dorsal pancreatic: the dorsal pancreas form gut is in the midline and later comes to lie in the cavity of the duodenum.
b. Two caudal ventral buds: the right ventral bud, ventral from gut, develops caudal in association with primitive bile duct to the dorsal and left bud disappear.
c. The ventral rotates at 7th week posteriorly and then left caudal to dorsal bud.
d. The duct system fuse together, the dorsal duct form the main duct of the body and tail while the ventral duct (Wirsung’s duct) becomes the main duct for pancreatic secretion coursing through the head and opening into the major papilla in the duodenum. The dorsal duct drains in the duct of Santorini through minor papilla.
ii. Pancreas Divisum is the most frequent anatomic variation in pancreas. The first description by Joseph Hyrtl (anatomist, 1810-1894).

a. Three types:
i. Type I or Classical divisum: failure of fusion between dorsal and ventral. Without fusion, the main pancreatic duct coming from the tail drains to the small papilla. 70 % of population.
ii. Type II: Dorsal duct (Santorini’s duct) is dominant and the Wirsung’s duct is absent.
iii. Type III or Incomplete Divisum: small communicating branch is present. 15% of population.
iii. Pathophysiology: The cause of pancreatitis in Pancreas divisum is because of the dominant dorsal duct drains to the minor papilla orifice which it is small and consequently excessive high intrapancreatic dorsal ductal pressure occurs during active secretion. This may result in inadequate drainage, ductal distension, and pain. The ducts are so sensitive that even low grade hypertension makes the pancreas more prone to injury from alcohol, trauma, and drugs.
iv. However, the correlation of pancreatitis with Pancreas divisum is very low [1]. Less than 20 percent of patient with pancreas divisum will develop pancreatitis and most of them are asymptomatic. Therefore, the main issue in pancreas divisum is the physiologic of the valve.
v. [2]Pancreas Divisum diagnosis: MRCP or EU

vi. Indication for Islet transplantation:
vii. Islet autotransplant eiologies:
i. Minnesota Criteria: Definitions (Must have A, B, or C)
A. Chronic pancreatitis with chronic abdominal pain lasting for > 6 months with features consistent with pancreatitis and objective evidence by having one of the following:

1. The primary indication for TP-IAT is to treat intractable pain in patients with  impaired quality of life due to CP or RAP in whom medical, endoscopic, or prior surgical therapy have failed

2. TP-IAT should not be performed in patients with active alcoholism, active illicit substance abuse, or untreated/ uncontrolled psychiatric illness that could be expected to impair the patient’s ability to adhere to a complicated medical management plan…Patients with poor support networks have a relative contraindication due to the cost and complexity of managing diabetes and pancreatic enzyme replacement therapies. Recommendation 2B

4. There are no studies that specifically evaluate contraindications to this procedure. However, TP and TP-IAT are major surgical procedures, with potential operative complications, a prolonged surgical recovery, and an intensive post-operative regimen that includes management of diabetes mellitus and lifelong enzyme therapy for pancreatic enzyme insufficiency. Recommendation D

5. The severity, frequency, and duration of pain symptoms, narcotic requirements, disability/impaired quality of life, residual islet function, rate of disease progression, and age of the patient should be considered in timing of the procedure. Recommendation D

6. Patients who meet the inclusion criteria (see above) and who are not excluded should be evaluated by a multi-disciplinary team who will review alternative interventions, assess the likelihood of success in reducing pain and preventing or minimizing diabetes, follow the patient through the procedure and provide guidance for long-term care. Recommendation D.

7. Evaluation should include confirming that pancreatitis is the primary diagnosis, determining that the pain is of pancreatic origin, monitoring the presence of diabetes, assessing beta-cell mass, and assessing the patency of the portal venous system, evaluating for liver disease, and determining immunization status. Recommendation D

ix. According to Melani D. Bellin et al. most common risk factor for patients in children undergoing a TPIAT is the occurrence of predisposing genetic mutations (54%) such as mutations in the trypsinogen gene (PRSSI) which predisposes inappropriate activation of trypsin, loss of trypsin inhibitor function (SPINKI gene mutation), and cystic fibrosis transmembrane (CFTR)gene mutations. Other factors such as pancreas divisum, and idiopathic disease, trauma [3].

at December 14, 2019
Email ThisBlogThis!Share to TwitterShare to FacebookShare to Pinterest
Labels: Research