The Gallbladder and bile ducts 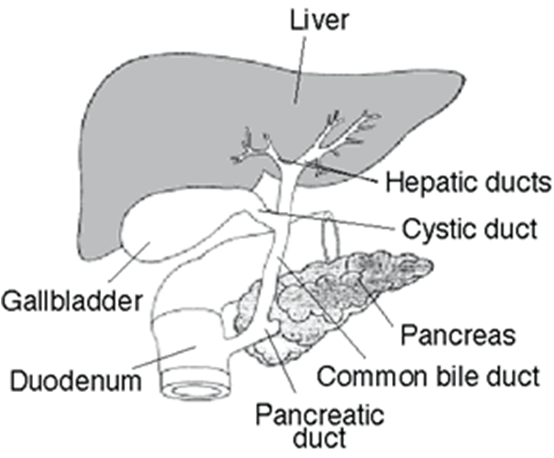 The cystic duct varies in length from 1 to 5 cm and in diameter from 1 to 3 mm; it usually joins the common hepatic duct at an acute angle.

The common bile duct is formed by the junction of the cystic and hepatic ducts. 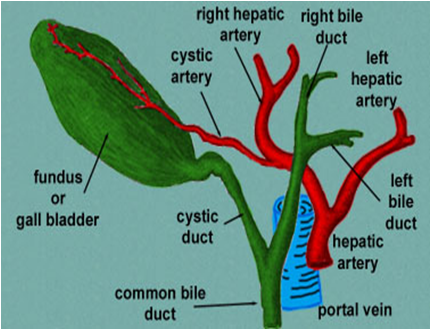 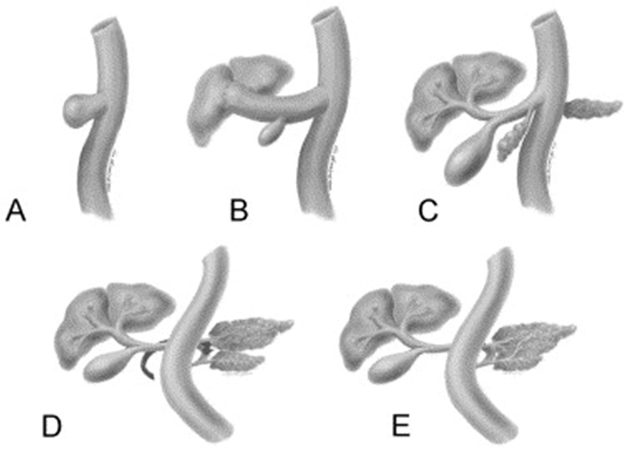 It may be due to viral infection or defective embryogenesis resulting in the inflammatory destruction of extra- and intrahepatic biliary tree.
Incidence 1 in 12000 live births
Male and female equally affected.
It may be associated with: cardiac lesions, polysplenia, situs inversus, absent vena cava and a preduodenal portal vein.

Clinical features
D/D
Treatment
In correctable cases:
Roux-en-Y hepaticojejunostomy
In noncorrectable cases:
Hepaticoportojejunostomy (Kasai’s operation)
Radical excision of all bile duct tissue up to the liver capsule is performed.
A roux-en-Y loop of jejunum is anastomosed to the exposed area of liver capsule above the bifurcation of the portal vein creating a portoenterostomy

Liver transplantation: in case of unsuccessful

It is a congenital, multiple, irregular dilatations of the intrahepatic ducts with stenotic segments in between.
Extrahepatic biliary system is normal.

Choledochal cysts are congenital dilations of the intra- and/or extrahepatic biliary system.

Type Ia and b: diffuse cystic
Type II: diverticulum of the common bile duct
Type III: diverticulum within the pancreas
Type IV: extension into the liver
Type V: cystic dilatation only of the intrahepatic ducts

MRI/MRCP:
reveals anatomy. Esp. relationship between the lower end of the bile duct and the pancreatic duct.

CT:
show the extent of intra- and extrahepatic dilatation.

Treatment
Radical excision of the cyst is the t/t of choice with reconstruction of the biliary tree using a RouX-en-Y loop of jejunum.
at March 29, 2014