Homocystinuria is caused by cystathionine synthetase deficiency. Affected individuals manifest with skeletal abnormalities resembling those of Marfan syndrome. In addition, they are also at high risk of developing thromboembolism. About 50% of affected patients respond to high doses of vitamin B6 (pyridoxine).

Homocystinuria is the most common inborn error of methionine metabolism and is caused by cystathionine synthetase deficiency. Thromboembolic episodes involving both large and small vessels, especially those of the brain, are classically associated with this condition and may occur at any age. Other clinical manifestations resemble those of Marfan syndrome. These include ectopia lentis, elongated limbs, arachnodactyly, and scoliosis. 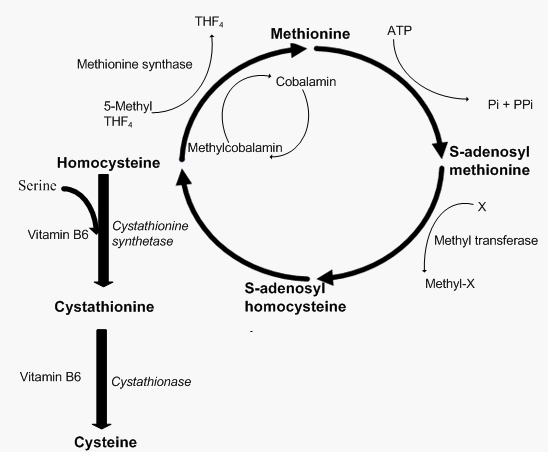 at February 11, 2014
Email ThisBlogThis!Share to TwitterShare to FacebookShare to Pinterest
Labels: Biochemistry, Pathology