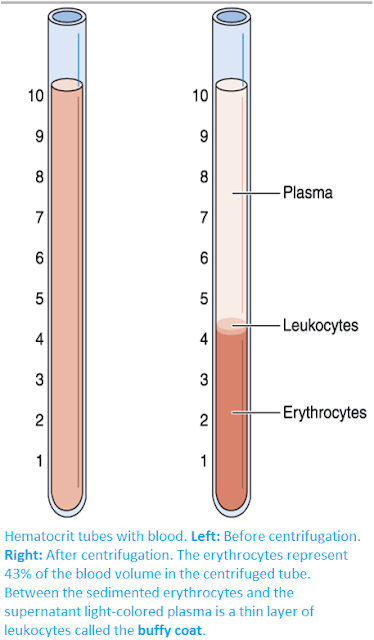 Staining of Blood Cells
Blood cells are generally studied in smears or films prepared by spreading a drop of blood in a thin layer on a microscope slide.
.
Blood smears are routinely stained with special mixtures of red (acidic) and blue (basic) dyes. These mixtures also contain azures, dyes that are useful in staining some structures of blood cells known as azurophilics (azure + Gr. philein, to love). Some of these special mixtures (eg, Giemsa, Wright's, Leishman's) are named for the investigators who introduced their own modifications into the original mixture.

Erythrocytes (red blood cells), which are anucleate, are packed with the O2-carrying protein hemoglobin. Under normal conditions, these corpuscles never leave the circulatory system.
Most mammalian erythrocytes are biconcave disks without nuclei .When suspended in an isotonic medium, human erythrocytes are 7.5       m in diameter, 2.6       m thick at the rim, and 0.8       m thick in the center. The biconcave shape provides erythrocytes with a large surface-to-volume ratio, thus facilitating gas exchange. 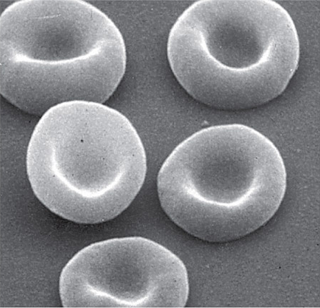 A decreased number of erythrocytes in the blood is usually associated with anemia. An increased number of erythrocytes (erythrocytosis, or polycythemia) may be a physiological adaptation. It is found, for example, in people who live at high altitudes, where O2 tension is low. Polycythemia (Gr. polys, many, + kytos, cell, + haima, blood), which is often associated with diseases of varying degrees of severity, increases blood viscosity; when severe, it can impair circulation of blood through the capillaries. Polycythemia might be better characterized as an increased hematocrit, ie, an increased volume occupied by erythrocytes. 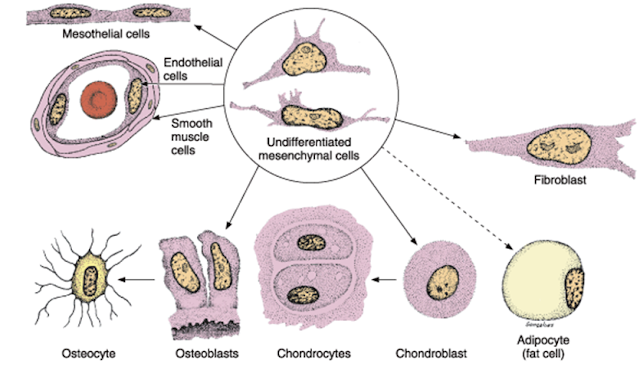 Red cell formation (erythropoiesis). The process of erythropoiesis is directed towards producing a cell devoid of organelles but packed with haemoglobin.

The first recognisable erythrocyte precursor is known as the proerythroblast, a large cell with numerous cytoplasmic organelles and no haemoglobin. Further stages of differentiation are characterised by three main features: decreasing cell size and nuclear extrusion
progressive loss of organelles; the presence of numerous ribosomes at early stages accounts for the marked cytoplasmic basophilia (blue staining) which steadily decreases as the number of ribosomes falls
progressive increase in the cytoplasmic haemoglobin content; this accounts for the increasing eosinophilia (pink staining) of the cytoplasm towards maturity. 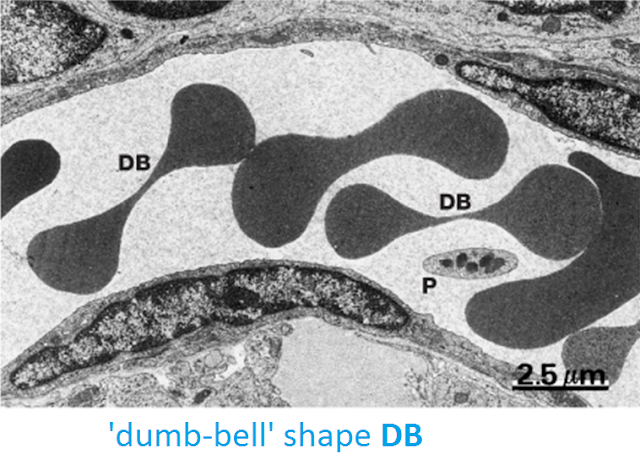 When severe erythrocyte loss occurs, such as after haemorrhage or haemolysis, the rate of erythrocyte production in the bone marrow increases and the proportion of reticulocytes in circulating blood rises (reticulocytosis). Clinically, the reticulocyte percentage is a useful indicator of erythropoiesis. In cases of anaemia, an elevated reticulocyte count indicates normal marrow function, while a decreased count may mean impaired erythropoiesis. Failure to maintain an adequate haemoglobin concentration is termed anemia. There are several common causes of anaemia, including lack of factors required to make haemoglobin, (e.g. iron, or vitamins B12 and folic acid), excessive loss or inappropriate destruction of erythrocytes, or failure of bone marrow to manufacture enough cells. Erythrocyte morphology may be altered in certain types of anaemia. Lack of iron leads to cells that are smaller than normal (microcytes) while lack of B12 and folate leads to cells that are larger than normal (macrocytes). Abnormally rounded and fragile erythrocytes (spherocytes) may be caused by mutations in genes coding for proteins in the red cell cytoskeleton 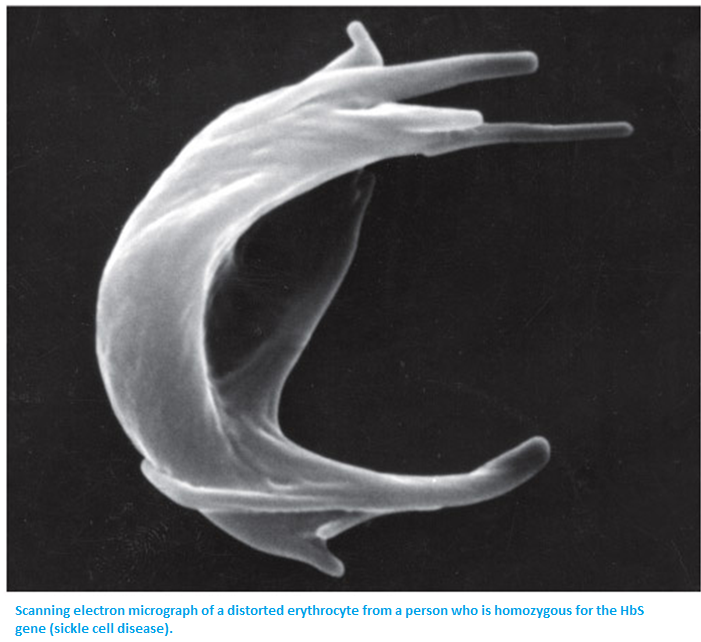 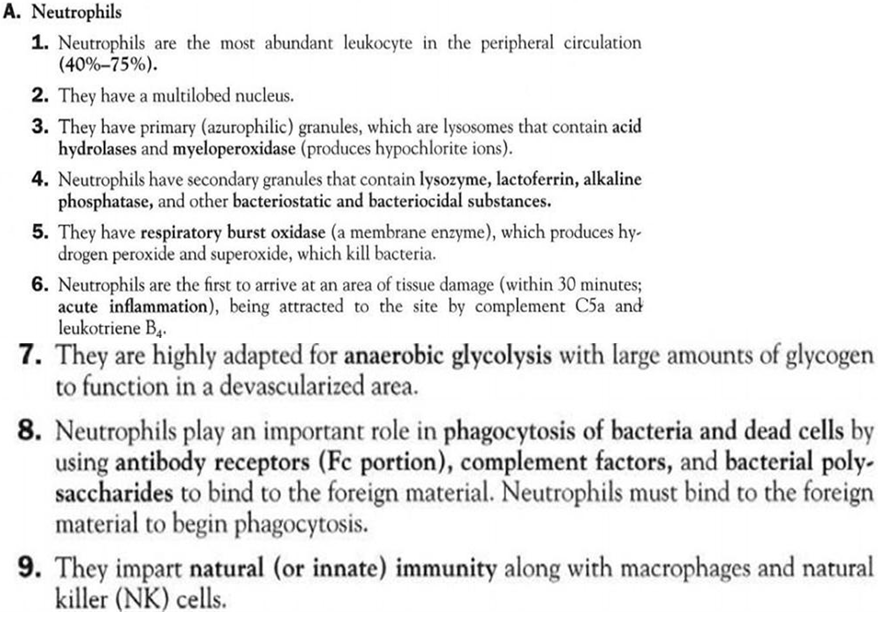 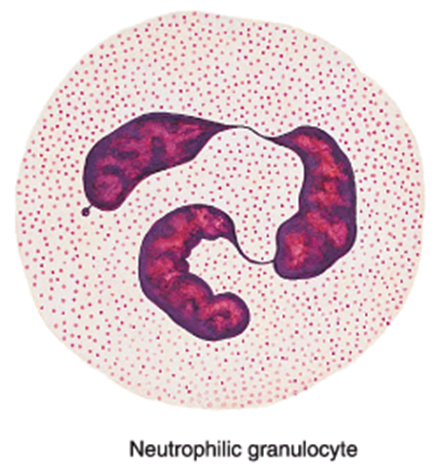 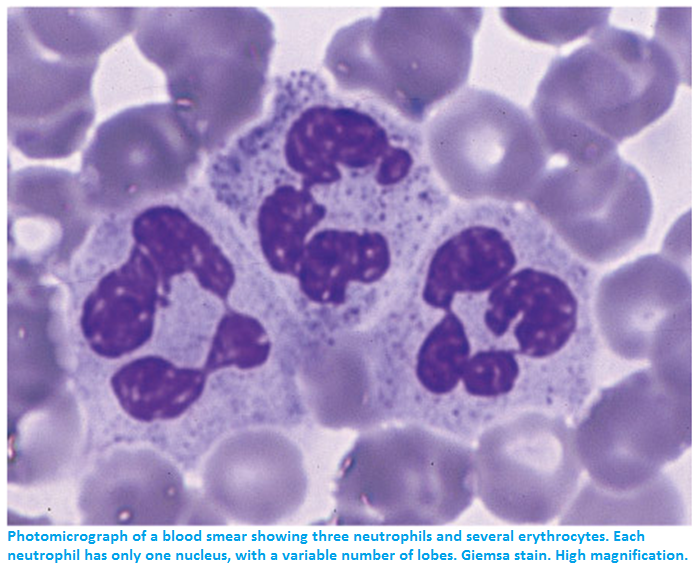 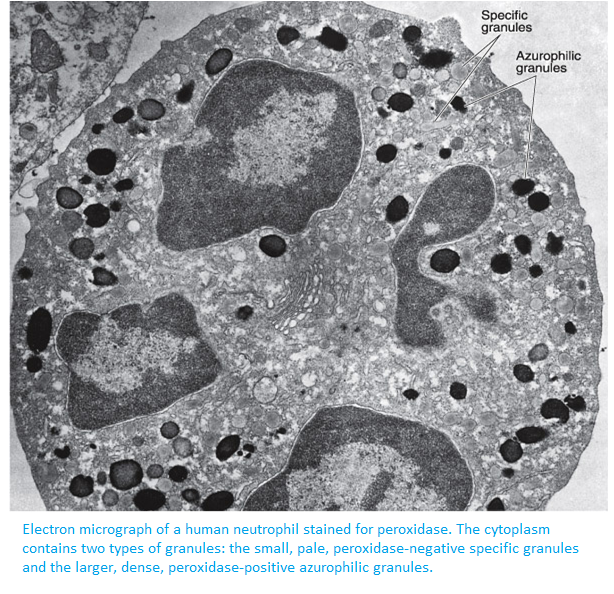 Neutrophils with more than five lobes are called hypersegmented and are typically old cells. Although the maturation of the neutrophil parallels the increase in the number of nuclear lobes under normal conditions, in some pathological conditions, young cells appear with five or more lobes. 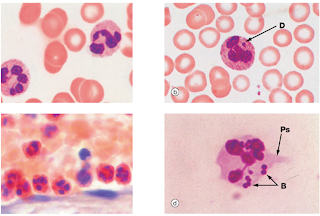 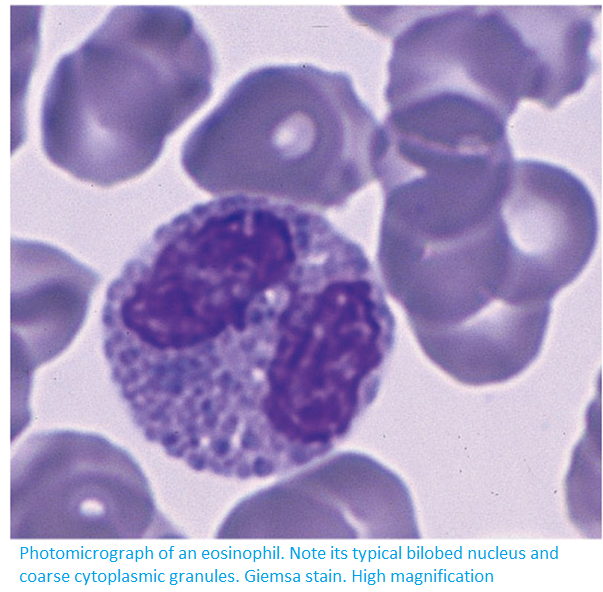 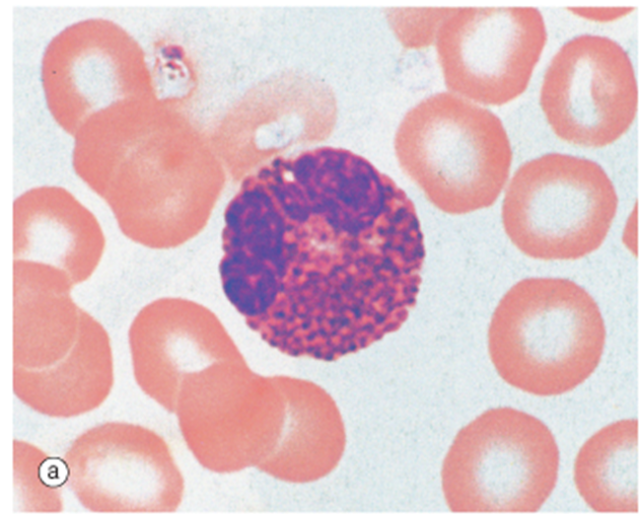 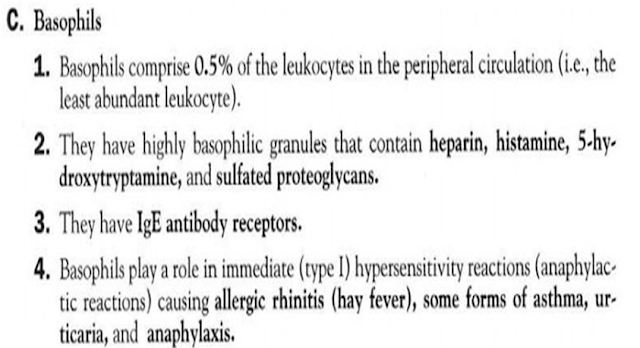 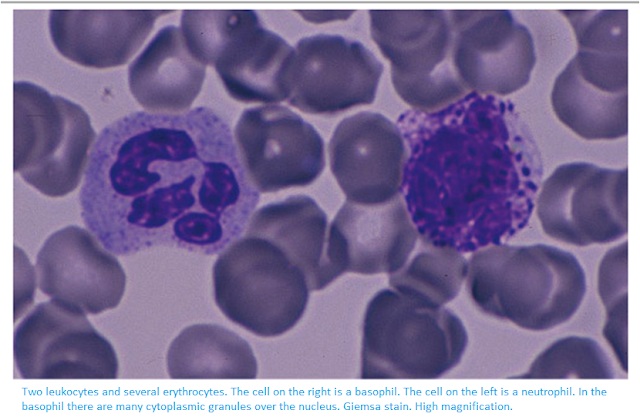 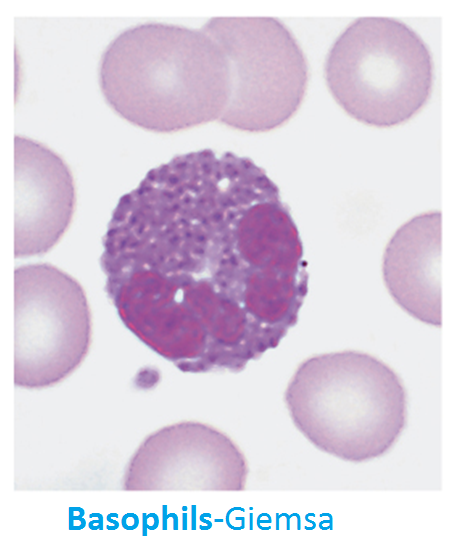 Metachromasia is a property that enables certain substances to change the color of some basic dyes (eg, toluidine blue), being stained by the changed color (purple, in this example). Basophils can liberate their granule content in response to certain antigens, as can mast cells . 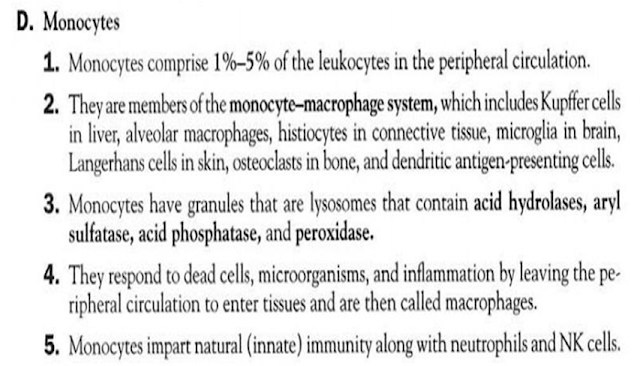 Lymphocytes constitute a family of spherical cells with similar morphological characteristics. They can be classified into several groups according to distinctive surface molecules (markers), which can be distinguished by immunocytochemical methods. They also have diverse functional roles, all related to immune reactions in defending against invading microorganisms, foreign macromolecules, and cancer cells

The cytoplasm of the small lymphocyte is scanty, and in blood smears it appears as a thin rim around the nucleus. It is slightly basophilic, assuming a light blue color in stained smears. It may contain a few azurophilic granules. The cytoplasm of the small lymphocyte has a few mitochondria and a small Golgi complex; it contains free polyribosomes 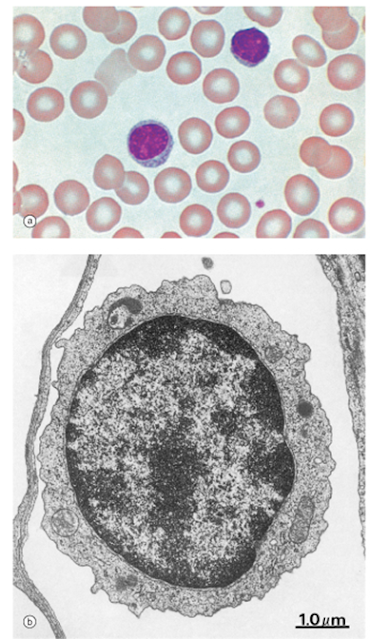 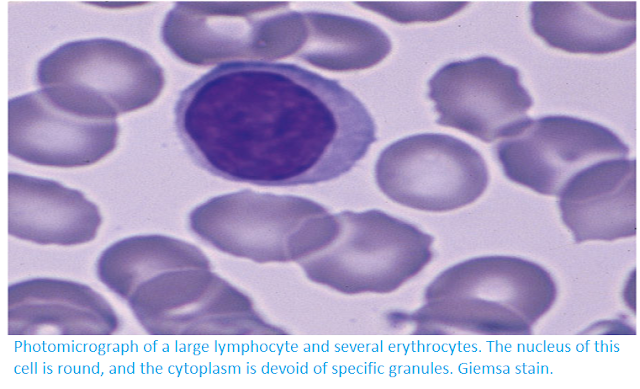 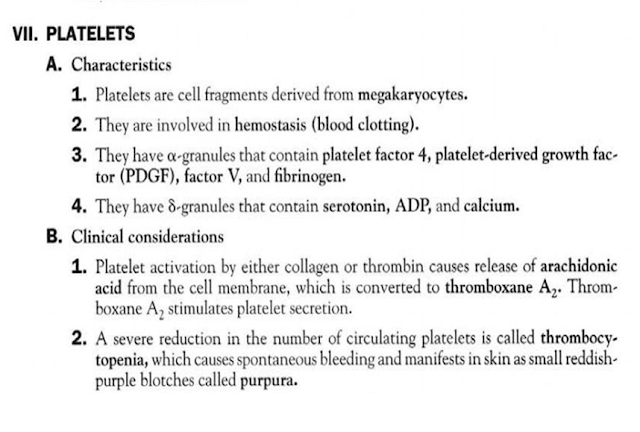 Platelets contain a well-developed cytoskeleton. At the periphery of the cell is a marginal band of microtubules which depolymerise at the onset of platelet aggregation. The cytoplasm is rich in the contractile proteins actin and myosin which are involved in the functions of clot retraction and extrusion of granule contents as part of degranulation.

Located deep to the marginal band of microtubules and also scattered throughout the cytoplasm is the dense tubular system (DTS) consisting of narrow membranous tubules which contain a homogeneous electron-dense substance. This system is believed to be an intracellular store of calcium which is released into the platelet cytosol following signaling from platelet surface receptors and secondary messengers. 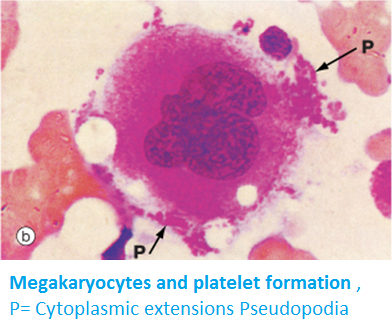 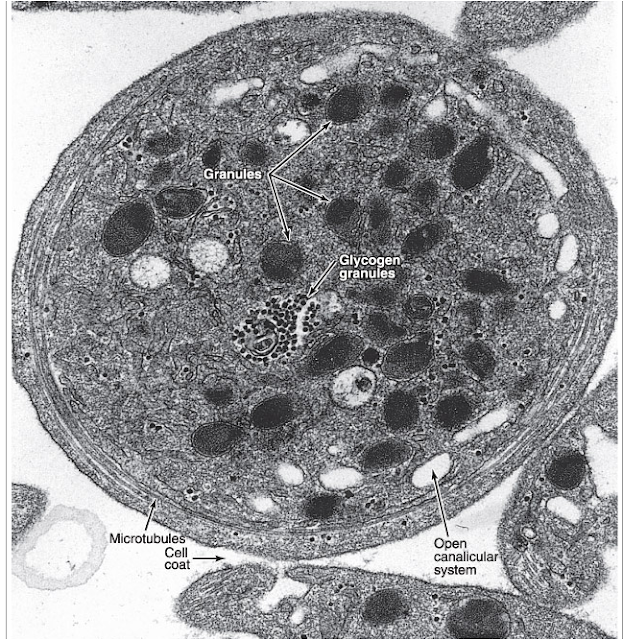 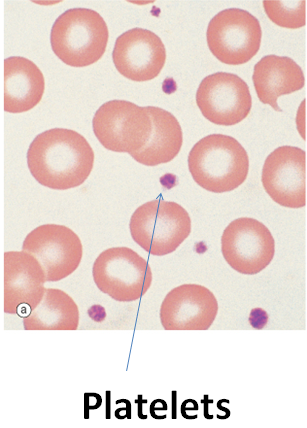 Platelets contain a system of interconnected membrane channels the surface-connected canalicular system (SCCS) which is in continuity with the external environment via external pits. Alpha granules fuse with the SCCS as part of secretion of their contents 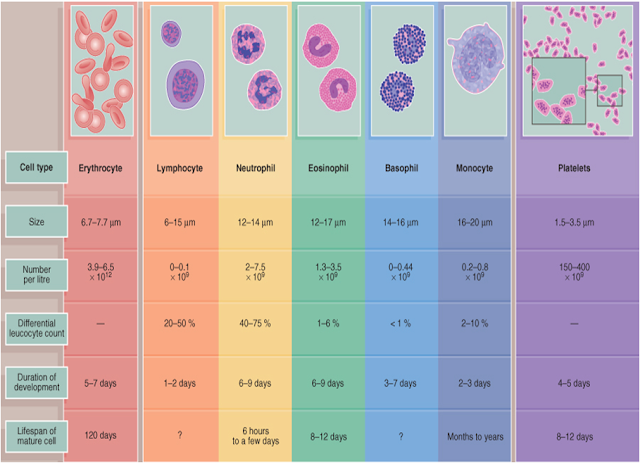 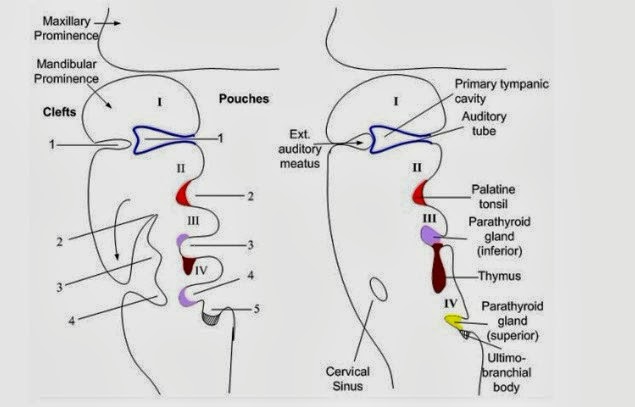