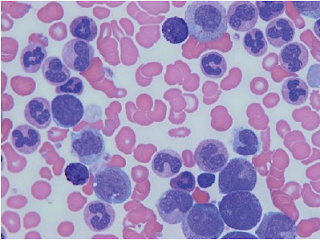 A clonal expansion of a hematopoietic stem cell possessing a reciprocal translocation between chromosomes 9 and 22.


This translocation results in the head-to-tail fusion of the breakpoint cluster region (BCR) gene on chromosome 22 with the ABL gene located on chromosome 9.

Fatigue, malaise, and weight loss or  splenic enlargement and symptoms, such as early satiety and left               upper quadrant pain or mass.

Granulocyte or platelet dysfunction, such as infections, thrombosis, or bleeding.

Minimal to moderate splenomegaly; mild hepatomegaly
Lymphadenopathy and myeloid sarcomas are unusual except late in the course of the disease; poor prognosis


Bone marrow cellularity is increased, with an increased myeloid to erythroid ratio. The marrow blast percentage is generally normal to less than 5%

The cytogenetic hallmark of CML, is the t(9;22)


Hydroxyurea induces rapid disease control
Busulphan, an alkylating agent  acts on early progenitor
Interferon – if all other options have failed; mechanism is unknown

Intensive leukapheresis may control the blood counts in chronic-phase CML
leukostasis-related complications such as pulmonary failure or cerebrovascular accidents,
Splenectomy for symptomatic relief of painful splenomegaly unresponsive to imatinib or chemotherapy, or for significant anemia or thrombocytopenia associated with hypersplenism. Splenic radiation

The Patient
The Donor
Sex mismatch has an adverse effect on transplantation, with worse outcome associated with a female donor and male recipient. This has been attributed to GVHD against the male histocompatibility Y antigen.