The kidneys are reddish brown and lie behind the peritoneum high up on the posterior abdominal wall on either side of the vertebral column.
They are largely under cover of the costal margin.
The right kidney lies slightly lower than the left kidney because of the large size of the right lobe of the liver.
On the medial concave border of each kidney is a vertical slit that is bounded by thick lips of renal substance and is called the hilum.
The hilum extends into a large cavity called the renal sinus. The hilum transmits, from the front backward, the renal vein, two branches of the renal artery, the ureter, and the third branch of the renal artery (VAUA).
Lymph vessels and sympathetic fibers also pass through the hilum. 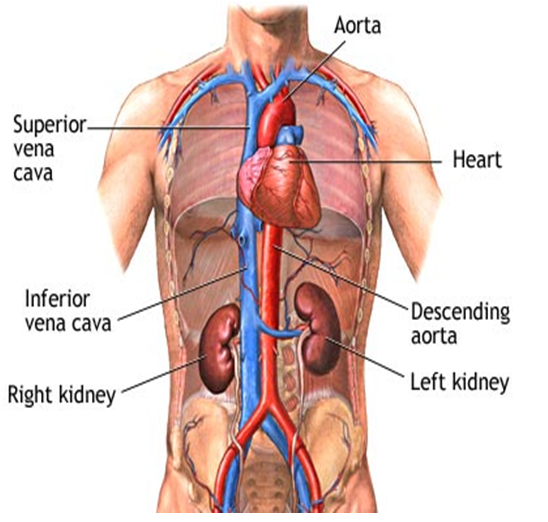 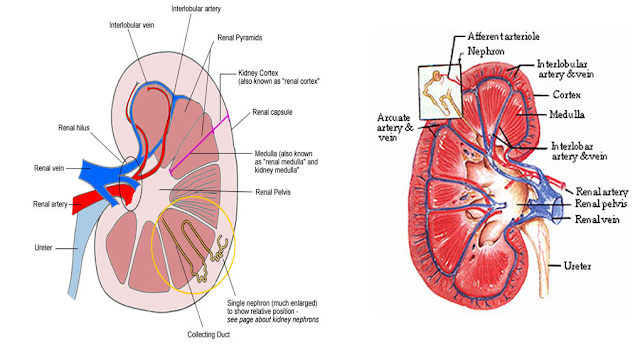 Anterior and posterior relation of kidneys

Anteriorly: The suprarenal gland, the liver, the second part of the duodenum, and the right colic flexure
Posteriorly: The diaphragm; the costodiaphragmatic recess of the pleura; the 12th rib; and the psoas, quadratus lumborum, and transversus abdominis muscles. The subcostal (T12), iliohypogastric, and ilioinguinal nerves (L1) run downward and laterally.

Anteriorly: The suprarenal gland, the spleen, the stomach, the pancreas, the left colic flexure, and coils of jejunum
Posteriorly: The diaphragm; the costodiaphragmatic recess of the pleura; the 11th (the left kidney is higher) and 12th ribs; and the psoas, quadratus lumborum, and transversus abdominis muscles. The subcostal (T12), iliohypogastric, and ilioinguinal nerves (L1) run downward and laterally. 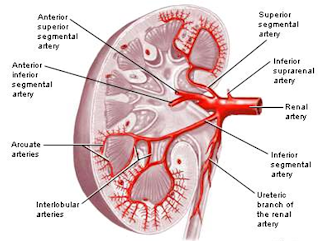 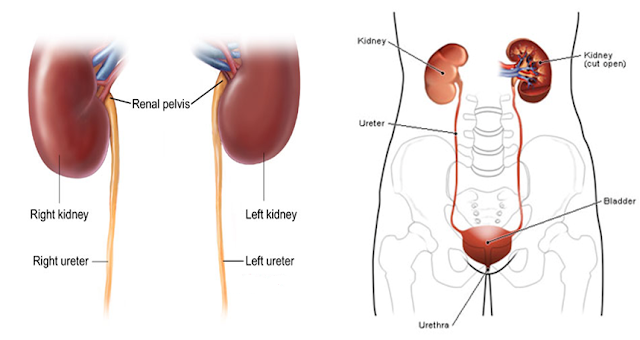 Anteriorly: The duodenum, the terminal part of the ileum, the right colic and ileocolic vessels, the right testicular or ovarian vessels, and the root of the mesentery of the small intestine
Posteriorly: The right psoas muscle, which separates it from the lumbar transverse processes, and the bifurcation of the right common iliac artery

Anteriorly: The sigmoid colon and sigmoid mesocolon, the left colic vessels, and the left testicular or ovarian vessels
Posteriorly: The left psoas muscle, which separates it from the lumbar transverse processes, and the bifurcation of the left common iliac artery
The inferior mesenteric vein lies along the medial side of the left ureter

Congenital Abnormalities of the Kidney

Rare autosomal recessive disease
Presents in infancy with progressive and often fatal renal failure
c. Gross
Bilaterally enlarged kidneys
Multiple small cysts in the cortex and medulla
The cysts are oriented in a radial fashion with their long axis at right angles to the capsule
May also have multiple hepatic cysts and congenital hepatic fibrosis


Other mutations involvePKD2 and PKD3 genes 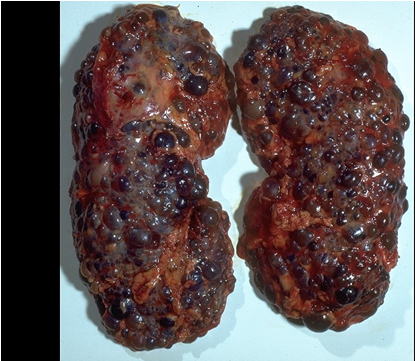