Differentiation and anaplasia:
Apply to the parenchymal cells of neoplasms 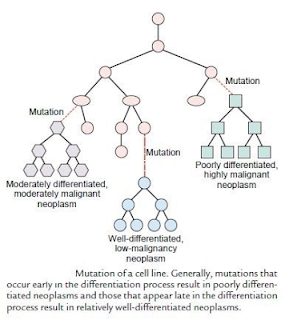 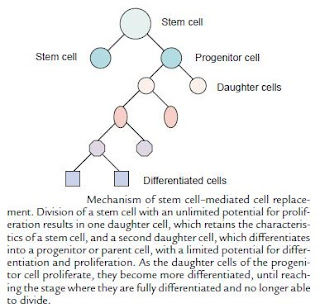 Lack of differentiation
Example of anaplastic tumors = malignant neoplasms composed of undifferentiated cells
More rapidly growing and the more anaplastic a tumor, the less likely it is that there will be specialized functional activity

Pleomorphism – variation in size and shape of both cell and nuclei
Hyperchromatic nuclei; nuclei contain an overabundance of DNA
Nuclei are too large for the cell
Nuclear to cytoplasmic ratio may reach 1:1 instead of normal 1:4 or 1:6
Chromatin is often coarsely clumped and distributed along the nuclear mbr
Usually see large nucleoli
High proliferative activity
Large numbers of mitoses
Atypical, bizarre mitotic figures sometimes w/ tripolar, quadripolar, or multipolar spindles
Tumor giant cells
Some possess only a single huge polymorphic nucleus, others w/ two or more nuclei
Loss of normal polarity; grow in sheets or large masses tumors in an anarchic, disorganized fashion
Vascular stroma is often scant; large central areas may undergo necrosis


Variations in cell growth and differentiation: normal and abnormal.

Some examples of physiological hyperplasia

Some examples of physiological hypertrophy

Some examples of pathological hyperplasia

Some examples of pathological hypertrophy 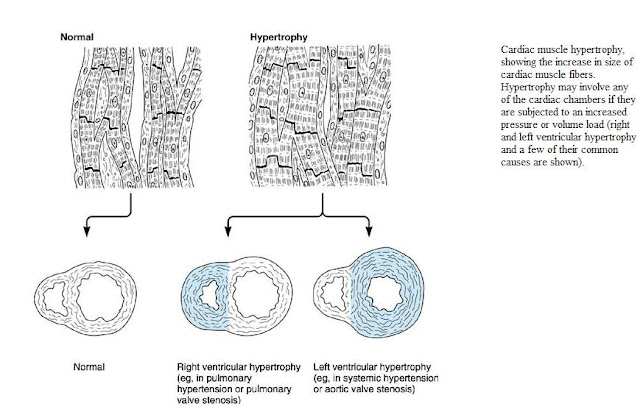 Cardiac muscle of the left ventricle undergoes hypertrophy because of increased outflow pressure eg systemic hypertension, aortic valve disease
Cardiac muscle of the right ventricle undergoes hypertrophy because of increased outflow pressure eg pulmonary hypertension, pulmonary valve disease.
Arterial smooth muscle undergoes hypertrophy in hypertension.
Decreased size of tissue or organ
This can occur in a tissue or organ due to developmental failure, or to reduction in size of a previously normal organ. This is atrophy.
Atrophy is a decrease in cell size and/or number in a previously normal tissue or organ. Decrease in cell number is mediated by apoptosis; decrease in cell size by a reduction in cell growth. Atrophy can be physiological or pathological.

Some examples of physiological atrophy 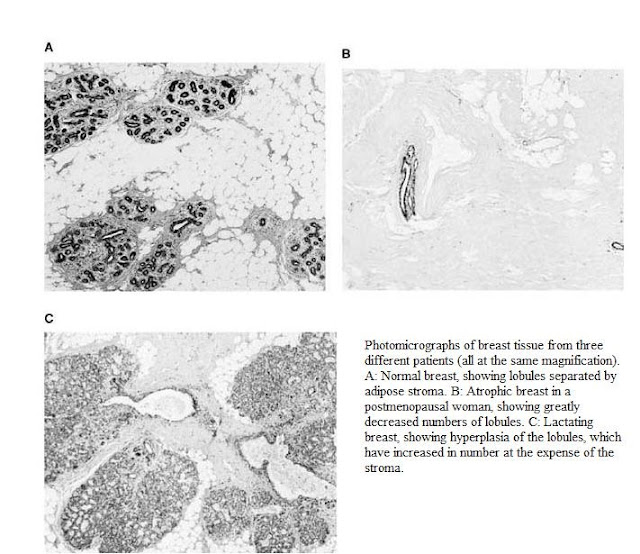 Some examples of pathological atrophy

Abnormal differentiation
When mature tissues grow and differentiate abnormally, they can undergo metaplasia, dysplasia or both.

Is defined as the transformation of one fully differentiated cell type into another.
Is an adaptive response to environmental stress, usually chronic irritation or inflammation; metaplastic tissues are better able to withstand the adverse environmental changes than are normal tissues
Is caused by activation and/or repression of groups of genes involved in the maintenance of cellular differentiation
There is no intrinsic gene defect (as there is in neoplasia), therefore metaplasia is reversible.
But, metaplastic tissues are more genetically unstable than their normal counterparts, so they may undergo further transformation to dysplasia and neoplasia
Can affect epithelial or connective tissue cells

Epithelial metaplasia can be:

Some examples of Squamous metaplasia are:

Some examples of Glandular metaplasia are:

Mesenchymal metaplasia is much less common than epithelial metaplasia. There are three main types:

Dysplasia refers to cells of abnormal phenotype that are not yet neoplastic, but are predisposed to be. 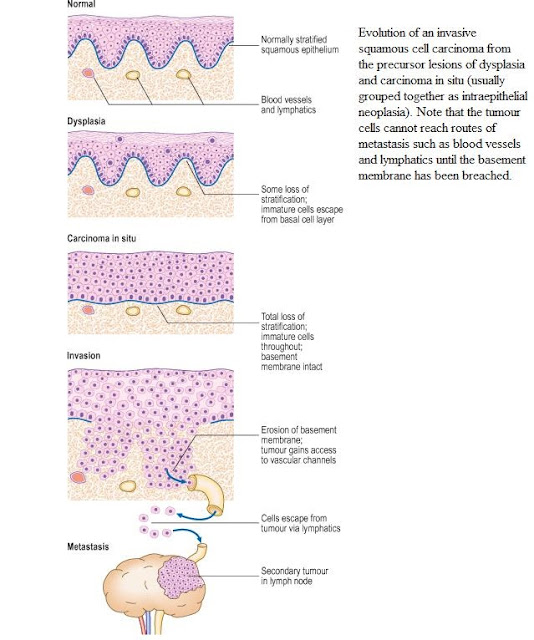 Encountered primarily in the epitheli
It is a premalignant process.
It is often preceded by metaplasia.
It is usually irreversible.
There is disordered maturation: the phenotype of the abnormal cells approaches that of malignant cells. Loss in uniformity of the individual cells as well as a loss in their architectural orientation. It is characterised by increased cell division, atypical cell morphology and lack of differentiation.
Considerable architectural anarchy
Considerable pleomorphism
Hyperchromatic nuclei
Nuclei are too large for cell
Increase numbers of mitotic figures, but conform to normal patterns; may appear in abnormal location w/in the epithelium 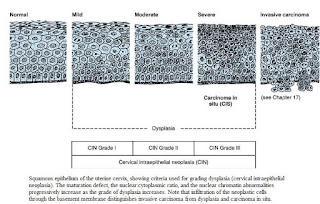 When dysplastic changes are marked and involve the entire thickness of the epithelium
Epithelial dysplasia almost invariably comes before the appearance of cancer
Dysplasia does not necessarily progress to cancer.
at May 15, 2013
Email ThisBlogThis!Share to TwitterShare to FacebookShare to Pinterest
Labels: Oncology, Pathology