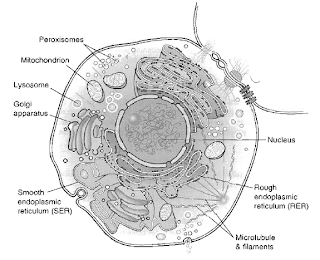 RER is a single, lipid bilayer continuous with the outer nuclear membrane. It is organized into stacks of large flattened sacs called cisternae that are studded with ribosomes on the cytoplasmic side.
RER synthesizes proteins that are destined for the Golgi apparatus, secretion, the plasma membrane, and lysosomes. RER is very prominent in cells that are specializedin the synthesis of proteins destined for secretion (e.g., pancreatic acinar cells).

SER is a network of membranous sacs,vesicles, and tubules continuous with the RER, but lacking ribosomes.
SER contains enzymes involved in the biosynthesis of phospholipids, triglycerides, and sterols.

Removal of the phosphate group from glucose-6-phosphate by the enzyme glucose-6 phosphatase, an integral membrane protein of the SER. This controls the formation of free glucose from glycogen and via gluconeogenesis.


Lipolysis begins in the SER with the release of a fatty acid from triglyceride. The SER is also the site where lipoprotein particles are assembled


In striated muscle the SER is known as the sarcoplasmic reticulum (SR).The sequestration and release of calcium ions takes place in the SR.

The Golgi apparatus consists of disc-shaped smooth cisternae that are assembled In stacks (dictyosomes), having a diameter of approximately 1micro.m and associated with numerous small membrane-bound vesicles.
The Golgi apparatus has two distinct faces:
The cis (forming) face is associated with the RER.
The trans (maturing) face is often oriented toward the plasma membrane.
The transmost region is a network of tubular structures known asthe trans-Golgi network (TGN)


Functions of the golgi apparatus

Characterized by elevated levels of proinsulin in the serum resulting from the failure of a peptidase to cleave proinsulin to insulin and C- peptide in the Golgi apparatus.
The clinical manifestations are similar to those seen in patients with noninsulin dependent diabetes.

Lysosomes are spherical membrane-enclosed organelles that are approximately 0.5 micro.m in diameter and contain enzymes required for intracellular digestion.

Several genetic diseases are associated with the impairment or absence of peroxisomes. These patients fail to oxidize very long chain fatty acids and accumulate bile acid precursor.The four most common disorders are:

Mitochondria have two membranes. They are about 0.5 micro.m in width and vary in length from 1 to 10 micro.m. They synthesize adenosine triphosphate (ATP), contain their own double-stranded circular DNA, and make some of their own proteins.
Mitochondria have several compartments.

The intermembrane compartment is the space between the inner and outer membranes. It contains enzymes that use ATP to phosphorylate other nucleotides (creatine phosphokinase and adenylate kinase).

The matrix is enclosed by the inner membrane and contains:

The cytoskeleton provides a supportive network of tubules and filaments in the cytoplasm of eukaryotic cells. It is composed of microtubules, intermediate filaments, and microfilaments.

at May 29, 2012
Email ThisBlogThis!Share to TwitterShare to FacebookShare to Pinterest
Labels: Cytobiology