Why is fetal monitoring important?
To provide insight that may affect fetal outcome

WHAT IS THE AIM OF MONITORING?

WHICH PATIENTS ARE EXPECTED TO BENEFIT
FROM THIS TESTING?

WHAT ARE THE METHODS AVAILABLE FOR FETAL MONITORING IN LABOR?

WHAT IS THE AIM OF MONITORING ?
To decrease the risk of intrapartum fetal asphyxia

To detect hypoxia and so prevent asphyxia which may cause either death or permanent neurological damage as cerebral palsy, mental deficiency or both.


Fetal movement counting
Maternal perception of a decrease in fetal movements may be a sign of impending fetal death
3 movements in 30 minutes.
10 fetal movements noticed in 10hrs or less, the fetus must probably is in good health

The nonstress test (NST) is performed by auscultation of the fetal heart rate using an electronic monitor. 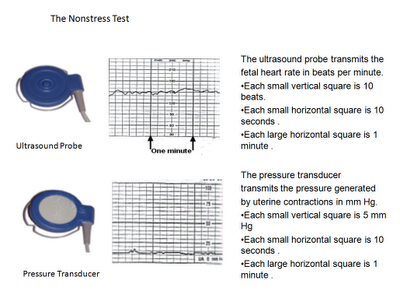 Reactive: 2 or more accelerations in 20 minutes.
Accelerations: an increase of at least 15 BPM above the baseline lasting at least 15 seconds.
Fetal stimulation by sound (vibroacaustic stimulation) may be used to elicit a response.

Non reactive: Less than 2 accelerations in a 20-minute period.
May extend the testing period to 40 minutes or perform a back-up test.

Determination of the baseline FHR is done between contractions
Baseline is rounded in increments of 5 bpm example; if the FHR is running 125-135 then the baseline FHR should be documented as 130 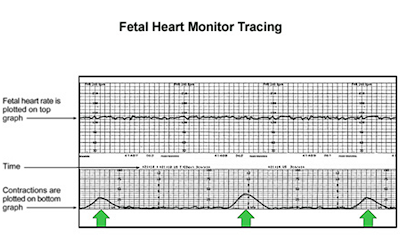 Can affect FHR by increasing or decreasing the rate in association with any given contraction.
3 primary mechanisms by which UCs can cause a decrease in FHR are by compression of

Periodic: Refers to changes in the FHR that occur with or in relationship to contractions

Episodic: Refers to changes in the FHR that occur independent of contractions 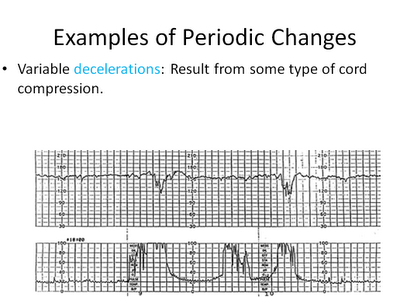 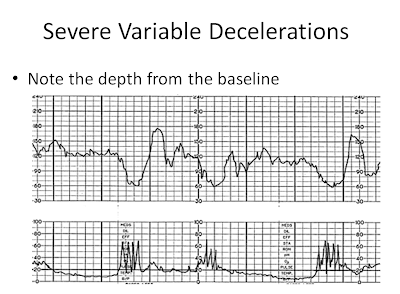 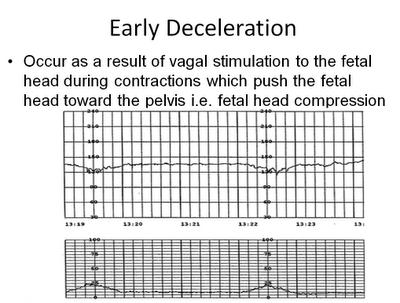 Occur in response to utero-placental insufficiency. Blood flow to the fetus is compromised and there is less oxygen available to the fetus) 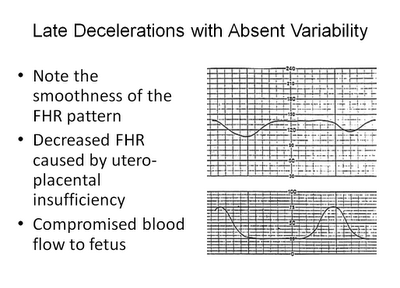 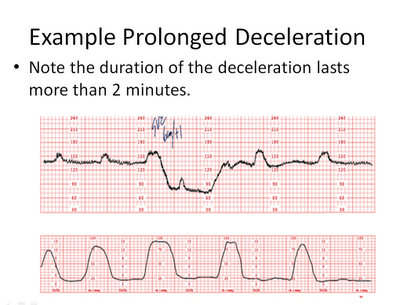 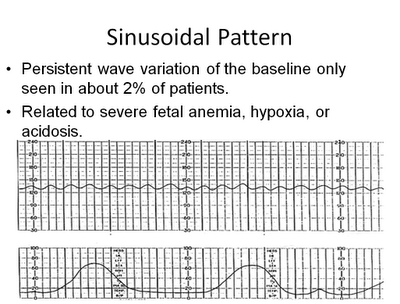 Frequency: How often they occur? They are timed from the beginning of a contraction to the beginning of the next contraction.
Regularity: Is the pattern rhythmic?
Duration: From beginning to end - How long does each contraction last?
Intensity: By palpation mild, moderate, or strong.
By IUPC (intra-uterine pressure catheters) intensity in mmHg
Subjectively: Patient description 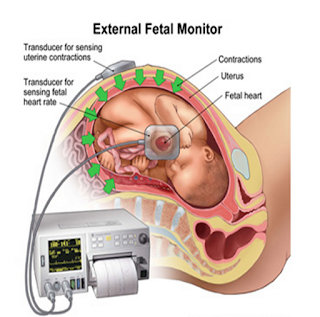 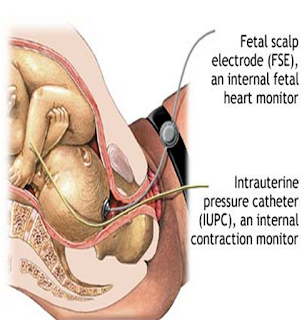 The BPP is another test for the evaluation of fetal well-being . It combines the NST with the observation by ultrasound of 4 variables: 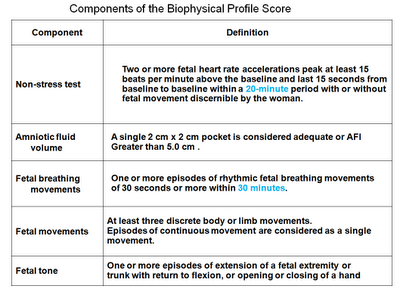 The MBBP is an excellent test for evaluation of the fetal well being.

Start  NST in standard manner. If a spontaneous acceleration not seen within 5 min, a single1-2sec, sound stimulation is applied in the lower abdomen with the artificial larynx. This stimulus may be repeated up to three times if necessary.

A four quadrant amniotic fluid volume is assessed by placing an ultrasound transducer perpendicular to the wall of the uterus in four abdominal quadrants and measuring the largest vertical amniotic fluid pocket. A four-quadrant sum of 5 cm or greater is considered normal.

The  use of  Doppler ultrasound for the evaluation of the fetal circulation is based on the physical principle of change in frequency of a sound wave when it is reflected by a moving object. During Doppler studies fetal and maternal vessels are interrogated with ultrasound waves .

The Doppler frequency shift caused by the moving red cells is submitted to spectrographic analysis and represented graphically as a waveform. These waveforms represent  changes in the velocity of the blood flowing through the vessels.

A poor indicator of fetal compromise or adaptation to the placental abnormality but does identify patients at risk for increased perinatal mortality.
Strong association between high systolic to diastolic ratios and IUGR.

An increase in the vascular resistance of the fetoplacental unit leads to a decrease in end diastolic flow velocity or its absence in the flow velocity waveform.
Abnormal waveforms reflect the presence of a structural placental lesion.
Abnormal Doppler results require specific management protocols and intensive fetal surveillance.


Uses : plays a vital role in the diagnosis of fetal cardiac defects .
assessment of the hemodynamic responses to fetal hypoxia and anemia.
diagnosis of other  non-cardiac malformations.

Doppler velocimetry of the umbilical arteries

40% of combined ventricular output is directed to the placenta by umbilical arteries.
Assessment of umbilical blood flow provides information on blood perfusion of the fetoplacental unit.
Low vascular impedance allows a continuous forward blood flow throughout the cardiac cycle

The volume flow in the UAs increases with advancing gestation. The high detected in the first trimestvascular impedance er gradually decreases. It is attributed to growth of placental unit and increase in the number of the functioning vascular channels.

characteristic saw-tooth appearance of arterial flow in one direction and continuous umbilical venous blood flow in the other. 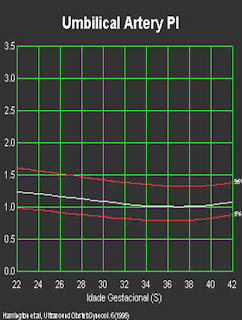 
at May 23, 2012
Email ThisBlogThis!Share to TwitterShare to FacebookShare to Pinterest
Labels: OBG