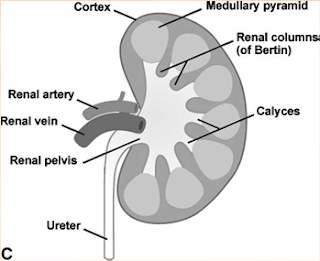 The kidneys are located in the retroperitoneum on the iliopsoas muscles. Their longitudinal axes point laterally downward. Their lower poles are directed forward and lateral.
An imaginary line joining the bases of the medullary pyramids separates the cortical substance of the kidney from the medulla.
CEC appears Hyperechoic and consists of vessels, connective tissue, renal sinus fat, and the actual renal pelvis. 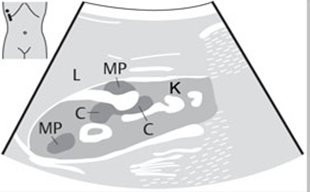 Transducer: 3.5–5.0 MHz
Patient generally supine. Left lateral decubitus occasionally used (esp. left kidney)
Right kidney: The lower pole is occasionally obscured by the right colic flexure but is accessible to scanning from the posterior side.
Left kidney: Scanning from the posterolateral side is advantageous as it avoids overlying gas in the colon and gastric fornix.
Always scan the kidneys during inspiration and expiration to ensure that they are completely visualized (rib shadows and bowel gas are often troublesome) and move normally with respiration (i.e., are not fixed by perirenal abscesses).
Both kidneys are systematically surveyed in longitudinal and transverse planes.

May be constitutional or may result from hypoplasia or ectopia, making the organs difficult to locate

May be constitutional or may result from duplex kidneys, unilateral aplasia, acromegaly, or compensatory enlargement of the remaining kidney after nephrectomy

Located along the path of its normal ascent, usually in the lesser pelvis near the iliac vessels; “lower abdominal mass”

Characterized by enlargement of the contra lateral kidney

Careful inspection of the renal fossa in a close-up view should reveal a small kidney with normal-appearing parenchyma.

Shrunken kidney that displays abnormalities in its contours, internal echo pattern, or both

A bilateral “horseshoe kidney” initially appears as two normal kidneys, but the lower poles are found to be fused across the midline in the lesser pelvis.

Eighty percent of infections are caused by Escherichia coli.
The remainder of cases is mostly caused by other gram-negative organisms, including Klebsiella, Proteus, Enterobacter, Pseudomonas, Serratia, and Citrobacter.

Fungal infections are also present especially in the setting of diabetes, immunosuppression

Present with localized complaints of flank pain and costovertebral angle tenderness accompanied by generalized symptoms of fever, chills, nausea, and vomiting.
In addition, these findings may be accompanied by further lower urinary tract symptoms, including dysuria, increased urinary frequency, and voiding urgency

Laboratory abnormalities indicative of the underlying infection can be expected, including neutrophilic leukocytosis on the complete blood count and elevated erythrocyte sedimentation rate

In severe infection elevated S. Creatinine may be present due to interference with Renal functions.

Urine cultures, which should be collected before starting antibiotic therapy, will almost exclusively demonstrate infection from gram-negative bacteria.

A common clinical presentation is anemia, leukocytosis, and flank pain.
A majority of patients have urinary obstruction due to nephrolithiasis, at times even a staghorn calculus.

US reveal calculi, hydronephrosis, or a renal tumor. 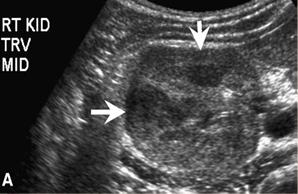 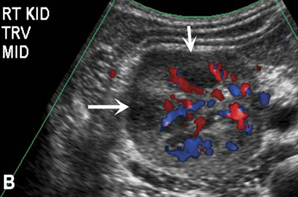 80% cases are respiratory TB, 20% may be extra pulmonary.

Latent foci may result in kidney lesions many years following primary infection, though only 5% of patients who have active tuberculosis will have cavitary lesions in the urinary tract

Diagnosis of urinary tract tuberculosis can be established through a urine culture that demonstrates growth of M tuberculosis
These patients have a sterile pyuria, microscopic hematuria, and an acidic urine

Ultrasound findings in the diagnosis of renal tuberculosis have traditionally been described as limited
Granulomatous mass lesions in the renal parenchyma can be seen as masses of mixed echogenicity, with or without necrotic areas of caseation and calcifications

In addition, findings of mucosal thickening of the renal pelvis and ureter, ureteral stricture, and hydronephrosis are seen 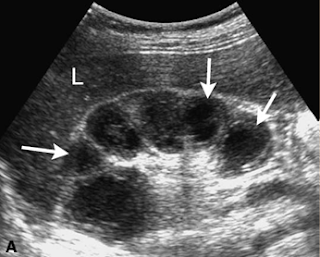 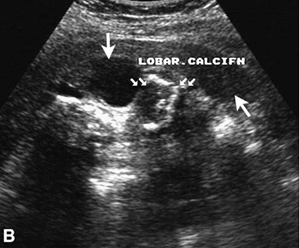 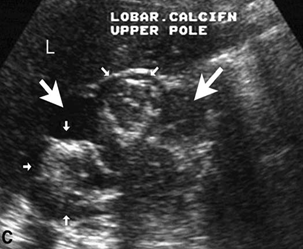 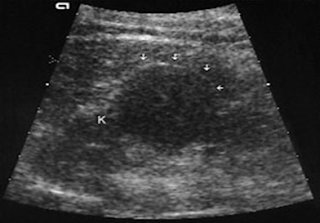 RCC is the most common primary malignancy of the kidney. It accounts for 2% of all malignancies.

classic clinical triad of hematuria, abdominal pain, and abdominal mass is seen in less than 10% of patients.
About 20% to 40% present with paraneoplastic syndrome, which includes anemia, fever, hypertension, hypercalcemia, and hepatic dysfunction

Most common sites of metastasis include Lungs and Bones.

The goal of imaging is detection, diagnosis, and staging of RCC

Ultrasonography is less sensitive in detecting small renal lesions, especially those that do not deform the contour of the kidney. The sensitivity of CT and USG for detection of lesions 3 cm and less is 94% and 79%, respectively

The sonographic spectrum of RCCs varies from hypoechoic to hyperechoic solid mass lesions
RCCs 3 cm and smaller are predominantly hyperechoic. 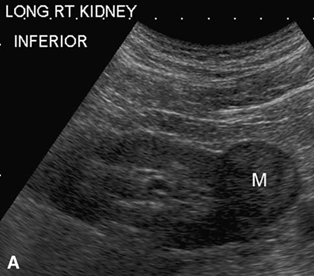 Urolithiasis, the presence of renal calculi within the urinary tract, is the most common cause of extrarenal obstructive uropathy

Hydronephrosis refers to the structural change, describing a dilatation of the calyces and renal pelvis. Hydroureter, or ureteral dilatation, sometimes accompanies hydronephrosis

Calcium-containing, or calcareous, stones are the most common type, accounting for 60% to 80% of all uroliths, followed by uric acid stones, which account for 5% to 10%
Calcareous stones are typically uniform in density and are easily detected on plain films and noncontrast CT.

Calcareous stones which are more common are very echogenic on ultrasound and we may find them in the renal pelvis or in the renal calyces. 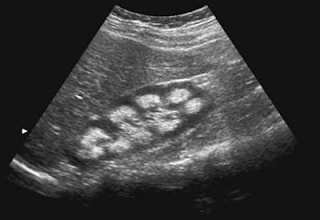 Glomerulonephritis is an inflammatory condition which affects the glomeruli of the kidney.
It may be either acute or chronic, and frequently follows prolonged infection.

Patients may present in acute renal failure, with oliguria or anuria, or with features of nephrotic syndrome such as oedema, proteinuria and hypoalbuminaemia

In the acute stages the kidneys may be slightly enlarged; changes in the echogenicity of the cortex may be observed.

By hematogenous route
May produce irregular thickening of bladder
Loss of corticomedullary junction
In 25% cases,calcification is seen

Stone as small as 1.5 cm can be seen
Calculus of size >6cm will cast shadow

Commonly seen at the iliac fossa