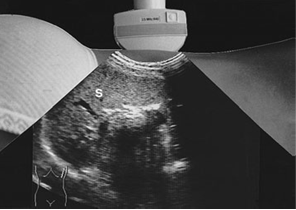 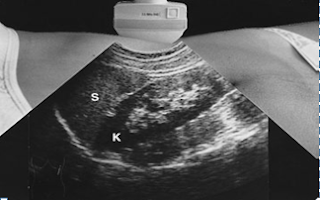 The spleen is a subphrenic organ located in the left side of the abdomen.
Its longitudinal axis is generally oriented parallel to the 10th rib.
The visceral surface of the spleen is closely related to the left kidney and
adrenal gland and to the tail of the pancreas.
The spleen has smooth borders but is frequently notched at the hilum 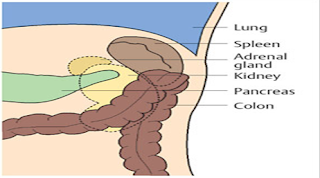 The normal spleen has a uniformly hypoechoic echo pattern.
The spleen is crescent- or wedge-shaped in longitudinal section and elliptical in cross section (left subcostal scan, visible only in a magnified view).
Normal dimensions: length < 120 mm, thickness < 50mm, width < 70mm.
Gentle respiration is frequently more successful than deep inspiration, as the latter brings the lung bases downwards and may obscure a small spleen altogether.

Causes of Splenomegaly include 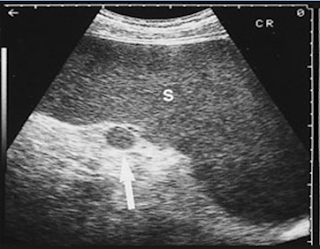 Marked splenomegaly with a homogeneous echo pattern of the
splenic parenchyma (S) in non-Hodgkin lymphoma. The arrow points to an accessory spleen.

Lymphoma is the most common malignant disease affecting the spleen. Lymphomas comprise a number of diseases, all malignant, which affect the lymphocytes.
Malignant cells can infiltrate the spleen, lymph nodes, bone marrow and thymus and can also involve the liver, gastrointestinal tract, kidney and other organs.
Approximately 3% of malignant diseases are lymphomas.

Splenic involvement may be found in up to 60% of lymphomas as a result of dissemination of disease.
There are two main groups: Hodgkin’s and non-Hodgkin’s lymphomas

Prognosis depends upon the type of the disease, which must be determined histologically, and its stage.

Both ultrasound and CT may be used for staging: ultrasound demonstrates splenic involvement with greater sensitivity than CT, and CT is superior in demonstrating para-aortic and iliac lymph nodes

Ultrasound Appearance: - In many cases the spleen is not enlarged.
- Lymphoma may produce a diffuse splenic enlargement with normal, hypo or hyperechogenicity.
- Focal lesions are present and They tend to be hypoechoic and may be single or multiple, and of varying sizes
- A differential diagnosis of metastases should be considered in the presence of multiple solid hypoechoic splenic lesions, but most cases are due to lymphoma

Leukaemia (literally meaning ‘white blood’, from the Greek) is characterized by an increased number of malignant white blood cells.
Unlike lymphoma, which affects the lymphatic system, leukaemia affects the circulation.
The bone marrow becomes infiltrated with malignant cells which cause the blood to have increasing levels of immature blood cells
There are two main types, myeloid and lymphoid, both of which can be either acute or chronic

Patients present with fatigue, anaemia, recurrent infections and a tendency to bleed internally.
The patient’s inability to overcome infections may eventually lead to death.
Chemotherapy is successful in curing acute lymphoblastic leukaemia in approximately half the patients, and may induce remission in others.

Ultrasound Changes:
Leukaemia produces diffuse splenic enlargement, but rarely with any change in echogenicity.
Abdominal lymphadenopathy may also be present

Splenic cysts have a relatively low incidence, but are nevertheless the most common benign mass found in the spleen. They demonstrate the usual acoustic characteristics of well-defined capsule and no internal echoes.
Splenic cysts may occasionally be associated with adult polycystic disease.
Other causes of cystic lesions in the spleen include post-traumatic cysts (liquefied haematoma), hydatid cysts (Echinococcus granulosus parasite) or cystic metastases (for example from primary ovarian carcinoma, which may contain mucin).
Haemorrhage is a potential complication of cysts and large cysts are removed before they ruoture. 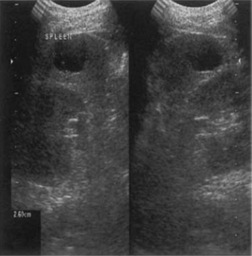 Splenic abscesses are relatively uncommon compared with their incidence in the liver. They usually result from blood-borne bacterial infection, but can also be due to amoebic infection, post-traumatic or fungal infection.

Patients with splenomegaly resulting from typhoid fever, malaria and sickle cell disease are particularly predisposed to the formation of multiple pyogenic abscesses in the spleen.
Splenic abscesses are associated with immunosuppressed patients, patients with AIDS and those on high-dose chemotherapy – these patients are prone to develop fungal abscesses.

Patients present, as might be expected, with LUQ pain and fever.

They may be single or multiple, hyperechoic and homogeneous in the early stages, progressing to complex, fluid-filled structures with increased through-transmission. 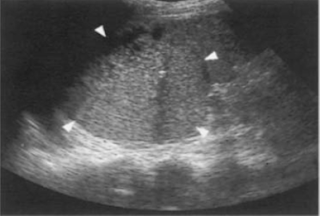 Increased red blood cell destruction, or haemolysis, occurs under two circumstances: when there is an abnormality of the red cells, as in sickle cell anaemia, thalassaemia or hereditary spherocytosis, or when a destructive process is at work, such as infection or autoimmune conditions. Fragile red cells are destroyed by the spleen, which becomes enlarged.

Sickle-cell anaemia is most prevalent in the black American and African populations. Progression of the disease leads to repeated infarcts in various organs, including the spleen, which may eventually become shrunken and fibrosed. Patients have (non-obstructive) jaundice because the increased destruction of red blood cells (RBCs) releases excessive amounts of bilirubin into the blood. 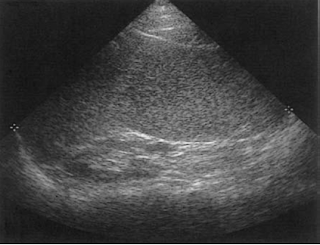 Splenic infarction is most commonly associated with endocarditis, sickle cell disease and myeloproliferative disorders and also with lymphoma and cancers.
It usually results from thrombosis of one or more of the splenic artery branches.
Because the spleen is supplied by both the splenic and gastric arteries, infarction tends to be segmental rather than global.
Patients may present with LUQ pain, but not invariably.

Initially the area of infarction is hypoechoic and usually wedge-shaped, solitary and extending to the periphery of the spleen. The lesion may decrease in time, and gradually fibrose, becoming hyperechoic.

Splenic infarct due to an embolus following recent liver resection. Colour Doppler of the same patient demonstrates a lack of perfusion in the infarcted area
at August 08, 2011
Email ThisBlogThis!Share to TwitterShare to FacebookShare to Pinterest
Labels: Radiology