Doctor needs to know the normal progress of decomposition so that he does not misinterpret these normal changes for signs of an unnatural death and,
Secondly, because they can be used in determining how long the individual has been dead.

Immediate fall in bl. pressure & supply of oxygen ceases.
With loss of neuronal activity, all nervous activity ceases, the reflexes are lost and breathing stops.

If eyelids open after death, in few hours a film cell debris and mucous form two yellow triangles on scelera on either side of iris, which become brown and then black called ‘tache noir’ within 3-4 hours.

The retinal vessels, viewed with an ophthalmoscope, show the fragmentation of the columns of blood,called ‘trucking’ as it suggests the movement of railway wagons.

The eyes lose their intraocular tension.
The muscles rapidly become flaccid (primary flaccidity), but may respond to touch and other forms of stimulation for some hours after cardiac arrest.

Discharges of the dying motor neurons may stimulate small groups of muscle cells and lead to focal twitching.

The fall in blood pressure and cessation of circulation usually render the skin, conjunctivae and mucous membranes pale. The skin of the face and the lips may remain red or blue in colour in hypoxic/congestive deaths.

Loss of muscle tone in the sphincters may result in voiding of urine; this is such a common finding that no relationship with deaths from epilepsy or asphyxia can be established.

Emission of semen is also found in some deaths; the presence of semen cannot be used as an indicator of sexual activity shortly before death.

Regurgitation is a very common feature of terminal collapse and it is a common complication of resuscitation.

occurs within muscle cells as a result of lack of oxygen
In the face of low ATP and high acidity, the actin and myosin fibres bind together and form a gel.
If muscle glycogen levels are low or if the muscle cells are acidic at the time of death as a result of exercise, the process of rigor will develop faster.
Electrocution is also associated with rapidly developing rigor and this may be due to the repeated stimulation of the muscles.
Conversely, in the young, the old or the emaciated, rigor may be extremely hard to detect because of the low muscle bulk.
First detectable in the smaller muscle groups such as those around the eyes and mouth, the jaw and the fingers.

It appears to ‘spread’ down the body from the head to the legs as larger and larger muscle groups are rendered stiff.
Rigor mortis is a chemical process enhanced by heat, so colder the temperature the slower the reactions and vice versa. In a cold body, the onset of rigor will be delayed.
body lying in front of a fire or in a bath of hot water will develop rigor quickly.
In temperate conditions rigor can be first detected (begins)in the face between 1 and 4 hours and in the limbs between 4 and 6 hours after death, and the strength of the rigor increases for the next 6–12 hours. Once established, rigor will remain static until decomposition.
The secondary flaccidity becomes apparent from 24 to 50 hours after death with the onset of putrefaction.
It is best to test for rigor across a joint using very gentle pressure from one or two fingers only.or at eyelids.

CADAVERIC RIGIDITY OR SPASM:
the stiffness of muscles that is said to have its onset immediately at death
Most cases are said to be related to individuals who are at high levels of emotional or physical stress immediately before death
the mechanism for this phenomenon is possibly neurogenic 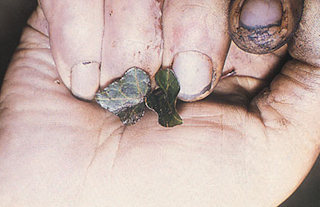 Cadaveric rigidity – a rare condition. This victim grasped at some ivy as he fell into water.

The passive settling of red blood cells under the influence of gravity to the blood vessels in lowest areas of the body is important forensically. It produces a pink or bluish colour and it is this colour change that is called post-mortem hypostasis. also called post-mortem lividity and also suggilation.
Hypostasis is not always seen in a body and it may be absent in the young, the old and the clinically anaemic or in those who have died from severe blood loss.
It may be masked by dark skin colours, by jaundice or by some dermatological conditions.

However, hypostasis occurs only where the superficial blood vessels can be distended.
However, compressed areas will remain pale called blanching.
Blanching may also be caused by pressure of clothing or by contact of one area of the body with another
A body left suspended after hanging will develop deep hypostasis of the lower legs and arms, with none visible on the torso, whereas a body that has partially fallen head first out of bed will have the most prominent hypostatic changes of the head and upper chest.the drowning body has different pm lividity.

The cherry pink colour of carbon monoxide poisoning, the dark red or brick red colour associated with cyanide poisoning, and infection by Clostridium perfringens, which is said to result in bronze hypostasis.
The time taken for hypostasis to appear is so variable that it has no significant role in determining the time of death.
Movement of a body will have an effect on hypostasis 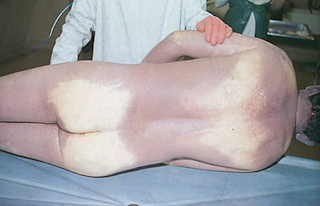 Normal distribution of post-mortem hypostasis in a body which lay on its back after death. The white areas are due to pressure upon the ground. 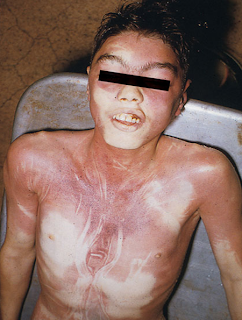 Post-mortem hypostasis on a body found face down on a bed. The linear marks are formed by pressure from creases in the blanket. The pale areas around the mouth and nose are not necessarily signs of suffocation.

COOLING OF THE BODY AFTER DEATH:

Aka algor mortis, is a complex process, not at the same rate through out the body.
Exchange of heat to surrounding occurs only by conduction.
For about half to one hour about death, rectal temperature falls little or not at all. Then, the cooling rate is relatively uniform till 4 degree centigrade.

Postmortem caloricity:
Body temp raised for the 1st 2hrs or so after death, eg. In sunstroke, tetanus, convulsion, septicaemia

Thermometer used to measure rectal temperature is 25 cm long, with a range of 0-50 degree, inserted 8-10cm in rectum for 2mins. The temperature can also be recorded making the hole in the peritoneum and the peritoneal cavity, external auditory meatus, cribiform plate through the nose.
Time since death=normal body temp-rectal temp/rate of temp fall for hours. However, for the formula, we must assume 37 degree rectal temp at the time of death, uniform rate of cooling of whole body.
The rectal temp of an average size naked body reaches the env in about 20hours.

ESTIMATION OF THE TIME OF DEATH:

Of the three historic pathological features that were used to estimate death, only the fall in body temperature has withstood the test of science;
the others – rigor mortis and hypostasis – have now been shown to be utterly unreliable and will not be considered further.

at August 18, 2011
Email ThisBlogThis!Share to TwitterShare to FacebookShare to Pinterest
Labels: Forensic Medicine