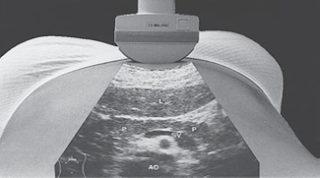 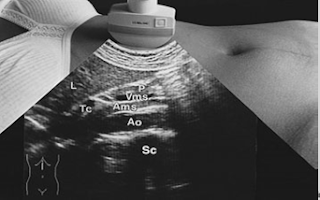 3.5 hz,fasting necessary,supine position
transverse scan at epigastric region
anterior to aorta ,a bright walled sup mesentric artery may be seen in cross section ,ant to which u may see larger splenic vein,lengthwise with comma shaped head towards right
If not seen,can give pt. 2 glass of water to drink and with sitting or erect position,through the acoustic window made by water filled stomach

In , the pancreas is hyperechoic, becoming increasingly so in the elderly, in small children ,it is less echoeic than liver

The main pancreatic duct normally can be visualized and is 2 mm or less.

Identified by particularly splenic vein ,which lies posterior to pancrease,and sup. Mesentric artery ,which is seen as a ring like a bright echogenic wall
No capsule so margin of pancrease is ill defined

most commonly associated with gallstones or alcoholism

Trauma/iatrogenic—damage/disruption of the pancreatic tissue, e.g. in a road traffic accident, or by surgery

Drug-induced— uncommon cause. Some anticancer drugs can

In more severe cases the pancreas is enlarged and hypoechoic due to edema. The main duct may be dilated or prominent.

As the condition progresses, digestive enzymes leak out, forming collections or pseudocysts. These are most frequently found in the lesser sac, near the tail of the pancreas, but can occur anywhere in abdomen.

May diagnose the cause of acute pancreatitis if biliary colics are present. 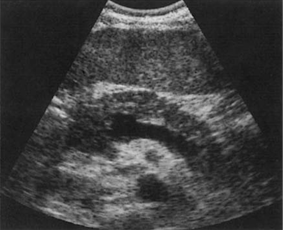 Acute pancreatitis in a patient with alcoholic liver disease. The pancreas is hypoechoic and bulky with a lobulated outline.

Management consists of alleviating the symptoms and removing the cause where possible.

Surgery to remove necrotized or hemorrhagic areas of pancreatic tissue may be undertaken in severe cases.

The most common cause is alcohol abuse

The normal pancreatic tissue is progressively replaced by fibrosis, which may encase the nerves in the coeliac plexus, causing abdominal pain, particularly post-prandially.

The patient has fatty stools (steatorrhoea) due to malabsorption, as there is a decreased capacity to produce the digestive enzymes

The pancreas becomes abnormally hyperechoic.
Irregular dilatation of pancreatic duct
Pseudocyst seen in 25% cases
Calcification may be identified in the pancreatic tissue

Carcinoma of the pancreas is a major cause of cancer-related death.
Most pancreatic carcinomas (60%) are found in the head of the pancreas,
patients present with the associated symptoms of jaundice
The majority (80%) are ductal adenocarcinomas,

Surgical removal of the carcinoma by partial pancreaticoduodenectomy,

The adenocarcinoma, is a solid tumor, usually hypoechoic or of mixed echogenicity, with an irregular border. Because the mass is most frequently located in the head of the pancreas, which lies behind the duodenum, it may be difficult to identify at first.

Endocrine tumors, which arise from the islet cells in the pancreas, include insulinomas, which are benign, and gastrinomas, which are more often malignant. They are usually hypoechoic, well defined, often with a distally dilated main pancreatic duct. tend to arise in the body or tail of pancreas.

The most obvious secondary feature of carcinoma of the head of pancreas is the dilated biliary system. 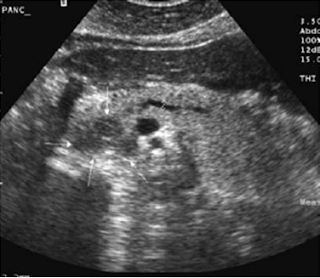 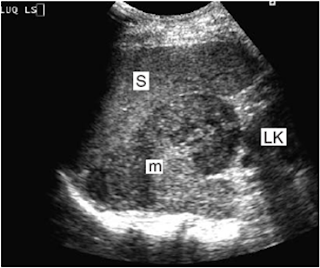 They are relatively uncommon on ultrasound, simply because they are a late manifestation in patients who already have known, widespread disease and in whom investigations are generally considered unnecessary. 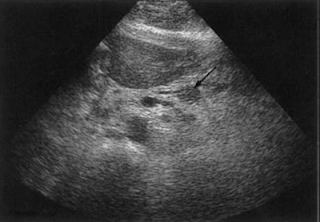 at August 07, 2011
Email ThisBlogThis!Share to TwitterShare to FacebookShare to Pinterest
Labels: Radiology