Transvaginal imaging can utilize higher probe frequencies because the area of interest, e.g. the ovary is much closer to the transducer – than with a trans abdominal probe.

Position is Supine for abdominal and lithotomy position for transvaginal scans.

To know the Expected date of delivery (EDD).

To findout twin pregnancy, rule out fetal anomaly at the earliest, placental localization.

If LMP is known, add 7 to days, subtract 3 from months). Naegele’s method 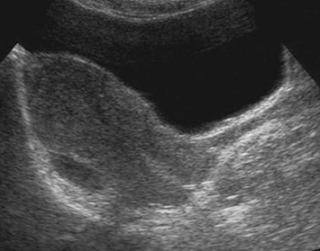 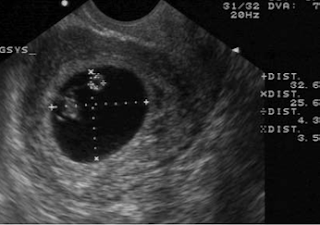 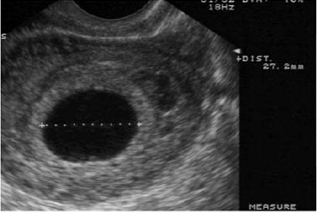 The early gestation sac appears as a circular transonic area surrounded by a thick bright ring. It usually lies at the uterine fundus and is eccentrically placed.
The ring and the eccentric position of the gestation sac and double decidual sign are important markers for confirming an intrauterine pregnancy.

Cardiac activity is seen at 5 weeks by TVS and 6 weeks by TAS.

After 9weeks to birth is fetus. 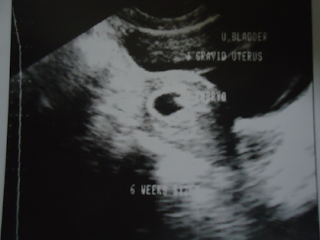 Measurements are taken from the top of the head (crown) to the end of the trunk (rump) using the onscreen calipers.

Used during the 1st trimester.

Once the fetal spine can be easily identified, i.e. from about 9 weeks, this should be used as a guide in assessing true fetal length.

With increasing gestational age, the fetus is more likely to be found in a flexed position. After 12 weeks this generally makes assessment of the gestational age by CRL inaccurate. 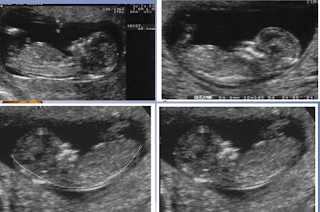 easy to see the twins in the first trimester

Apparently empty sacs in a multiple pregnancy might regress spontaneously before the embryo develops. This ‘vanishing twin’ phenomenon has been reported to affect up to 20% of multiple pregnancies.

Therefore the diagnosis of multiple pregnancies is delayed till appearance of live embryos.

Monochorionic monoamniotic twins have one amnion, one or two yolk sac and two embryos within one chorionic sac.

After 7 weeks, the presence of more than one embryo within a single gestation sac enables the conclusive diagnosis of a monozygotic monochorionic multiple pregnancy. 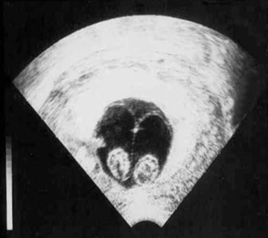 A case of twins at 8 weeks imaged transvaginally. Note the single chorionic cavity, which contains two amniotic cavities, confirming this is a case of monochorionic diamniotic twins 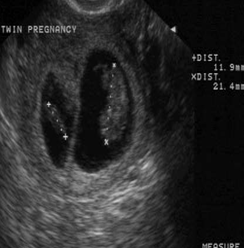 A dichorionic twin pregnancy demonstrating one sac containing a live fetus (CRL 21.4mm) and a dead twin (CRL 11.9mm) in the second sac.

Establishing Chorionicity and Amnionicity:
- Monochorionic Diamniotic twin show a characteristic T sign on ultrasound.
The presence of two separate sacs each with its own placenta is diagnostic of a dichorionic twin pregnancy.
The presence of an apparently single placenta can indicate either a dichorionic pregnancy with adjacent implantation of the two placentas or a monochorionic pregnancy with a single placenta. In such a situation chorionicity should be established. 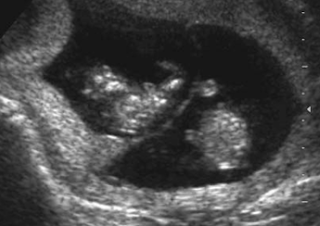 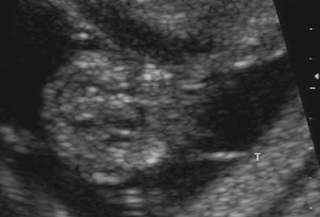 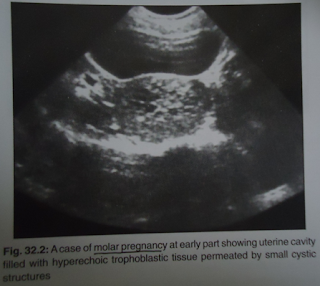 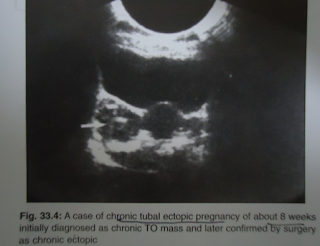 A second trimester ultrasound examination should be more than a means of confirming gestational age because it provides an ideal opportunity for assessing fetal anatomy and therefore structural normality .placental morphology, amniotic fluid volume is also noted.

most of the fetal anatomy can be evaluated at 18–20 weeks, it is frequently difficult to examine the fetal heart
In the majority of normal pregnancies, measurement of the biparietal diameter (BPD) and femur length (FL) provide the most accurate assessment of gestational age in the second trimester

The aims of usual second trimester scans are:

1. Determine the number of fetuses
2. longitudinal lie of the fetus
3. Measure the BPD, HC and TCD, evaluate the intracranial anatomy
4. four-chamber view of the fetal heart
5. the femur length.
6. Look for normal presence of long bones of upper and lower limbs.
7) Localization of placenta and evaluation of amniotic fluid volume.
8) Observe the fetal activity in terms of body and limb movements.

Using midline longitudinal section of the uterus.
Spine of the fetus is seen to locate the heart 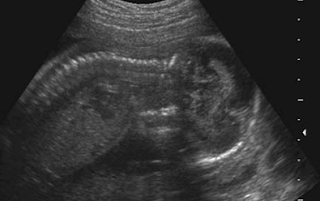 - A single optimal measurement of the BPD will predict the gestational age to within ± 5 days.

It is more precise than the optimum menstrual history to ascertain the EDD. 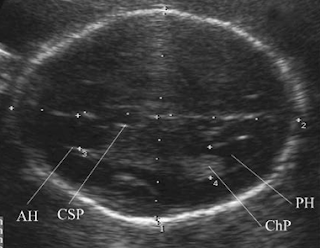 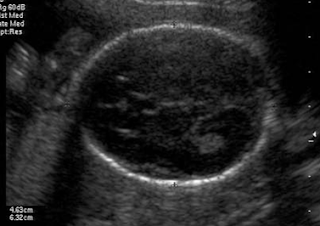 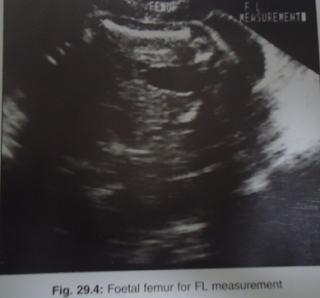 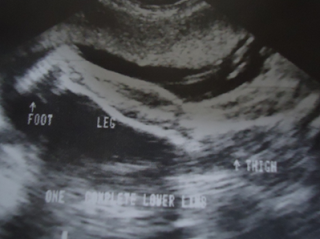 Placenta seen as a separate organ by ultrasound by 8th week
The placental site can change relative to the internal os.
The placenta is best identified longitudinally and has more echogenic pattern compared with that of the underlying myometrium.
Placenta may be anterior walled, posterior walled, fundic, or low lying.
Placenta previa may be marginal, partial, complete.Low lying palcenta is the one which remains 0.5-5cm away from internal os. Internal os is at max 6 cm from external os.(after28wk) 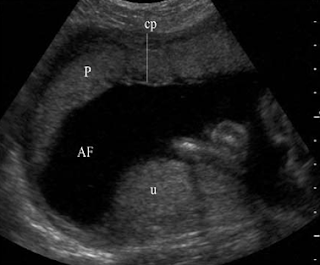 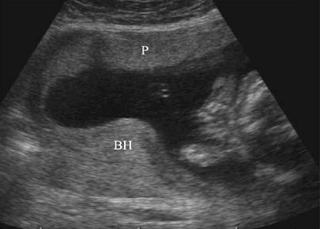 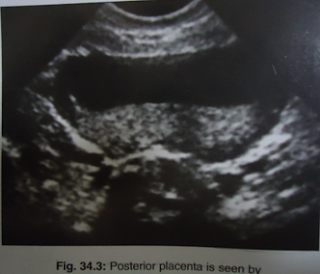 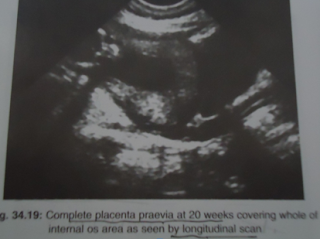 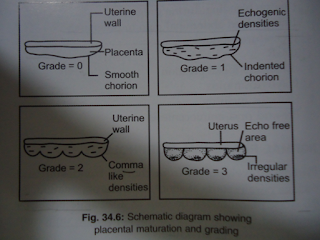 From early in the second trimester most of the amniotic fluid is fetal urine. Amniotic fluid is therefore produced by the fetal kidneys and removed by fetal swallowing and subsequent absorption by the fetal bowel.
The abdomen is divided into four quarters with the ultrasound probe held in the longitudinal axis, the largest vertical pool depth in each quadrant is recorded The sum of these measurements represents the amniotic fluid index (AFI). Although the AFI is known to vary with gestational age, an AFI < 5 cm is classified as oligohydramnios and an AFI > 25 cm is classified as polyhydramnios 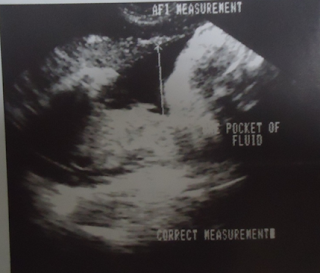 IUGR may be seen with less growth.easy method is to see if the estimated date is more than 3,2 or1 week different than the date seen at USG.

Can access maternal cervical competency to be good if cervix length>2cm and if int. os is <8mm,and if no fluid in endocervical canal 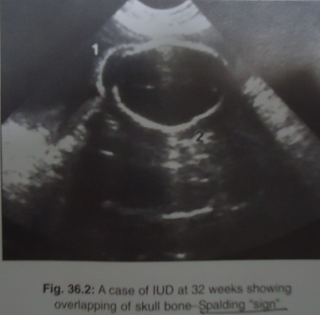 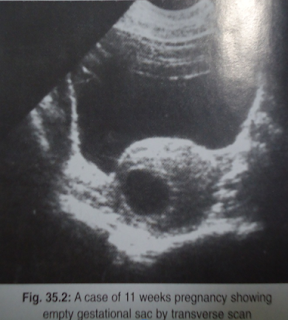 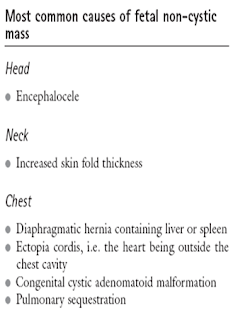 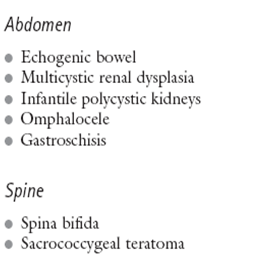 at August 04, 2011
Email ThisBlogThis!Share to TwitterShare to FacebookShare to Pinterest
Labels: Radiology