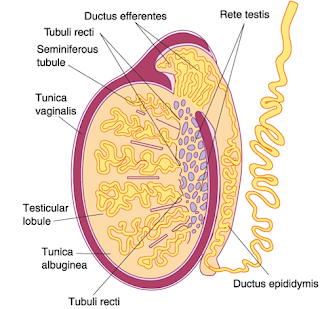 The seminiferous tubules are lined with a complex stratified epithelium called germinal or seminiferous epithelium. Their outer wall is surrounded by a well-defined basal lamina and a fibrous connective tissue consisting of several layers of fibroblasts The innermost layer, adhering to the basal lamina, consists of flattened myoid cells which have characteristics of smooth muscle. Interstitial (Leydig) cells occupy much of the space between the seminiferous tubules . 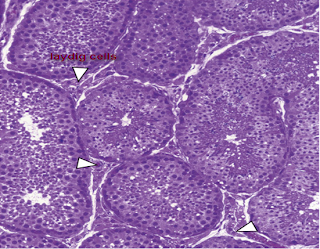 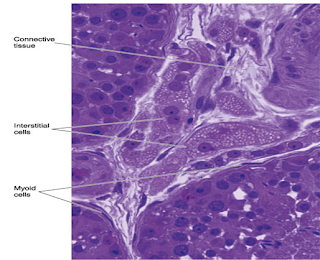 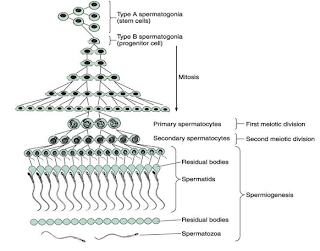 Spermatogenesis is the process by which spermatozoids are formed. It begins with a primitive germ cell, the spermatogonium (Gr. sperma + gone, generation), which is a relatively small cell, about 12 m in diameter, situated next to the basal lamina of the epithelium. At sexual maturity, spermatogonia begin dividing by mitosis, producing successive generations of cells.

From this first meiotic division arise smaller cells called secondary spermatocytes with only 23 chromosomes (22 + X or 22 + Y). This decrease in number (from 46 to 23) is accompanied by a reduction in the amount of DNA per cell (from 4N to 2N). Secondary spermatocytes are difficult to observe in sections of the testis because they are short-lived cells that remain in interphase very briefly and quickly enter into the second meiotic division.

Division of each secondary spermatocyte results in two cells that contain 23 chromosomes, the spermatids. Because no S phase (DNA synthesis) occurs between the first and second meiotic divisions of the spermatocytes, the amount of DNA per cell in this second division is reduced by half, forming haploid (1N) cells. The meiotic process therefore results in the formation of cells with a haploid number of chromosomes. With fertilization, the normal diploid number is again attained. 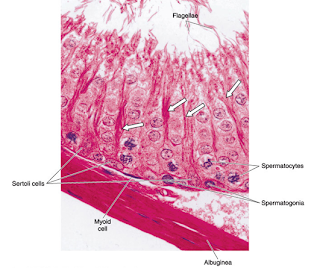 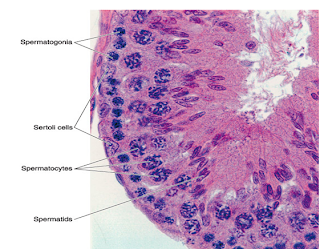 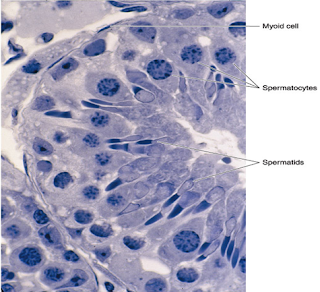 The cytoplasm of spermatids contains a prominent Golgi complex near the nucleus, mitochondria, a pair of centrioles, free ribosomes, and tubules of smooth endoplasmic reticulum .Small periodic acid chiff (PAS)-positive granules called proacrosomal granules accumulate in the Golgi complex. They subsequently coalesce to form a single acrosomal granule within a membrane-limited acrosomal vesicle .The centrioles migrate to a position near the cell surface and opposite the forming acrosome. The flagellar axoneme begins to form, and the centrioles migrate back toward the nucleus, spinning out the axonemal components as they move. 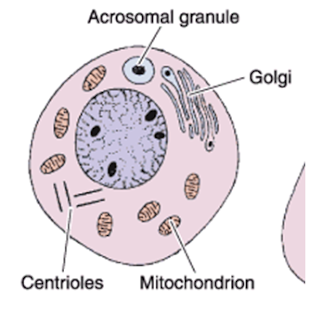 The acrosomal vesicle spreads to cover the anterior half of the condensing nucleus and is then known as the acrosome .The acrosome contains several hydrolytic enzymes, such as hyaluronidase, neuraminidase, acid phosphatase, and a protease that has trypsin-like activity. The acrosome thus serves as a specialized type of lysosome. These enzymes are known to dissociate cells of the corona radiata and to digest the zona pellucida, structures that surround the oocytes. When spermatozoa encounter an oocyte, the outer membrane of the acrosome fuses with the plasma membrane of a spermatozoon at several sites, liberating the acrosomal enzymes to the extracellular space. This process, the acrosomal reaction, is one of the first steps in fertilization. 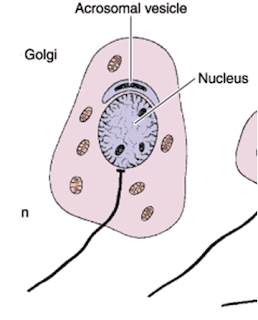 Residual cytoplasm is shed and phagocytosed by Sertoli cells, and the spermatozoa are released into the lumen of the tubule. 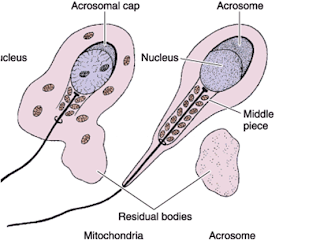 The Sertoli cells are important for the function of the testes. These cells are elongated pyramidal cells that partially envelop cells of the spermatogenic lineage. Sertoli cells have several functions:
1:Support, protection, and nutritional regulation of the developing spermatozoa,
2:Phagocytosis.
3:Secretion. Production of the anti-mullerian hormone. Anti- mullerian hormone (AMH, also called mullerian-inhibiting hormone),
4:The blood testis barrier.
5:Production of inhibin B, Inhibin B inhibits the production of FSH by the hypophysis.

The connective tissue consists of various cell types, including fibroblasts, undifferentiated connective cells, mast cells, and macrophages. During puberty, an additional cell type becomes apparent; it is either rounded or polygonal in shape and has a central nucleus and an eosinophilic cytoplasm rich in small lipid droplets .These are the interstitial, or Leydig, cells of the testis, and they have the characteristics of steroid-secreting cells. 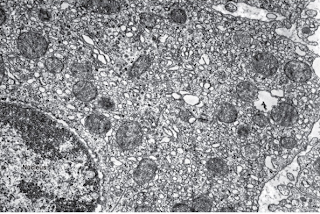 Electron micrograph of a section of an interstitial cell 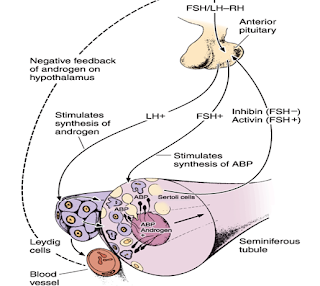 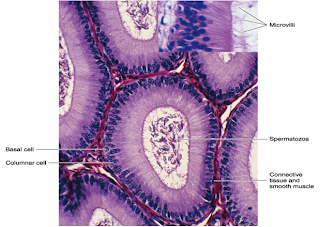 The highly coiled ductus epididymidis, sectioned several times. Its wall is made of a pseudostratified columnar epithelium surrounded by connective tissue and smooth muscle. PSH stain. Medium magnification. Inset: Higher magnification of the epithelial cells with their long microvilli (stereocilia).

at August 11, 2011
Email ThisBlogThis!Share to TwitterShare to FacebookShare to Pinterest
Labels: Histology