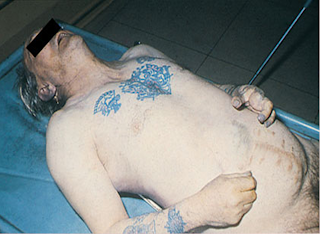 The determination of the individuality of a person based on physical characteristics.
Necessary in living person, recently dead, decomposed body, mutilated body and skeleton.
Necessary in criminal cases like physical assault, murder, rape etc. or in civil cases like marriage, passport, insurance claim, missing person.
At least two identification mark should be noted by the doctor in all ML cases.
The police has to establish the identity of the person. In some cases doctor may be able to supply identification marks of the person, dead body or fragmentary remains.

The corpus delicti: the body of offense, the fact of any criminal offense. The corpus delicti of murder is the fact that the person died from unlawful violence. Clothing with weapon mark, photographs of deceased showing injuries etc. are included in this term.
The main part of corpus delicti is establishment of identification of dead body.
It includes the body of the victim and other facts which are conclusive of dead by foul play, eg bullet or a broken knife found in the body.

Hindu males are not circumcised, sacred thread, cast mark on forehead, tuft of hair on the back of head
Hindu females: vermillion in head, silver toe ornaments, nose ring aperture in the left nostril
Muslim females: may have nose ring in septum only, several openings in the ear
Muslim males: circumcised

Can be determined from teeth, ossification of bones, secondary sex characters and general development in case of children.
Temporary and permanent teeth can be seperated. Temporary are smaller, lighter, china-white colored crown, smaller and more divergent roots.
Tooth eruption dates help identify the date
Gustafsons method is used for estimation of age of adults over 21 years. It is based on attrition (wear and tear of occlusal surface upto pulp), paradentosis (regression of gums and periodontal tissues in advancing age or pathology), cementum aposition (secondary cementum slowly and continuously deposited throughout life forming lines appearing as cross striation in the enamel of teeth and used to count to know the age), root resorption, transparency of the root. 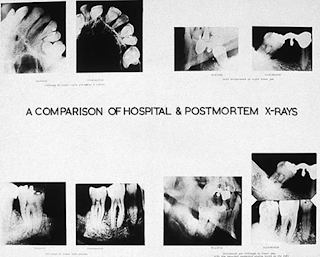 Varies at different time of day by 1 &half to 2 cm.
Malnutrition and old age reduces stature.
On an average body lengthens by 2cm after death.
If the body has dismembered, stature may be determined by length of tip of the middle finger to the tip of opposite middle finger, twice the length of one arm with 30cm added for 2clavicles and 4 cm for sternum