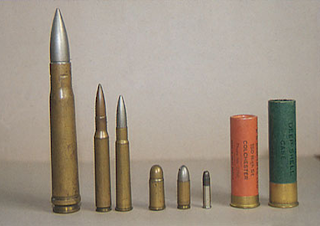 General make up of firearm:

Contains carbon 15%, sulphur 10%, potassium nitrate 75%
Only 44% of black powder is burnt into gas
The powder grains are black, coarse or fine, burns with production of much heat, flame and smoke
Fine grains travel 60-90 cm or more.

If a bullet hits bone, 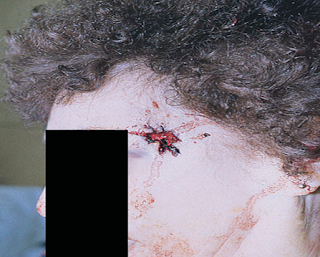 close discharge,
within a few cm of the surface, will also produce a wound with a similar appearance, but as there is now room for gas escape, there will be no muzzle mark.

More smoke soiling of wound can occur, and burning of skin with singeing and clubbing of melted hairs can be seen around the wound.
There is also, very commonly, powder ‘tattooing’ of the skin around the entry wound. This tattooing is due to burnt and burning flakes of propellant causing tiny burns on the skin and cannot be washed off.
Wads will commonly be found in the wound.

intermediate ranges,
between 20 cm and 1m, there will be diminishing smoke soiling and burning of the skin, but powder tattooing may persist.
The spread of shot will begin, first causing an irregular rim to the wound. Often called a ‘rat-hole’ in the USA because of the nibbled edges, the same appearance is called ‘scalloping’ in the UK.
Separate injuries caused by the wads or plastic shot containers may be seen.
At a range of over 1 m, smoke damage and tattooing do not occur.
With a normal shotgun, satellite pellet holes begin to be seen around the main central wound at a range of about 2–3 m.
.

long ranges,
as 20–50 m, there is uniform peppering of shot,rarely fatal. 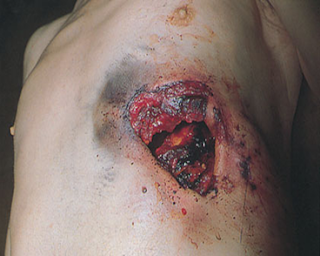 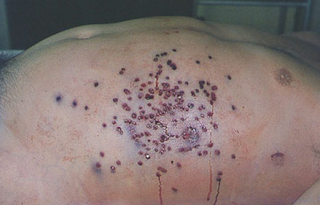 Close discharge of a 12-bore shotgun to the chest.
There is a large hole, partly due to disruption by gas, and no
evidence of pellet scatter is seen.

spread of the shot can be seen.

Wounds from rifled weapons in details based on distance

Bullets fired from rifled weapons will commonly cause both an entry and an exit wound.
However, exceptions to this rule are numerous and many bullets are retained within the body.

Contact wounds from a rifled weapon are generally circular, unless over a bony area such as the head, where splitting caused by the propellant gas is common.
close range up to about 20 cm, there will be some smoke soiling and powder burns, and skin and hair may be burnt, although this is very variable and depends upon both the gun and the ammunition used.

Over 1 m or so, there can be no smoke soiling, burning or powder tattooing.

At longer ranges (which may be up to several kilometres with a high-powered rifle), the entrance hole will have the same features of a round or oval defect with an abrasion collar. 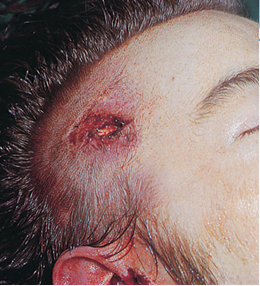 Suicidal pistol contact entry wound in the temple.
The skin is burnt and split due to the gases of the discharge. 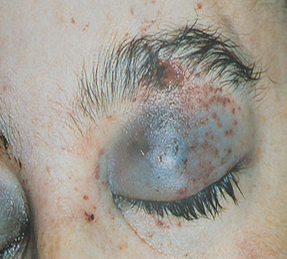 Pistol entry wound through the eyebrow with adjacent
powder tattooing. The bruising of the eyelid is due to the fractured
skull.
at August 24, 2011
Email ThisBlogThis!Share to TwitterShare to FacebookShare to Pinterest
Labels: Forensic Medicine