Bodies recovered from water may have: 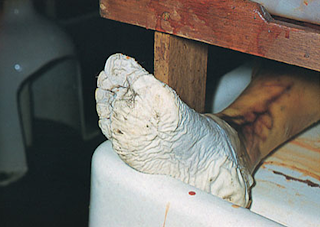 The mechanism of death in true drowning is not one of simple hypoxia but differ according to the type of water: hypotonic or hypertonic.
If a dead body is thrown into water, due to hydrostatic pressure, water passes into lungs. This hydrostatic lung will simulate drowning lung; but a fluidy lung with frothy fluid is diagnostic of drowning.
FRESH WATER DROWNING:
Fresh water is hypotonic compared to plasma, so, a rapid transfer of fluid takes place from the alveoli into the vascular system because of the osmotic difference between the water in the lungs and the plasma.
may increase the blood volume by as much as 50% within a minute and this hypervolaemia will place a great strain on the heart.
The lungs are ballooned but light in weight.
The rapid influx of water will render the plasma hypotonic, which will result in haemolysis of RBC.
It was once thought that severe hyperkalaemia caused from the haemolysed RBC contributed significantly to rapid myocardial failure, but more recent work has shown this to be only a relatively minor factor in death in fresh-water drowning.

SEA WATER DROWNING:
Seawater is hypertonic (3% NaCl), so that water is withdrawn by osmosis from the plasma into alveolar spaces in the lungs.
There is also electrolyte transfer, with mainly sodium and chloride passing from the hypertonic inhaled fluid into the blood.
The lack of hypervolaemia, with the consequent absence of strain on the heart, probably accounts for the longer survival times in salt-water submersion.

POST MORTEM FINDING:
Drowning is one of the most difficult modes of death to prove at post mortem.
Post mortem lividity is found on face, hands, upper part of chest, lower arms, feet and the calves.
Weed, grass, leaves etc. present in the water may be firmly grasped in the hands due to cadaveric spasm.
Classically, there will be a plume of froth at the mouth and nostrils, which may sometimes be tinged with blood.
This froth fills the air passages and exudes on to the face. It is composed of water containing plasma protein and surfactant that has been whipped into a froth by the violent terminal respiratory actions..
Externally this may be the only sign, but it is absent more often than it is present, especially when the body has been dead for some time.
The lungs may have a ‘doughy’ texture and remain inflated and spongy to the touch.
Dissection of the lung may show generalized pulmonary oedema, but where any water in the air spaces has been absorbed into the pulmonary circulation, the oedema will be absent – this is the so-called ‘dry-lung drowning’.
In a significant proportion of cases, the person dies quickly, sometimes within seconds of entering the water.
Sometime,The mode of death of these cases is considered to be cardiac arrest, which is most likely to be due to a vagal inhibitory reflex triggered by a sudden stimulation of sensitive areas like larynx, pharynx, skin of the heavily drunk alcoholics. 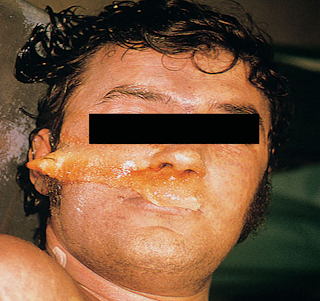 Profuse blood-tinged froth around the mouth and nose in drowning.

Microscopic algae, called diatoms, which are often, but not always, present in seawater and unpolluted natural fresh water.
All have an almost indestructible silicaceous capsule.
The theory behind the test is that normal people do not have significant numbers of diatoms in the kidneys, brain, marrow etc., but if a person drowns in diatom-containing water, the algae in that water will reach the lungs and some of them will penetrate the alveolar walls. If the heart is still beating, the diatoms that have entered the bloodstream will be transported around the body in the circulation and may lodge in distant organs such as the kidney, brain and bone marrow before death.
An increase in the number of diatoms in the internal organs was thought to confirm that the body had drowned and, if a sample of the water was also taken at the presumed site of drowning.

The similarity of different species of diatom in the water and the body could be compared.
On the other hand, if a dead body was dropped into water, although diatoms could reach the lung by passive percolation, no circulatory transfer could occur and so (theoretically) no diatoms would be present in the distant organs.
The advantages- could be used even in the presence of putrefaction, if protected tissue such as bone marrow was examined.
Unfortunately, the diatom test is often negative, even in undoubted cases of drowning in waterways full of diatoms, and there have been numerous false positive results.
All in all, this test is now so unreliable that it should only be used, and the results interpreted, with great circumspection. 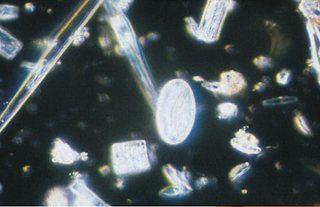