DEATH AND ITS CAUSES

Death is the cessation of life in a previously living organism
Medically and scientifically, death is not an event, it is a process. Historically death meant heart and respiration death but heart-lung bypass machine favored new concept ‘brain death’.
There are two aspects of death:
Clinical death
Cellular death

means the cessation of respiration (the utilization of oxygen) and the normal metabolic activity in the body tissues and cells.
Cessation of respiration is soon followed by autolysis and decay
Skin and bone will remain metabolically active and thus be ‘alive’ for many hours
The cortical neuron, on the other hand, will die after only 3–7 minutes of complete oxygen deprivation.

The complete and irreversible stoppage of circulation, respiration and brain function.
No legal definition of death.
A person who can not survive upon withdrawal of artificial maintenance is dead.
The individual is irreversibly unconscious and unaware of both the world and his own existence.
The question of death is important in resuscitation and organ transplantation.
Cornea can be removed from the dead body within 6 hours, skin 24 hours, bone 48 hours, kidney and heart obtained soon after circulation has stopped.

Brain death is of 3 types:

If the cortex alone is damaged, patient passes into coma but the brain stem will function to maintain spontaneous respiration.
Death may occur months or year later.
They are not in need of life sustaining treatment but require nutrition and hydration.
Has stable circulation and shows cycles of eye opening and closing but is unaware of the self and environment.

1.The patient must be in deep coma.
2.Treatable causes such as depressant drugs, metabolic or
endocrine disorders (diabetic or myxoedema coma)
or hypothermia must be excluded.
3. The patient must be on mechanical ventilation, no movement and no spontaneous breathing.
4. Cessation of spontaneous cardiac rhythm.
5. No brain stem reflexes- corneal, vestibulo-occular, pupillary, grimacing, gag reflex.
6. Bilateral fixed dilated pupil.

The format of certifying the cause of death is now defined by the World Health Organization (WHO) and is an international standard that is now used in most countries.

The system divides the cause of death into two parts:
Part I describes the condition(s) that led directly to death;
Part II is for other conditions, not related to those listed in Part I, that have also contributed to death. 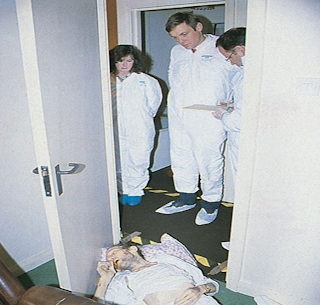 The pathologist, forensic medical examiner and senior police officer at the scene of a sudden death.
Mode of death:

According to Bichat, there are 3 modes of death based on death begins in which of the 3 systems: (irrespective of what the remote cause of death may be)

According to Gordon (1994), the stoppage of vital functions depend upon tissue anoxia. It may be anoxic anoxia (strangulation, choking, drowning, hanging), anaemic anoxia (acute massive hemorrhage, CO), stagnant anoxia (heart failure, shock) and histotoxic anoxia (acute cyanide poisoning).
Anoxic anoxia due to lack of oxygen in the inspired air or mechanical obstruction to respiration is k/a asphyxia. 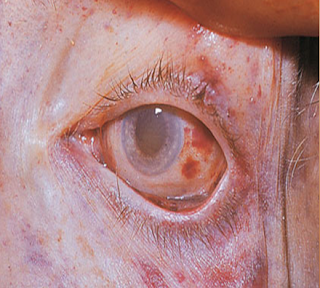 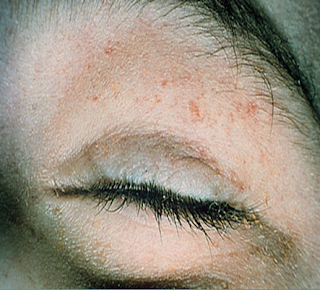 Petechial haemorrhages on the eyelid, conjunctiva in a case of manual strangulation.

Disease or injury responsible for starting the sequence of events, which are brief or prolonged and which produce death.

Way in which the cause of death was produced.
May be natural or unnatural, violent.
Violence may be of suicidal, homicidal, accidental or undetermined origin.

Mechanism of death:
Congestion is the red appearance of the skin of the face and head, due to the filling of the venous system
Oedema is the swelling of the tissues due to transudation of fluid from the veins caused by the increased venous pressure as a result of obstruction of venous return to the heart.
Cyanosis is the blue colour imparted to the skin by the presence of deoxygenated blood in the congested veins.
Petechial haemorrhages (petechiae) are tiny, pinpoint haemorrhages, most commonly seen in the skin of the head and face and especially in the lax tissues of the eyelids. They are also seen in the conjunctivae and sclera of the eye.

Physiological or biochemical disturbance produced by the cause of death which is incompatible with life eg. shock, sepsis, fibrillation, respiratory paralysis, severe metabolic alkalosis/acidosis.

NEGATIVE AUTOPSY:
When gross and microscopic examination, toxicological analysis and lab investigation fail to reveal the cause of death.
2-5% of all autopsies are neagtive.

SUDDEN DEATH:
When a person not known to have suffering from any dangerous disease, injury or poisoning is found dead, or dies within 24 hours after the onset of terminal illness (WHO)
Some authors call sudden death as occuring instantaneously or within 1 hour of onset of symptoms. Causes are disease of CVS-50%, resp. system-20%, CNS-15%, GI system- 7%, miscellaneous- 5 to 10% eg. DM.

at August 19, 2011
Email ThisBlogThis!Share to TwitterShare to FacebookShare to Pinterest
Labels: Forensic Medicine