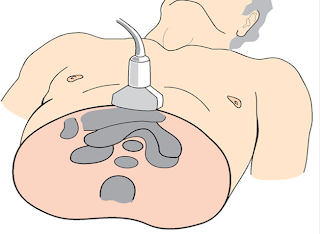 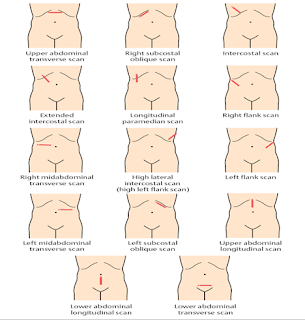 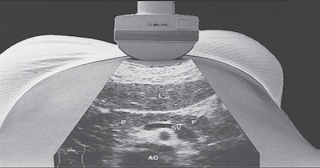 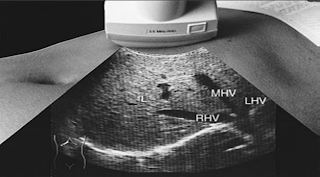 The probe is placed below the right costal arch and angled laterally upward. The beam is directed posterolaterally and superiorly.
The beam passes through the liver (L) and gives a longitudinal view of the hepatic veins, which open posteriorly into the vena cava. RHV = right hepatic vein, MHV = middle hepatic vein, LHV = left hepatic vein 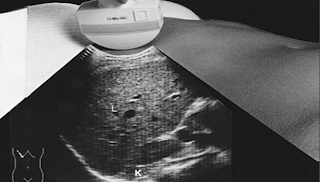 The intercostal scan is placed on an imaginary line between the right
shoulder and the umbilicus. From this point the beam can be swept across the liver (L) in a fan-shaped pattern. The kidney (K) is posterior 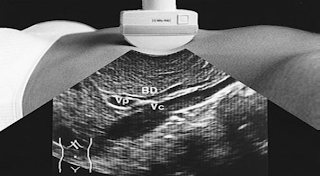 The probe can be slightly angled and rotated to demonstrate the bile duct (BD), vena cava (Vc), and portal vein (Vp) in approximate longitudinal sections. These structures are easier to define in left lateral decubitus at full inspiration 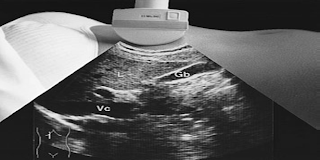 The probe is oriented longitudinally and is placed lateral to the midline
in an intercostal space or below the costal arch. The liver (L) is displayed in
longitudinal section, and the shape of the (normally acute) inferior hepatic angle can be evaluated. The fundus of the gallbladder (Gb) projects past the inferior border of the liver. The vena cava (Vc) is displayed in longitudinal section and is posterior to the liver. Vena cava filling can be evaluated in this plane 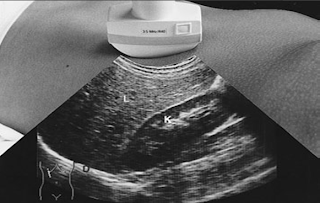 The flank scan is done by moving the probe laterally from the paramedian
position. It is used to evaluate the pleural angle distal to the diaphragm (D)
and displays a longitudinal section of the kidney (K) posterior to the liver (L) 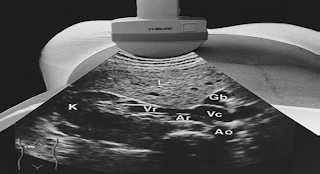 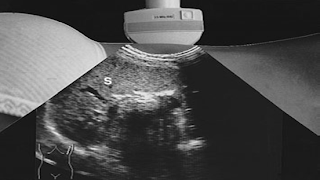 The probe is placed in an intercostal space cranial to the left flank to demonstrate the spleen (S) in longitudinal section. The upper pole of the spleen appears on the left side of the image. The probe is rotated, slid, and angled until the longest diameter is visualized. The length of the spleen and its thickness at the level of the splenic hilum are measured 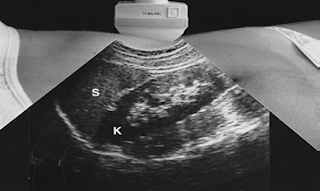 As the probe is moved caudal from the high flank scan, the kidney (K) appears in longitudinal section posterior to the spleen (S). The orientation of the kidney, its posteriorly placed upper pole, and its anteriorly directed lower pole can be clearly identified. 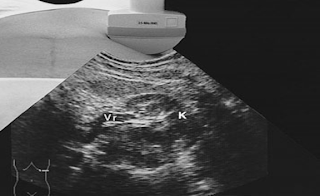 While still over the kidney, the probe is rotated to a transverse position
and is angled, rotated, and slid to a midabdominal transverse scan that displays the renal hilum with its vascular pedicle and may define the proximal ureter. The probe is then moved slowly down the kidney (K) from its upper to lower pole to survey the organ in transverse sections. Vr = renal vein 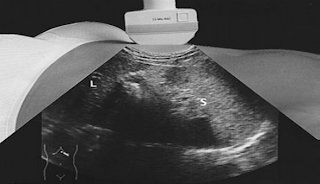 From the midabdominal transverse scan, the probe is slid to a position
below the left costal arch to obtain a left subcostal oblique scan. The liver (L) is visible on the left side of the image. The spleen (S) appears posterolaterally on the right side of the image, displaying its true width and a foreshortened longitudinal diameter 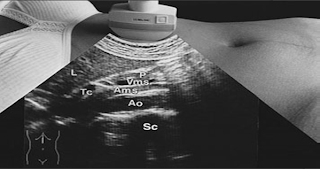 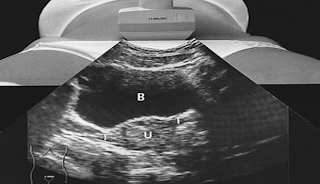 The following structures are defined from anterior to posterior: abdominal
wall, bladder (B), and uterus (U), which is flanked by the fallopian tubes (T) 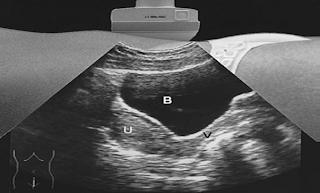 From anterior to posterior: abdominal wall, bladder (B), and uterus
(U), which is bounded by the fundus above and the vagina (V) below

at August 09, 2011
Email ThisBlogThis!Share to TwitterShare to FacebookShare to Pinterest
Labels: Radiology