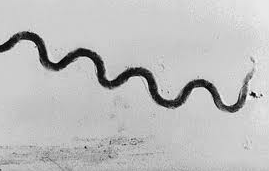 Syphilis is primary a sexually transmitted disease caused by the Spirochete T.Pallidum. Starting with a small lesion (chancre), several progressive stages of the disease can span a period of thirty years or more, often ending in syphilitic dementia or cardiovascular damge.The cauative organism of syphilis is extremely fastidious and fragile. it cannot be cultured routinely in the laboratory, and is sensitive to disinfectants, heat, and drying. T.pallidum is so thin that it cannot be observed by conventional light microscopy, but requires immunofluorescent or dark- field techniques. The outer surface of the spirochete is sparse in proteins, and the organism is only wakly antigenic. T.pallidum appears to produce neither endotoxins nor exotoxins, although it does secrete hyaluronidase, an enzyme that disrupts ground substance, and probably facilitates dessemination of the organism.

Transmission of T.pallidum is almost by sexual contact or transplacentally (congenital syphilis). This is understandable because the organism is so sensitive to environmental factors that survival outside of the host for more than a few minutes is highly unlikely. The organsim enters the body through break in skin, or by penetrating mucous membranes, such as those of the genitalia.

Symptoms of primary stage syphilis is a hard genital or oral ulcer(chancre) that develops at the site of inoculation. The average period between infection and the appearance of the chancre is about three weeks, but varies with the number of infecting organisms. This primary lesion heals spontaneously, but the organism continues to spread throughout the body via the lymph and blood.

An asymptomatic period ensues, lasting as long as 24 weeks, followed by the secondary stage. This stage is characterized by the appearance of a red,maculopapular rash on almost any part of the body, including the palms of the hands and soles of the feet.
Also present are pale, moist, flat papules seen primarily in the armpits and mouth.Both Primary and secondary lesions teem with T.pallidum and are extremely infectious.
The Secondary stage may be accompanied by systemic involvement, causing
Hepatitis,Meningitis,Nephritis or Chorioretinitis. Upon healing of the secondary lesions, the disease enters a latent period that can last for many years.

In approximately forty percent of infected individuals, the disease progresses to a tertiary stage, characterized by degeneration of the nervous system, cardiovascular lesions such as aneurysms, and granulomatous lesions (gummas) in the liver, skin and bones.

Note: The chancre represents an initial local infection, but syphilis quickly becomes a systemic disease with widespread dissemination of the spirochete.

T.pallidum can be transmitted through the placenta to a fetus after the first ten to fifteen weeks of pregnancy. Infection can cause death and spontaneous abortion of the fetus or cause it to be stillborn. Infected infants who live develop a condition similar to secondary syphilis, including a variety of cental nervous system (CNS) and structural abnormalities. Treatment of the pregnant mother with appropriate antibiotics prevents congenital syphilis.

One single treatment with penicillin is curative for primary and secondary syphilis; no antibiotics resistance has been reported. In cases of patient sensitivity to penicillin, alternate therapy with erythromycin or tetracyclines may also be effective. In spite of an inexpensive and highly effective cure, there are still over 8000 new cases of syphilis in the United States each year. There is no vaccine against T.pallidum; prevention depends on safe sexual practices.
More than one sexually transmitted diseasae (STD) can be passed on at the same time. Therefore, when any STD has been diagnosed, the possibility of the infected individual also having syphilis should be considered.
at July 27, 2011
Email ThisBlogThis!Share to TwitterShare to FacebookShare to Pinterest
Labels: Microbiology