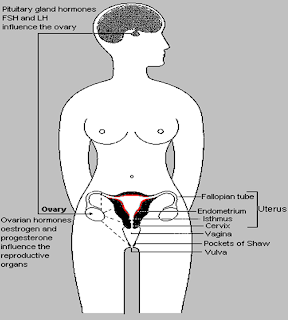 The physiological phenomenon in which the unused endometrium is shed and voided from the body as the menses or period or menstrual flow.
This term was derived in the context of human females who happen to cycle in about the same length of time as a lunar month, it is also applied to other species whose cycles are not one month long.

The average menstrual cycle in humans ranges about 20 to 40 days in length, with a statistical average of about 28 to 29 days.

By convention, the first day of a woman’s period is considered to be day 1 of her cycle.

The first 3 to 7 days are generally the menstrual flow phase and during this time, all hormones involved are at low levels. 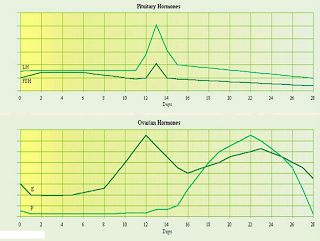 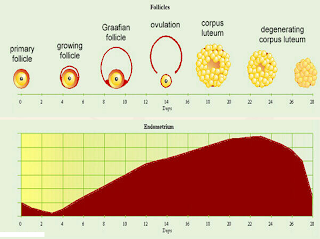 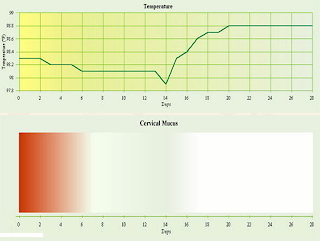 The first half of a woman’s cycle is the proliferative phase (follicular phase), during which the endometrium starts to thicken.

The pituitary secretes FSH which causes (usually one) follicle to mature and the ovaries to secrete estrogen.
The ovarian estrogen secretion gradually increases until just prior to ovulation.
This gradually supresses secretion of FSH and stimulates the hypothalamus to secrete a larger amount of GnRH which, in turn, triggers the pituitary to secrete a burst of LH, causing ovulation.

During the proliferative phase, a woman’s body temperature is low.

Sometimes there is a slight rise near the end of the phase during the pre-ovulatory burst of LH before it dips again at ovulation.

Throughout this phase, the cervical mucus becomes progressively clearer and thinner

at May 07, 2011
Email ThisBlogThis!Share to TwitterShare to FacebookShare to Pinterest
Labels: Physiology