This consists of the lungs and the air passages that lead to and form the lungs.

The air passages branch as they enter the lungs to finally form alveoli.

This system has 3 main functions:

Also air passing through the larynx gives rise to speech and air passing over the olfactory mucosa leads to our sense of smell. 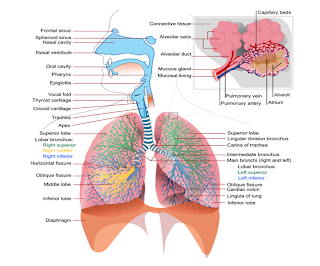 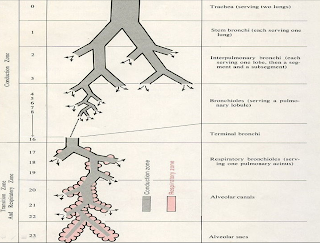 Air passages consist of a conducting portion and a respiratory portion.

The conducting portion is the air passages that lead to the sites of respiration so gas exchange can occur.

Bronchi within the lungs branch extensively to form bronchioles, which are the terminal part of the conducting system.

The respiratory portion is the part of the tract where gas exchange takes place and includes:
Respiratory bronchioles;
Alveolar ducts;
Alveolar sacs;
Alveoli.

Capillaries within the lungs come into intimate contact with the alveoli and are the structural basis of gas exchange in the lung.

Conditioning of the air before it reaches the respiratory portion occurs and consists of warming, moistening, and removal of particulate material. 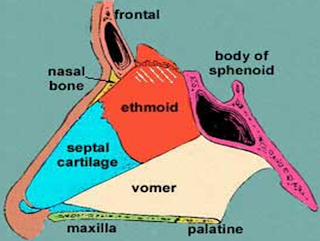 Dilated part immediately inside the
anterior nasal opening. It is lined by
skin and has hairs projecting downwards called vibrissae

Lower 2/3 of nasal cavity
Thick mucous membrane due to presence of cavernous vascular tissue
its function is to warm, moisten, and clean the inspired air 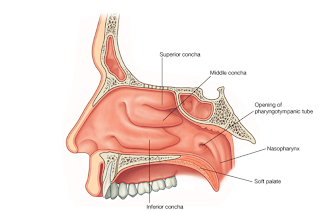 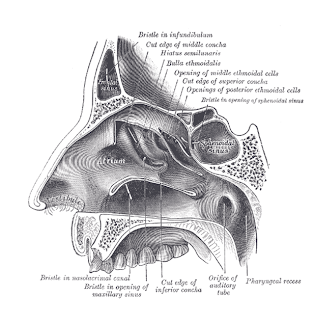 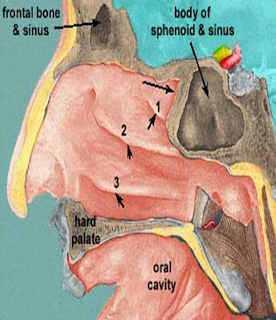 Hiatus semilunaris-Curved cleft below
The bulla 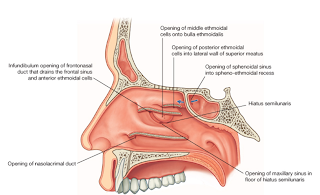 Naso lacrimal duct- opening in the anterior part of meatus 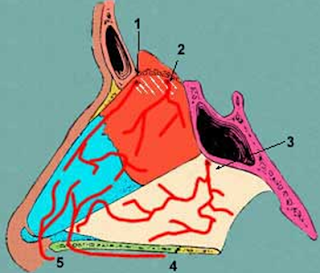 at April 18, 2011
Email ThisBlogThis!Share to TwitterShare to FacebookShare to Pinterest
Labels: Anatomy