Migraine and its types 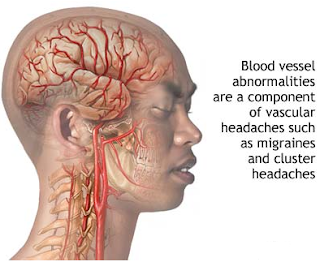 it has been estimated that 18 million women and 6 million men in the United states suffer from sever Migraine headaches.

Migraine can usually be distinguished clinically from the two other common types of headaches :

Migraine: present as a pulsatile,throbbing pain

a. Cluster headaches : as excruciating,sharp and steady pain.

b. Tension-type headaches: as dull pain,with a persistent,tightening feeling in the head.

Patients with severe migraine headaches report one to five attacks per month of moderate to severe pain, usually unilateral. The headaches affect patient for a major part of their lives and result in considerable health losts.

There are two main types of migraine headaches.

Approximately 85 percent of patients with migraine do not have aura.

In the Second type, Migraine with aura (previously called classic migraine),
the headache is preceded by neurologic symptoms called auras,which can be visual,sensory,and/or cause speech or motor disturbances.Most commonly,these prodromal symptoms are visual, occuring approximately 20 to 40 minutes before headache pain begins. In the 15 percent of Migraine patients whose headaches is preceded by an aura, the aura itself allows similar.

For both types of Migraine, women are three-fold more likely than men to experience either type of Migraine.

The first manifestation of migraine with aura is a spreading depression of neuronal activity accompanied by reduced blood flow in the most posterior part of the cerebral hemisphere. This hypoperfusion gradually spreads forward over the surface of the cortex to other contiguous areas of the brain. The vascular alteration is accompanied by functional changes; for example, the hypoperfused regions show an abnormal response to changes in arterial partial pressure of CO2. The hypoperfusion persists throughout the aura and well into the headache phase, after which hyperperfusion occurs. Patients who have Migraine without aura do not show hypoperfusion. However the pain of both types of Migraine may be due to Extracranial and Intracranial arterial dilation. This stretching leads to release of neuroactive molecules, such as Substance P.
at April 04, 2011
Email ThisBlogThis!Share to TwitterShare to FacebookShare to Pinterest
Labels: Pathology