Symmetrical
In the trunk of the body consist of parietal and visceral branches
Shortest possible course
Run on flexor surfaces
Usually do not pass directly through muscles, avoiding compression
Together with the veins and nerves in a sheath of fascia to form neurovascular bundle

Pulmonary trunk Arises from right ventricle
Runs up, back ,and to the left
Bifurcates inferior to aortic arch into right and left pulmonary arteries, one for each lung 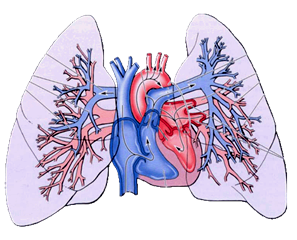 is a shunt connecting the pulmonary artery to the aortic arch. It allows most of the blood from the right ventricle to bypass the fetus' fluid-filled lungs
The DA begins to close when breathing is established, and is completely sealed after four to ten days to become the ligamentum arteriosum 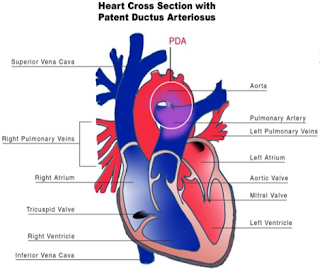 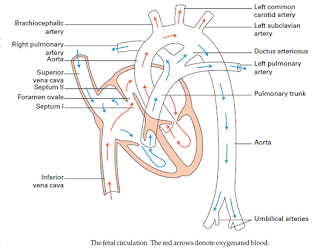 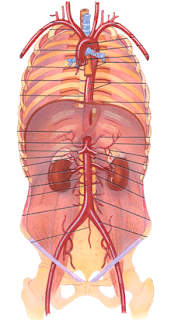 The aorta is usually divided into 3 sections:

Ascending aorta—the section between the heart and the arch of aorta . The only branches of the ascending aorta are the right and left coronary arteries that supply the heart.

Arch of aorta— ending on the left side at level of vertebral T4/5. From right to left side at its convexity the aortic arch give off three branches for the head and upper limbs, namely the brachiocephalic trunk, left common carotid artery and the left subclavian artery.

Thoracic aorta—the half of the descending aorta above the diaphram. this part of the aorta sends numerous branches to serve the thoracic wall and organs.

Abdominal aorta—the half of the descending aorta below the diaphram. It sends many branches to the abdominal wall and organs. And finally, it bifurcates into the right and left common iliac arteries in front of the L4 for the pelvis and lower limbs.

1.Arteries of the neck and head 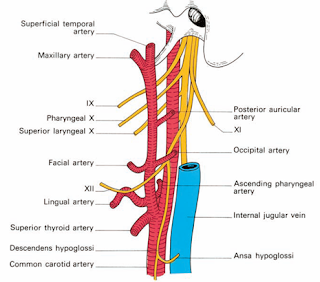 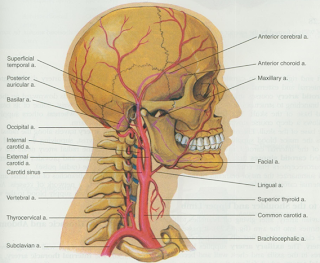 1)External carotid arteries supply most tissues in the face and in the anterior area of the neck.

Superior thyroid a. － to supply upper pole of thyroid gland and larynx

Lingual a. － to supply the tongue

Occipital a. -- to the back of the scalp

Posterior auricular a. － supplies the skin of the back of the ear

Maxillary a. － supplies the upper and lower jaws, nasal cavity and the muscles of mastication

Superficial temporal a. － to supply the most part of the scalp

Ascend and pass through the carotid canal to the skull.
They send branches to supply the brain and the eyes.
The arteries have no branches in the neck.

Vertebral a. passes through the foramen magnum to the skull and supply the brain and the spinal cord .
Internal thoracic a.
Thyrocervical trunk
Inferior thyroid artery －supplies inferior pole of thyroid gland
Costocervical trunk 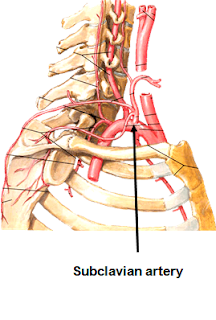 Arteries of the upper limb

1)The axillary artery
It is the continuation of the subclavian arteries at the lateral border of the first rib ,serves the large part of the upper limb, and ends at the lower border of teres major.

2)Brachial artery
The brachial artery is continuation of the axillary artery, it descends along the medial side of the humerus,divides into the radial and ulnar arteries at the level of the neck of radius. 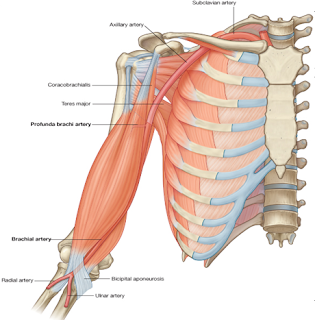 descends along the medial margin of the brachioradialis to the level of styloid of the radius.
it lies just lateral to the tendon of the flexor carpi radialis in diatal forarm and is easy to palpate
A superficial palmar branch enters the hand and anastomoses with the superficial palmar arch formed by the ulnar artery. 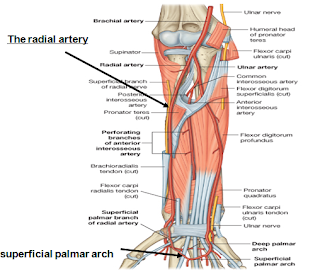 In the palm, the branches of the radial and the ulnar arteries anastomose each other to form the two arches.
The superficial palmar arch is formed by the anastomosis of the terminal part of the ulnar artery and the superficial palmar branch of the radial artery.
It gives off three common palmar digital arteries that finally split into two proper palmar digital arteries to supply the fingers. 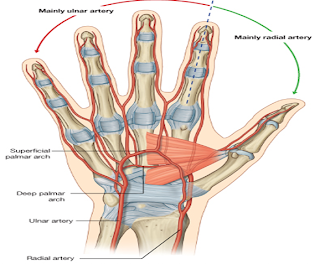 is formed by the anastomosis of the terminal part of the radial artery and the deep palmar branch of the ulnar artery.
The main branches of the arch include the principal thumb artery that supplies mainly the thumb and three palmar metacarpal
arteries that join to the three common palmar digital arteries. 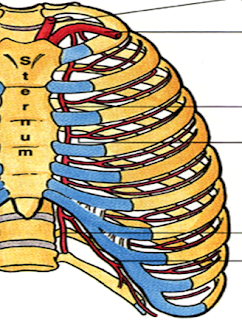 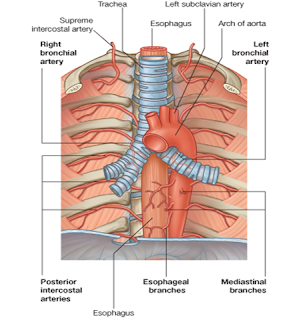 The abdominal aorta is the main source of blood supply of the abdomen. 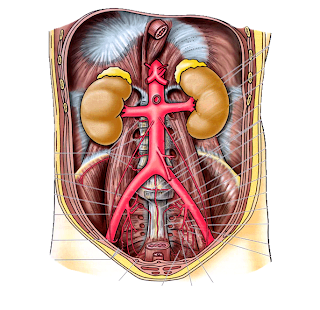 The unpaired visceral branches include the celiac trunk, and the superior and inferior mesenteric arteries

It divides almost immediately into the left gastric, splenic and the common hepatic arteries.
These branches supply the alimantary canals from the stomach to the decending part of duodenem proximal to the great duodenal papilla.
They also supply the liver ,pancrease, gall bladder and spleen. 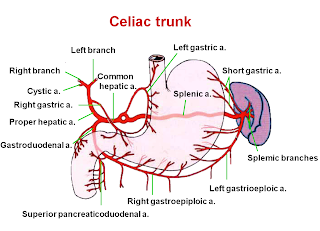 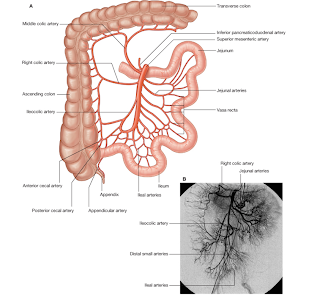 arises from the front of the aorta at the level of L3
it gives off the left colic artery, sigmoid arteries, and superior rectal arteries.
These branches supply the the last part of the transverse colon, descending colon, sigmoid colon and the upper part of the rectum。 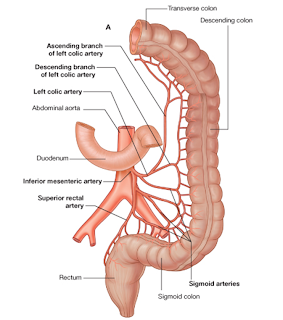 Arteries of pelvis and lower limb

Both of them are the branches of the common iliac arteries

The two common iliac arteries start at L4 from the end of aorta and splits into the internal and external iliac arteries in front of the sacroiliac joint. 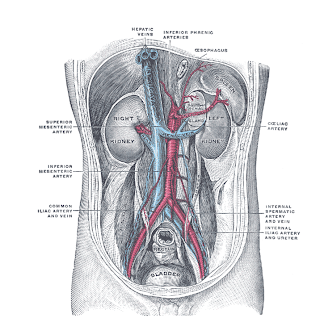 Supplied by the internal iliac arteries

Main branches include:
parietal branches
a)Superior and inferior gluteal arteries -- supply the gluteal muscles
b) Obturator artery-- descends through the obturator foramen to the thigh to supply the adductor muscles 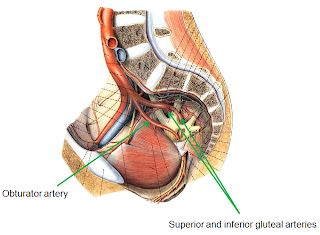 2) Visceral branches
a) Internal pudendal artery-- supply the anus, perineal muscles and external genitalia
b) Inferior rectal artery to the lower part of the rectum
c) Uterine artery supplies the uterus and vagina.

Supplied by the extenal iliac arteries 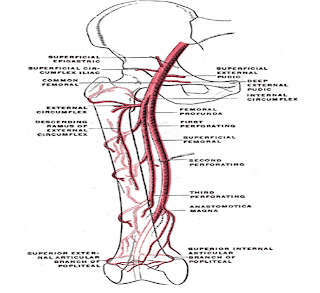 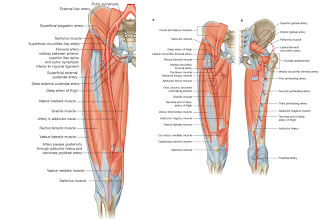 It is the continuation of the femoral artery, and descends through the popliteal fossa .
It gives off several branches to the knee joint and nearby muscles.
Just below the lower border of the popliteus, the popliteal artery splits into the anterior and
posteror tibial arteries.

is the continuation of the popliteal artery and descends downwards , branches to supply the flexor muscles of the leg.
Inferiorly, it passes behind the medial malleolus of the tibia and enters the planta. There it divides into the medial and lateral plantar arteries to serve the sole and the toes.
Another branch is the peroneal artery supplying the lateral group muscles of leg and giving a nutrient branch to the fibula. 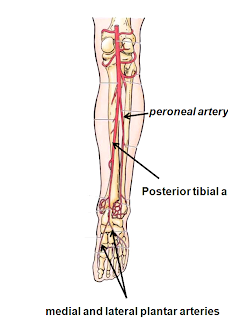 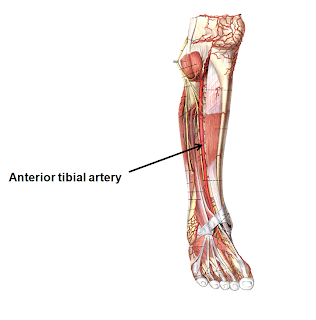 at April 16, 2011
Email ThisBlogThis!Share to TwitterShare to FacebookShare to Pinterest
Labels: Anatomy