Anatomy of the Brain Stem 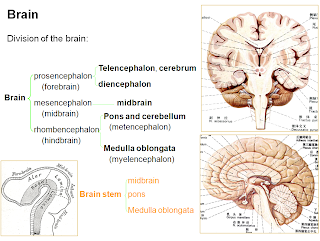 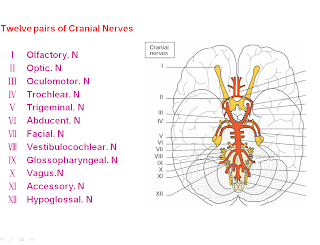 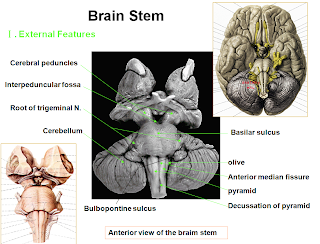 The anterior surface of medulla oblongata is grooved by an anteromedian fissure,on either side of which are the swellings due to the pyramidal tracts. These
pyramids, in turn, are separated from the olivary eminences by the anterolateral sulcus along which the rootlets of the 12th cranial nerve emerge.
Between the olive and the inferior cerebellar peduncle there is yet another groove corresponding to the posterolateral sulcus of the spinal cord; emerging from this groove are the rootlets of cranial nerves IX, X and XI

The pons lies between the medulla and the midbrain and is connected to the cerebellum by the middle cerebellar peduncles.
Its ventral surface presents a shallow median groove and numerous transverse ridges, which are continuous laterally with the middle cerebellar peduncle.
Its junction with the medulla is marked close to the ventral midline by the emergence of the 6th
7th and 8th cranial nerves nerves.
5th cranial nerves leave the lateral part of the pons near its upper border.

The anterior surface of the midbrain is formed by the cerebral peduncles (descending cerebral pathways).

The fibres of the 3rd nerves emerge between the two cerebral peduncles in the interpeduncular fossa. 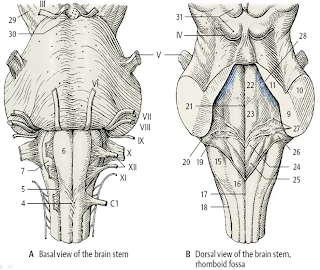 The posteromedian sulcus of the spinal cord is continued half-way up the medulla, where it widens out to form the posterior part of the 4th ventricle.
On either side of the fissure the posterior columns of the spinal cord expand to form two distinct tubercles, the gracile and cuneate nuclei
The dorsal surface of the pons forms the upper part of the floor of the 4th ventricle
The dorsal surface of the midbrain presents corpora quadrigeminia,including two inferior,and two superior colliculi .
The corpora quadrigemina are reflex centers involving vision and hearing 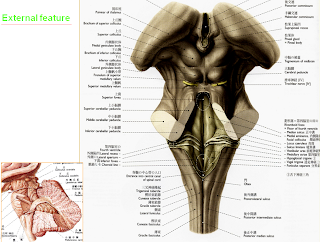 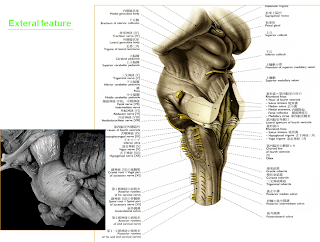 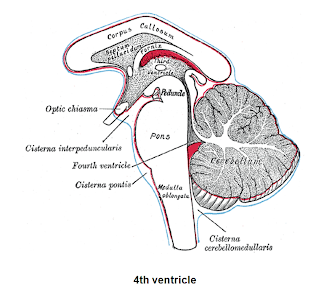 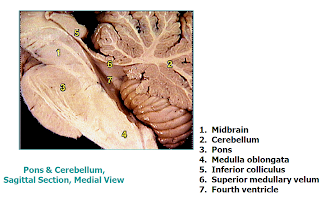 Cranial nerve nuclei are referred to those nuclei located in the brain stem, where the cranial nerves originate or terminate except the olfactory and optic nerve

Descending pathways originate in the same motor area of the cortex, but terminate in 1) spinal cord and 2) brain stem 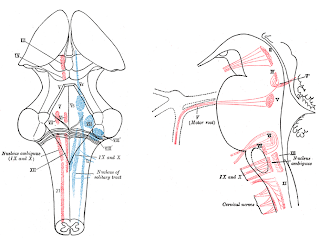 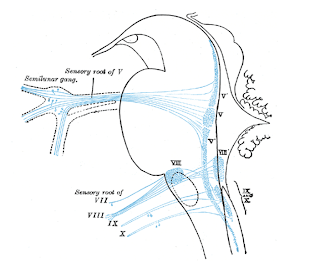 Passing fibrous bundles which originate in the spinal cord:

1) Medial lemniscus: fibrous bundle formed by relayed fibers from fasciculi gracilis,
cuneatus. The fibers relay in gracile and cuneate nuclei, and decussate with fibers of opposite side, finally end in the ventral posteriomedial nucleus of thalamus

2) Spinothalamic lemniscus： composed of anterior and posterior spinothalamic tracts, and terminate in the ventral posterolateral nucleus of thalamus 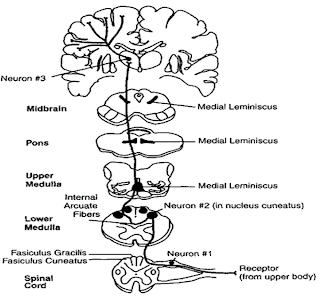 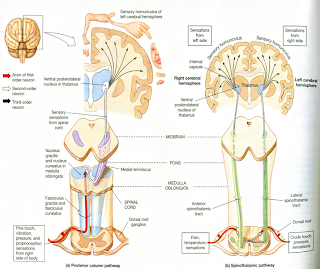 1) Trigeminal lemniscus: formed by fibers from contralateral spinal and pontine nuclei of trigeminal n. It conducts the tactile, pressure, pain and thermal impulses to the ventral posterolateral nucleus of thalamus

2) Lateral lemniscus: formed by the fibers from the ipsilateral and controlateral cochlear nuclei; some of fibers end in the inferior colliculus, others traverse the brachium of inferior colliculus to the nucleus of medial geniculate body 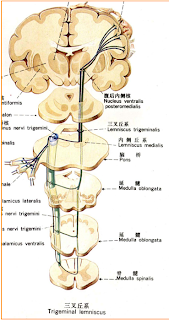 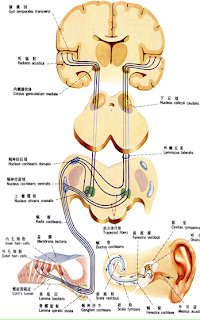 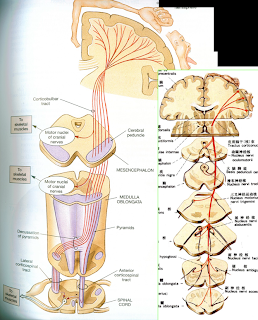 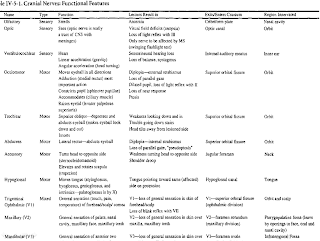 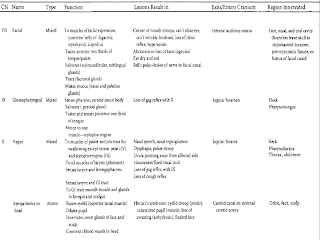 The cerebellum is the integrative organ for the coordination and fine-tuning of movement and for the regulation of muscle tone.
it is situated in the post cr fossa behind the pons & medulla.

The cerebellum consists of two cerebellar hemispheres that are united to each other by the median vermis.

The sup surface is convex. The two hemispheres are continued each other on this surface. 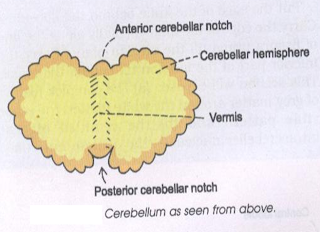 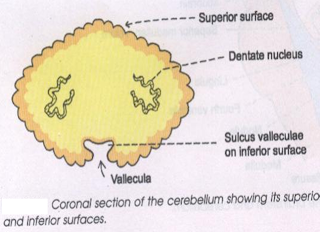 It consists of a cortex of grey matter (in which all the afferent fibres terminate) covering a mass of white matter, in which deep nuclei of grey matter are buried.
The cerebellar cortex contains several maps of the skeletal muscles in the body
The topographic arrangement of these maps indicates that the vermis controls the axial and proximal musculature of the limbs, the intermediate part of the hemisphere controls distal musculature, and the lateral part of the hemisphere is involved in motor planning. 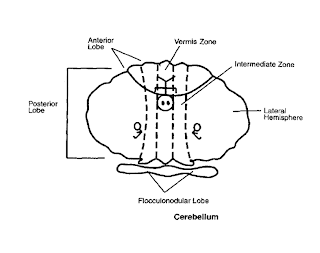 The diencephalon is a midline structure
which is largely embedded in the cerebrum, and therefore hidden from the surface view.

Its cavity is the 3rd ventricle the hypothalamic sulcus extending from the interventricular foramen to the cerebral aqueduct, divides each half of the diencephalon in to dorsal & ventral parts.
Further sub divisions are follows 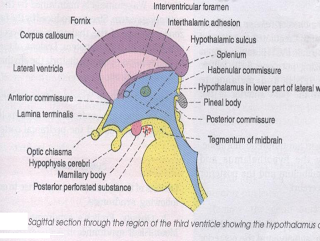 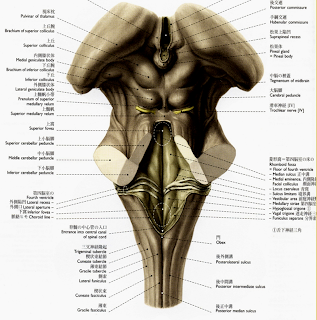 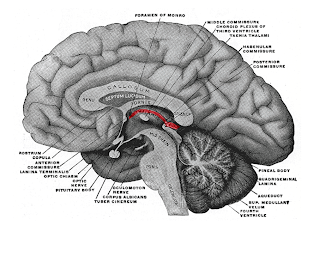 The thalamus serves as the major sensory
relay for the ascending tactile, visual,auditory,
and gustatory information that ultimately reaches
the cerebrum cortex.

The hypothalamus is composed of numerous
nuclei that have afferent and efferent connections
with widespread regions of the nervous system,
including the pituitary gland, the autonomic
system, and the limbic system .It takes part in the
control of many visceral & metabolic activities

META THALAMUS
It consists of medial & lateral geniculate bodies
Which are situated on either side of the midbrain, below the thalamus

It is an oval elevation situated just below the pulvinar of the thalamus & lat to the sup colliculus
It represents the thalamic relay between the inferior colliculus (IC) and the auditory cortex (AC).

This is a small elevation situated anterolateral to the med geniculate body, below the thalamus.
It is the primary processing center for visual information received from the retina of the eye 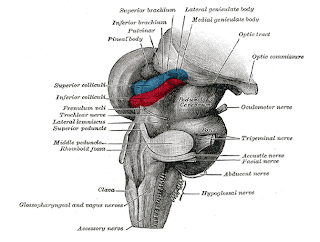 at April 12, 2011
Email ThisBlogThis!Share to TwitterShare to FacebookShare to Pinterest
Labels: Anatomy