Definition:
Apoptosis is the programmed cell death in which there is carefully coordinated collapse of cell, protein degradation , DNA fragmentation.

Here the cell destined to die activate enzymes that degrade the cells own nuclear DNA and nuclear and cytoplasmic proteins.

Physiologic causes:
1)The programmed destruction of cell during embryogenesis. It is programmed because ---- it is death of specific cell types at defined times during development.

2)Hormone-dependent physiologic involution, such as involution of the endometrium during the menstrual cycle.
3)Cell deletion in proliferating cell population, such as intestinal crypt epithelium

4) Death of cells that have served there useful purpose, such as neutrophils in an acute inflammatory respone.
5) Elimination of potentially harmful self reactive lymphocytes.

2) Cell injury in certain viral diseases such as viral hepatitis. 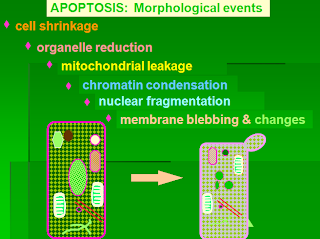 Apoptosis usually involves single cells or clusters of cells that appear on H & E-stained sections as round or oval masses with intensely eosinophilic cytoplasm.

1)Cell Shrinkage : cell is smaller in size, with dense cytoplasm and the organelles are tightly packed.

2)Chromatin condensation: Most characteristic feature of apoptosis. The chromatin aggreagates peripherally, under the nuclear membrane into dense masses of various shape and sizes.

3) Formation of cytoplasmic blebs : As the cell rapidly shrinks some part of cytoplasm with intact cell membrane will bleb out of the cell forming membrane blebs.

4) Apoptotic bodies :Ultimately, karyorrhexis occurs, this is reflected in fragmentation of DNA into nucleosome-sized pieces, presumably through the activation of endonucleases . The cells rapidly shrink, form cytoplasmic buds, and fragment into apoptotic bodies composed of membrane-bound vesicles of cytosol and organelles .

5) Phagocytosis of apototic cell bodies, by macrophages : these fragments or apoptotic bodies are quickly extruded and phagocytosed or degraded by lysosomes. 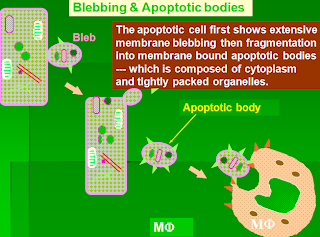 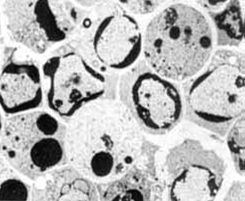 Ultrastructural
features of apoptosis.
Some nuclear fragments
show peripheral
crescents of compacted
chromatin,
whereas others are
uniformly dense.

1) Because the cell shrinkage and formation of apoptotic bodies are rapid and the fragments are quickly phagocytosed.
2) Apoptosis doesnot elicit inflammatory response. 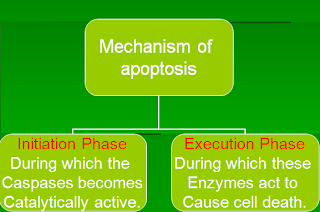 Caspases are members of family of cysteine proteases, and are involved in protein hydrolysis which is the specific feature of apoptosis. 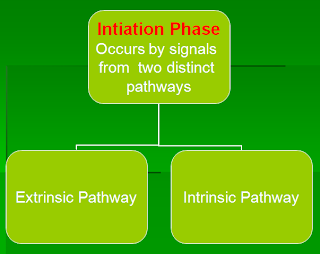 Fas, which is a death receptor is present on the cell surface. This Fas is then cross linked with its ligand.

3 or more Fas molecules come together

This complex will then bind to inactive form of caspase 8 i.e procaspase 8

Multiple procaspase will be activated by cleaving on another ,to form active caspase 8 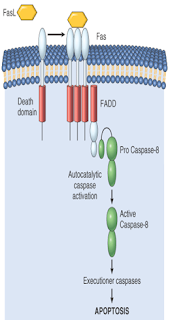 Inhibition of Extrinsic pathway of apoptosis:

Inhibited by a protein called FLIP, which bind to procaspases 8 and inhibit there cleavage. 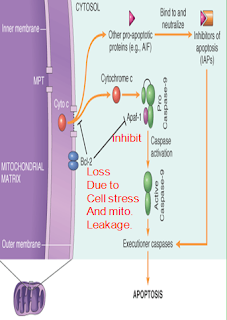 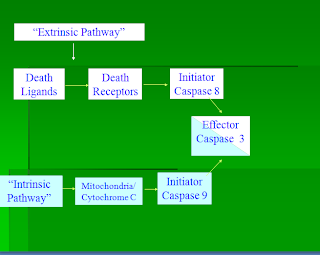 This the final phase of apoptosis which is mediated by proteolytic cascade.
caspase 3 and caspase 6 acts as executioner caspases.Intiator caspase are cleaved to there active form by two pathways.

they will activate excecutioner caspases, which act on several cellular components. 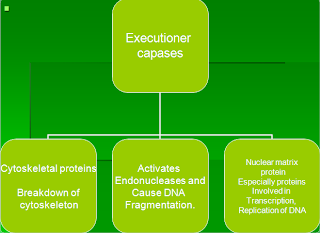 Removal of dead cells.
Apoptotic cells and their fragments have marker molecules on their surfaces that facilitate uptake and disposal by adjacent cells or phagocyte.
Alterations on the cell surface leads to formation of marker molecules, which allow the early recognition and phagocytosis of apoptotic cells without release of proinflammatory mediators. The process is so efficient that dead cells disappear without leaving a trace, and inflammation is virtually absent. 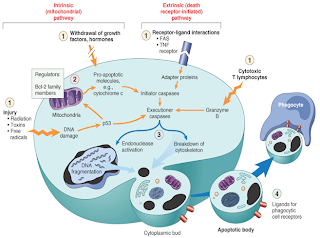 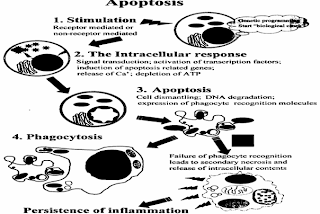 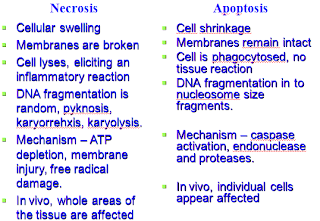 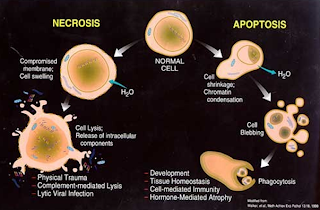 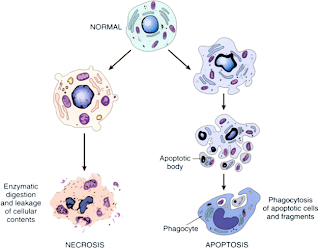 at March 01, 2011
Email ThisBlogThis!Share to TwitterShare to FacebookShare to Pinterest
Labels: Pathology