A blood clot within a blood vessel or within the heart 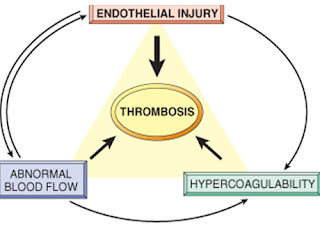 Differs according to the site of thrombosis
In heart and aorta: mural thrombi have lines of Zahn due to layers of RBC alternating with layers of platelet and fibrin

Arterial thrombi: usually superimposed on a plaque rupture or due to trauma or vasculitis: appears gray white and friable due to less RBC in the clot

Venous thrombi or phlebothrombosis: forms a long cast due to slow blood flow, red due to RBC collection 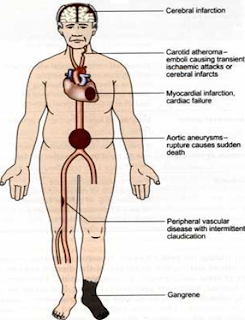 Fate of a thrombus 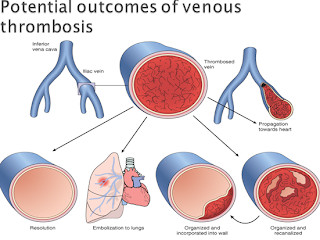 A detached intravascular solid, liquid or gaseous mass that is carried by the blood to a site distant from its point of origin
99% of the emboli are dislodged thrombi, hence, the term THROMBOEMBOLISM
Potential consequence of embolism is INFARCTION of the tissue distal to it.

In greater than 95% of cases, pulmonary emboli originate from deep leg vein thrombi above the level of the knee.

Saddle embolus- A large pulmonary thromboembolus impacting across the bifurcation of pulmonary artery. 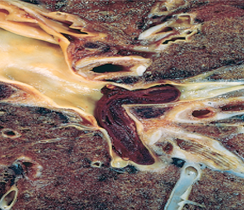 Paradoxical embolism – A rare condition where an venous thromoembolus may pass through an interatrial (more common) or interventricular defect to gain access to the systemic circulation.

Frequently, pulmonary thromboemboli are multiple, sequential emboli.
In general, a patient who has had one pulmonary embolus is at high risk of having more.

With left sided cardiac failure & sluggish bronchial artery flow a pulmonary embolus may cause a large infarct. But, with normal cardiac function these emboli in medium size pulmonary artery will cause pulmonary hemorrhage but no infarct.

Emboli into small end-arteries cause infarct.
Multiple emboli over time will cause Pulmonary Hypertension and Right Heart Failure.
Most pulmonary emboli (60-80%) ARE CLINICALLY SILENT.

80% are intra cardiac mural thrombi.
Rest- are from ulcerated atherosclerotic plaque or vascular vegetation or aortic aneurysm.
These can lodge anywhere in the body (as opposed to venous emboli, which can ONLY lodge in lungs with exception of PARADOXICAL EMBOLI).
COMMON SITES: 75% - L. Limbs. 10% - Brain.
Rest - Intestine, Kidneys, Spleen, upper extremities.

Happens in 90% case; but, ONLY 1% have clinical findings.

Pulmonary insufficiency, neurologic symptoms.
Fatal in about 10 % case.
Symptoms appear 1-3 days after injury with sudden onset of tachypnea, dyspnea, and tachycardia.
Neurologic symptoms are irritability, restlessness with progression to delirium and coma.

Expossure to sudden changes in atmospheric pressure.
Scuba and deep sea divers, under water construction workers, people in unpressurized air craft in rapid ascent are at risk.
Characterised by
bends – painful condition due to rapid formation of gas bubbles within skeletal muscles and supporting tissues in and about joints (derived from Grecian bend)
Chokes – edema, hemorrhages, and focal atelectasis or emphysema in lungs leading to respiratory distress
Caisson Disease – a chronic form of decompression sickness in which the vascular obstruction causes multiple foci of ischemic necrosis of bone, particularly affecting the head of the femur, tibia and humerus

CAUSE: Tear in placental membrane and rupture of uterine veins.

If the patient survives the initial crisis, pulmonary edema typically develops, along with DIC, due to release of thrombogenic substances from amniotic fluid.
FINDINGS: In lungs: Squamous cells, shed from fetal skin, lanugo hair, fat from vernix caseosa.
at February 22, 2011
Email ThisBlogThis!Share to TwitterShare to FacebookShare to Pinterest
Labels: Pathology