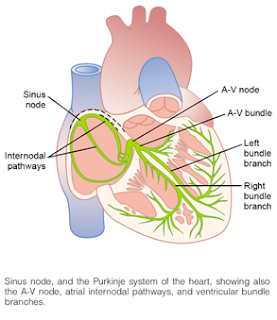 -is a small, flat , ellipsoid strip of specialized cardiac muscle
-is located in superior posterolateral wall of rt atrium below and lateral to opening of SVC
-is directly connected to atrial muscle fiber, so AP generated in SA node immediately spreads to atria
-it is the pacemaker of heart
-RMP: -55 to -60 mV ( in ventricle is -85 to -90 mV), SA node is leaky to Na, Ca ions
-heart muscle have 3 types of pump: fast Na pump, slow Na-Ca pump, K pump
-in SA node fast Na pump is inactive and AP is due to slow Na- Ca pump & K pump
-SA node is self excitatory: this is due to high Na ions concentration in ECF and its membrane is leaky to Na ions . Because of this +ve Na ions enters itself and causes RMP to more than threshold leading to AP.
-Threshold: -40 mV

-located in the posterior wall of rt atrium immediately behind tricuspid valve
-it delays the impulse conduction from atria to ventricles
-this delays allow atria to empty its content into ventricles before ventricles contract.
-it causes delay of 0.09 sec and another 0.04 sec is due to penetrating portion of AV bundle, also it takes 0.03 sec for impulse to come fromSA node to Av node. Total delay is 0.16 sec.
-slow conduction is due to dec gap junctions between conducting cells.

-there is rapid transmission through ventricles due to specialized purkinje fibers.
-velocity is 1.5- 4 m/s and this is 6 time that in usual ventricle muscles
-high level of permeability at gap junctions
-impusle from SA node goes to ventricles only through purkinje fibers
-there is complete insulation between atria and ventricles except at AV bundle
-impulse travels in one direction only from Sa node to ventricles. 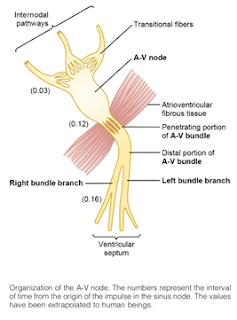 Control of excitation & conduction in heart

-SA node is the pacemaker of heart, discharging impulse at 70-80/min
-AV node, purkinje fiber can also exhibit intrinsic rhythmic excitation as SA node
-AV node can discharge impulse at rate of 40-60/min and purkinje at 15-40 /min if they are not stimulated from outside source.

- The dicharge rate of SA node is faster than the self excitatory discharge rate of others. Each time SA node discharges, its impulses is conducted through AV node and purkinje fibers and also depolarises their membrane. The depolarisation occurs before their membrane can reach to self excitatory threshold thus SA node inhibits impulse generation from AV node and purkinje fiber. Thus SA node is known as the pacemaker of heart.

-If there is AV block impulse will be generated from purkinje at rate of 15-40/min but atria will be beating normally. Purkinje will self generate impluse only after 5-20 sec because previously its function was suppressed by SA node. So during this time ventricles will not function and there will be lack of blood to brain and person faints and after sometime regains consciousnes. This is known as Stokes Adams Syndrome

-Vagus stimulation decreases heart rate and sometime even block heart and this is due to Ach release .Ach increases the permeability of K ions and makes membrane hyperpolarised(-65 to -75 mV)