1.Vasoconstriction due to local neural response, and release of endothelin from the endothelium

2.Primary hemostatic plug: due to platelet adhesion, activation, degranulation(ADP, TXA2) and recruitment of other platelets

3.Secondary hemostasis due to activation of coagulation cascade by tissue factor and phospholipid via extrinsic pathway- the end result being fibrin which traps the cells in the blood forming a clot 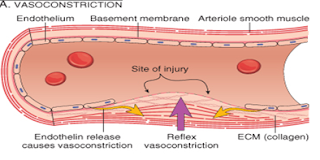 As a result of neurogenic reflex mechanism, there is a brief period of vasoconstriction added by local release of endothelin from the injured endothelium of blood vessel 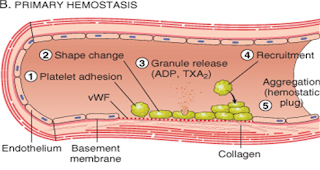 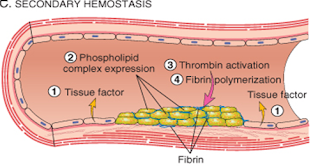 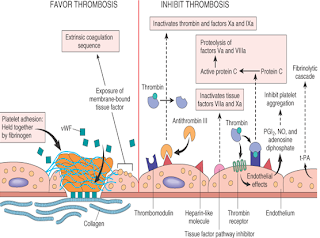 express the adhesion molecule P-selectin on their membranes and contain 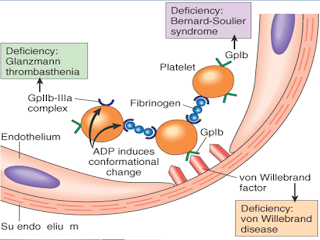 To sub-endothelial ECM constituents
Bridged by vWF, a product of endothelial cells
Platelet attaches to it via GpIb receptor

Occurs soon after adhesion
initiated by the binding of agonists to platelet surface receptors followed by an intracellular phosphorylation cascade
Release of delta granules is more important particularly of ADP and calcium
ADP activation of platelets is essential for platelet aggregation, further release of ADP and phospholipid complex expression

Apart from ADP, TXA2, a product of platelet set up an autocatalytic reaction leading to build-up of an enlarging platelet aggregate, the primary hemostatic plug
Thrombin from coagulation cascade binds to a platelet surface receptor (PAR) and with ADP and TXA2 causes further aggregation.

At the same time, thrombin converts fibrinogen to fibrin within and about the platelet plug, essentially cementing the platelets in place

ADP activation of platelets induces a conformational change of the platelet surface exposing GpIIb-IIIa receptors so that they can bind fibrinogen. Fibrinogen then acts to connect multiple platelets together to form large aggregates.

The coagulation cascade is essentially a series of enzymatic conversions, turning inactive proenzymes into activated enzymes and culminating in the formation of thrombin.
Thrombin then converts the soluble plasma protein fibrinogen into the insoluble fibrous protein fibrin.

Each reaction in the pathway results from the assembly of a complex composed of :
enzyme (activated coagulation factor),
a substrate (proenzyme form of coagulationfactor),
a cofactor (reaction accelerator).

These components are assembled on a phospholipid complex and held together by calcium ions. 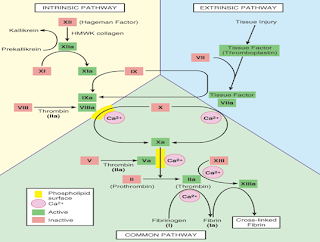 Once activated the coagulation cascade must be restricted to the local site of vascular injury to prevent clotting of the entire vascular tree.
Regulated by three types of natural anticoagulants

With onset of coagulation cascade, fibrinolytic cascade is also activated to limit the the size of final clot
Primarily accomplished by plasmin

at February 19, 2011
Email ThisBlogThis!Share to TwitterShare to FacebookShare to Pinterest
Labels: Physiology