"an abnormal mass of tissue the growth of which exceeds and is uncoordinated with that of the normal tissues and persists in the same excessive manner after the cessation of the stimuli which evoked the change."

Malignant, as applied to a neoplasm, implies that the lesion can invade and destroy adjacent structures and spread to distant sites (metastasize)
All tumors have 2 components
1) the parenchyma, made up of transformed or neoplastic cells, a tumor derives ite name from it and
(2) the supporting, host-derived, non-neoplastic stroma, made up of connective tissue, blood vessels, and host-derived inflammatory cells
The consistency of a neoplasm is determined by the amount of stromal tissue into it; the lesser the softer

According to Histogenetic origin i.e. the tissue or cell type from which the tumor arose and can generally be divided into epithelial and mesenchymal types

Mixed Tumors – originated from one germ layer, and created by a divergent differentiation of a single pluripotent cell into another tissue;
e.g. pleomorphic adenoma of parotid, fibroadenoma breast
Teratoma - contains recognizable mature or immature cells or tissues representative of more than one germ-cell layer and sometimes all three.
Teratomas originate from totipotential cells such as those normally present in the ovary and testis and sometimes abnormally present in sequestered midline embryonic rests. 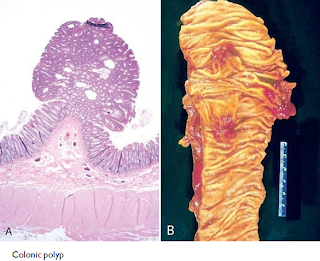 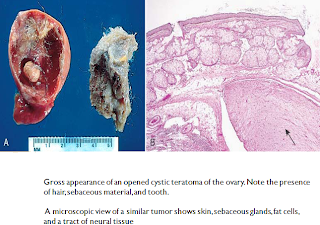 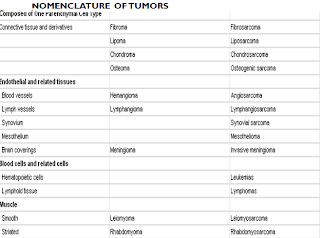 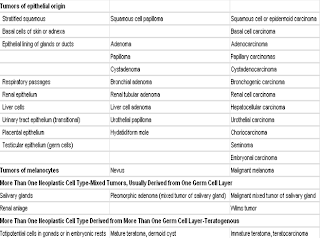 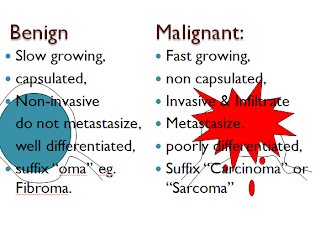 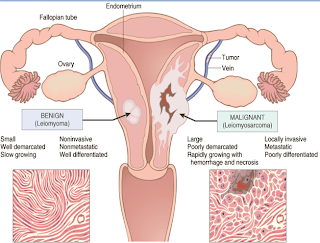 The natural history of malignant tumors can be divided into four phases;

the more rapidly growing and the more anaplastic a tumor, the less likely it is to have specialized functional activity

pleomorphism (i.e., marked variation in size and shape)
the nuclei are extremely hyperchromatic (darkly stained) and large. The nuclear-to-cytoplasmic ratio may approach 1 : 1 instead of the normal 1 : 4

Giant cells that are considerably larger than their neighbors may be formed and possess either one enormous nucleus or several nuclei.

Anaplastic nuclei are variable and bizarre in size and shape. The chromatin is coarse and clumped, and nucleoli may be of astounding size.

mitoses are often numerous and distinctly atypical; multiple spindles may be seen and sometimes appear as tripolar or quadripolar forms

Dysplasia - Loss of architecture but polarity is maintained

Ca-in-situ - When dysplastic changes are marked and involve the entire thickness of the epithelium, the lesion is referred to as carcinoma in situ, a preinvasive stage of cancer

Malignant neoplams - grow much faster, eventually spreading locally and to distant sites (metastasizing) and causing death. Rapidly growing malignant tumors often contain central areas of ischemic necrosis because the tumor blood supply, derived from the host, fails to keep pace with the oxygen needs of the expanding mass of cells

The rate of growth of a tumor is determined by three factors: 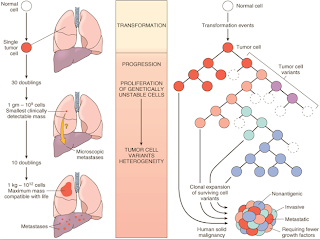 A benign neoplasm remains localized at its site of origin. It does not have the capacity to infiltrate, invade, or metastasize to distant sites, as do malignant neoplasms

as fibromas and adenomas slowly expand, most develop an enclosing fibrous capsule

the leiomyoma of the uterus is discretely demarcated from the surrounding smooth muscle by a zone of compressed and attenuated normal myometrium, but there is no well-developed capsule

Cancers grow by progressive infiltration, invasion, destruction, and penetration of the surrounding tissue. They do not develop well-defined capsules

development of secondary implants (metastases) discontinuous with the primary tumor, in remote tissues

the more anaplastic and the larger the primary neoplasm, the more likely is metastatic spread

Different ways of metastasis of tumor

cancers of the ovary, which often cover the peritoneal surfaces widely
medulloblastoma or ependymoma, may penetrate the cerebral ventricles and be carried by the cerebrospinal fluid to reimplant on the meningeal surfaces

is more typical of carcinomas, whereas hematogenous spread is favored by sarcomas
Carcinoma of the breast usually arises in the upper outer quadrant and first spreads to the axillary nodes
skip metastases
ultimately to reach the vascular compartment via the thoracic duct
"sentinal lymph node" is defined as the first lymph node in a regional lymphatic basin that receives lymph flow from a primary tumor. It can be delineated by injection of blue dyes

Since all portal area drainage flows to the liver, and all caval blood flows to the lungs, the liver and lungs are the most frequently involved secondary sites in hematogenous dissemination
Cancers arising near the vertebral column often embolize through the paravertebral plexus
carcinomas of the thyroid and prostate
Renal cell carcinoma often invades the renal vein to grow in a snakelike fashion up the inferior vena cava, sometimes reaching the right side of the heart. 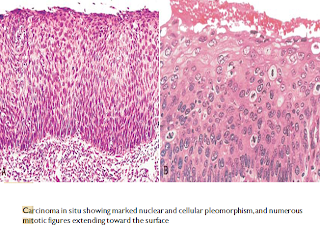 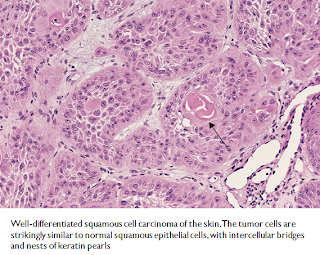 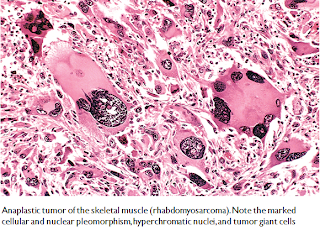 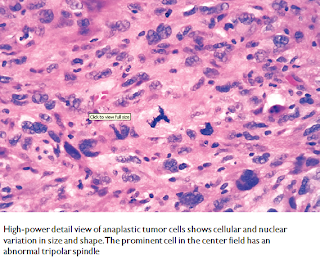 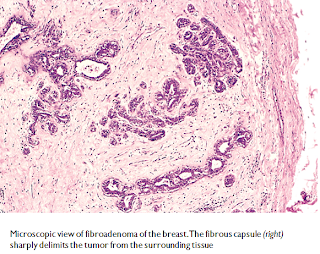 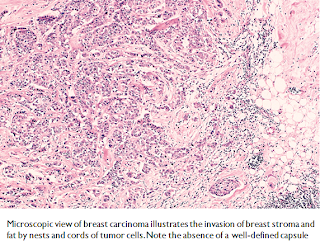 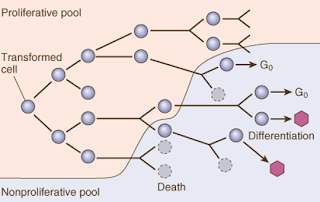 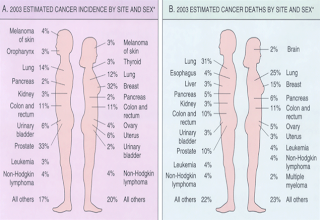 the frequency of cancer increases with age. Most cancer mortality occurs between ages 55 and 75
accumulation of somatic mutations
cancers in children are leukemia, tumors of the central nervous system, lymphomas, soft tissue sarcomas, retinoblastoma, Wilms tumor, and bone sarcomas

Childhood retinoblastoma is the most striking example of this category. Approximately 40% of retinoblastomas are familial
Familial adenomatous polyposis is another hereditary disorder marked by an extraordinarily high risk of cancer. Innumerable polypoid adenomas of the colon, and virtually 100% of patients develop a carcinoma of the colon by age 50

Familial cancer syndrome: no clear pattern of transmission
Features that characterize familial cancers include early age at onset, tumors arising in two or more close relatives of the index case, and sometimes multiple or bilateral tumors
Examples include carcinomas of colon, breast, ovary, and brain

the chances of these turning to malignant neoplasm is very minimal

Nonlethal genetic damage lies at the heart of carcinogenesis, caused by chemicals, radiation, or viruses, or it may be inherited in the germ line
Four classes of normal regulatory genes are involved
growth-promoting proto-oncogenes,
growth-inhibiting tumor suppressor genes,
genes that regulate apoptosis
genes involved in DNA repair

Mutant alleles of proto-oncogenes are called oncogenes. They are considered dominant because mutation of only one allele is enough to produce cancer

In contrast, typically both normal alleles of tumor suppressor genes must be damaged for transformation to occur, so this family of genes is sometimes referred to as recessive

Carcinogenesis is a multistep process at both the phenotypic and the genetic levels, resulting from the accumulation of multiple mutations

tumor progression and associated heterogeneity most likely result from multiple mutations that accumulate independently in different cells, generating subclones with different characteristics, such as ability to invade, rate of growth, metastatic ability, karyotype, hormonal responsiveness, and susceptibility to anti-neoplastic drugs

Even though most malignant tumors are monoclonal in origin, by the time they become clinically evident, their constituent cells are extremely heterogeneous 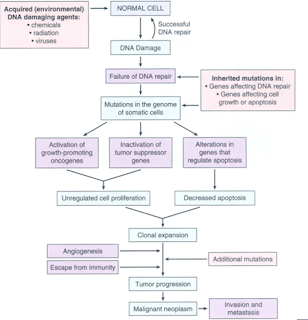 at February 20, 2011
Email ThisBlogThis!Share to TwitterShare to FacebookShare to Pinterest
Labels: Oncology