Carcinomas of "no special type" or "not otherwise specified" are synonyms

produce a desmoplastic response, which replaces normal breast fat (resulting in a mammographic density) and forms a hard, palpable mass

microscopic appearance is quite heterogeneous, ranging from tumors with well-developed tubule formation and low-grade nuclei to tumors consisting of sheets of anaplastic cells

Invasion of lymphovascular spaces or along nerves may be seen.

Advanced cancers may cause dimpling of the skin, retraction of the nipple, or fixation to the chest wall.

About two-thirds express estrogen or progestagen receptors, and about one-third overexpress HER2/NEU

is defined by the clinical presentation of an enlarged, swollen, erythematous breast, usually without a palpable mass.

The underlying carcinoma is generally poorly differentiated and diffusely invades the breast parenchyma.

The blockage of numerous dermal lymphatic spaces by carcinoma results in the clinical appearance. True inflammation is minimal or absent.

Most of these tumors have distant metastases, and the prognosis is extremely poor

consists of cells morphologically identical to the cells of LCIS.

Two-thirds of the cases are associated with adjacent LCIS.
The cells invade individually into stroma and are often aligned in strands or chains.

Involvement of the lymphatic pathways may cause localized lymphedema. In these cases the skin becomes thickened around exaggerated hair follicles, a change known as peau d'orange (orange peel).

Those in the inner quadrants often involve the lymph node along the internal mammary arteries. The supraclavicular nodes are sometimes the primary site of spread,

Favored locations are the lungs, skeleton, liver, and adrenals and (less commonly) the brain, spleen

The size of the primary carcinoma. Invasive carcinomas smaller than 1 cm have good prognosis

The first one or two draining lymph nodes are identified by using a dye or a radioactive tracer, or both. A negative sentinel lymph node is highly predictive of the absence of metastatic carcinoma

The grade of the carcinoma

The histologic type of carcinoma. All specialized types of breast carcinoma (tubular, medullary, cribriform, adenoid cystic, and mucinous) have a somewhat better prognosis than carcinomas of no special type ("ductal carcinomas").

The presence or absence of estrogen or progesterone receptors. The presence of hormone receptors confers a slightly better prognosis: response (∼80%) to anti-estrogen therapy (oophorectomy or tamoxifen) is seen
The proliferative rate of the cancer. Proliferation can be measured by mitotic counts

Overexpression of HER2/NEU: Overexpression is associated with a poorer prognosis, but also predict response to a monoclonal antibody ("Herceptin") to the gene product. 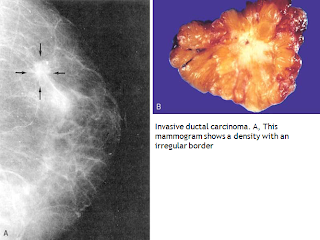 A. Well-differentiated invasive carcinoma of no special type( NOS). Well-formed tubules and nests of cells with small monomorphic nuclei invade into the stroma with a surrounding desmoplastic response. 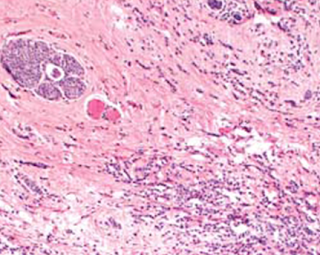 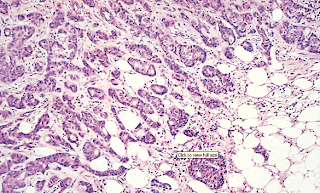 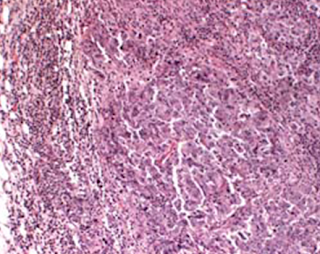 Medullary carcinoma. The cells are highly pleomorphic with frequent mitoses and grow as sheets of cohesive cells. A lymphoplasmacytic infiltrate is prominent 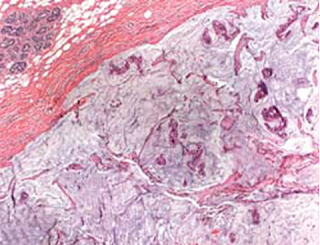 Mucinous (colloid) carcinoma. The tumor cells are present as small clusters within large pools of mucin. The borders are typically well circumscribed, and these cancers often mimic benign masses

at February 15, 2011
Email ThisBlogThis!Share to TwitterShare to FacebookShare to Pinterest
Labels: Oncology