Heart muscles,as a pump and functions of valves 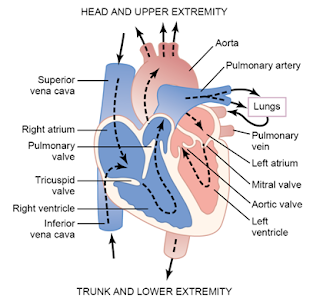 -Cardiac muscles are striated muscle with actin and myosin filaments sliding along side of each other as skeletal muscle. 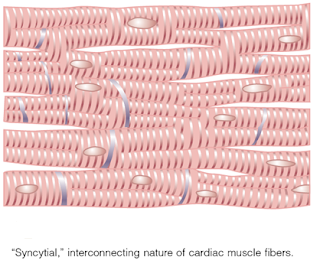 RMP: -85 mV
Peak/spike potential: +20 mV
After spkie potential it remains depolarised for about 0.2 sec called plateau phase and then only repolarization occurs. Plateau is the characteristics of heart muscle. Because of plateau ventricular muscles remains in contraction for 15 times longer duration than skeletal muscles.

Causes of plateau in Cardiac muscles

1.The cause of action potential in cardiac muscle is by opening of 2 types of channels:
a. fast Na ions channels
b. slow Na- Ca ions channels ( not present in skeletal muscles)

Velocity of conduction in cardiac muscles 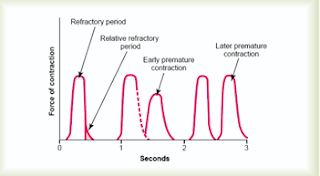 -It is the mechanism by which action potential causes myofibrils to contract.

-When action potential reaches T tubules it causes releae of Ca ions from t tubules itself and cisternae of sarcoplasmic reticulum.

-The difference is that there are two Ca ions source: one is from cisternae of sarcoplasmic reticulum and the another is from T tubules itself. Because of the extra Ca from T tubules the cardiac muscles contraction is strong. The diameter of T tubules is bigger and it also contains large number of negative ions which binds Ca ions and releases when action potential reaches T tubules. 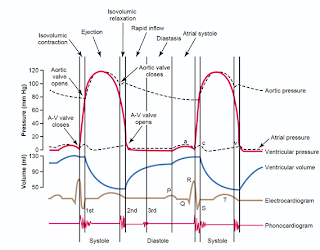 Diastole is the phase of cardiac cycle during which heart remains relaxed and is filled with blood .

Systole is the phase during which heart remains contracted and pumps blood out.

First heart sound:
is due to closure of A-V valves when ventricle starts to contract

Second heart sounds:
closure of aortic and pulmonary valves at end of systole

Relationship between left ventricular volume and intraventricular pressure during diastole and systole. 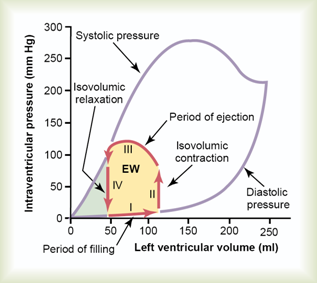 Afterload is the pressure/load against which the ventricle has to contract and is the systolic pressure.

1.Intrinsic regulation of heart pumping (Frank starling mechanism):
Within physiologic limit, the greater the heart muscle stretched during blood filling, greater is the force of contraction and greater quantity of blood is pushed into aorta. This is known as Frank-starling mechanism. 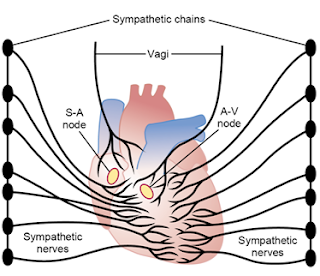 Effect of temperature on heart function

Dec temperature:
decrease heart rate ; is due to less ions are permaeble to heart muscles membrane at low temp