In contrast, LCIS usually expands but does not alter the underlying lobular architecture

Both are confined by a basement membrane and do not invade into stroma or lymphovascular channels.

DCIS has a wide variety of histologic appearances. Architectural patterns are often mixed and include solid, comedo, cribriform, papillary, micropapillary, and clinging types

Calcifications are frequently associated with DCIS, as a result of either calcified necrotic debris or secretory material

express estrogen and, less often, progesterone receptors. The prognosis for DCIS is excellent, with over 97% long-term survival after simple mastectomy

Treatment with the tamoxifen, a SERM may also decrease the risk of recurrence. Treatment with aromatase inhibitors for postmenopausal women is being examined

Paget disease of the nipple is caused by the extension of DCIS up to the lactiferous ducts and into the contiguous skin of the nipple.
The malignant cells disrupt the normal epidermal barrier, which allows extracellular fluid to be extruded onto the surface.
The clinical appearance is usually of a unilateral crusting exudate over the nipple and areolar skin 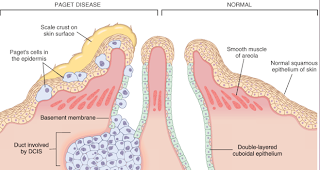 Paget disease of the nipple. DCIS arising within the ductal system of the breast can extend up the lactiferous ducts into nipple skin without crossing the basement membrane. The malignant cells disrupt the normally tight squamous epithelial cell barrier, allowing extracellular fluid to seep out and form an oozing scaly crust over the nipple skin

A, Papillary DCIS. Delicate fibrovascular cores extend into a duct and are lined by tall columnar cells. Myoepithelial cells are absent.

B,This solid DCIS has almost completely filled and distorted this lobule. This type of DCIS is not usually associated with calcifications and may be clinically occult. 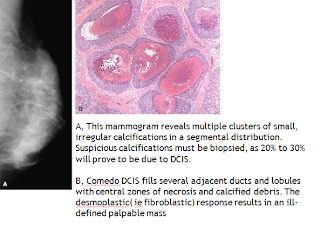 at February 15, 2011
Email ThisBlogThis!Share to TwitterShare to FacebookShare to Pinterest
Labels: Oncology