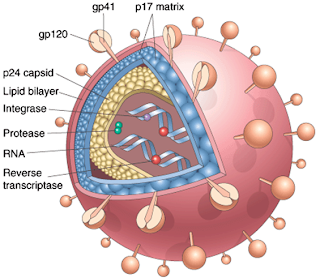 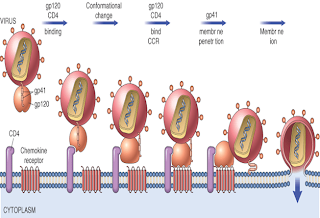 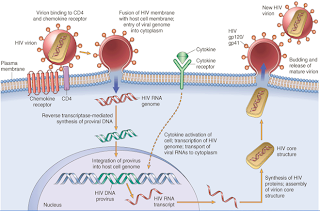 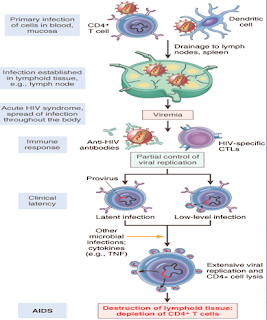 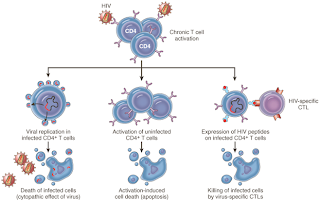 HIV 1 and 2: type 2 is predominantly found in west africa

The virus is present in semen, both extracellularly and within mononuclear inflammatory cells, and it enters the recipient's body through lacerations or abrasions in mucosa

diseases that cause genital ulcerations, including syphilis, chancroid, and herpes simplex virus.

Female to male transmission has a very low probability compared to the reverse.

screening of donated blood and plasma for antibody to HIV, screening for HIV-associated p24 antigen (detectable before the development of antibodies) and heat treatment of clotting factor concentrates have decreased the incidence in this group

accidental needle-stick injury in health workers: risk of transmission is much lower than hepatitis B

Virion has major capsid protein(p24), nucleocapsid and lipid bilayer derived from the cell that it infects

viral envelope itself is studded by two viral glycoproteins (gp120 and gp41), critical for HIV infection of cells

Pol: encodes polymerase, integrase and reverse transcriptase
Protease is necessary for cleaving all the precursor proteins derived from other genes( Cf protease inhibitor drugs)
Integrase helps in integrating the viral genome into the chromosome of the cell

CD4:CD8 cell ratio is reversed from 2 to less than 0.5 Other immune cells in HIV:

Follicular dendritic cells in the LN are also important reservoir

B cells undergo polyclonal activation with hypergammaglobulinemia, but the cells are unable to mount effective antibody response

Defective opsonisation of capsulated bacteria like Meningococcus, Pneumococcus and Hemophilus

Predominantly due to selective loss of the CD4+ helper-inducer T-cell subset; inversion of CD4:CD8 ratio

Flu like symptoms start 3 to 6 wks after innoculation, representing high level of viremia, seeding of different lymphoid tissue and abrupt fall in CD4 Slowly the immune system of the body tries to clear the infected cells, the CD4 count rises and seroconversion occurs( ie Antibody against the virus is detectable)

Morphology of a LN in AIDS:

Normal structure of a LN 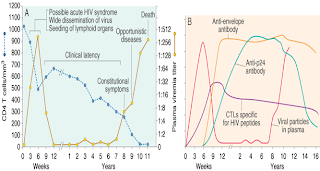 Natural course of HIV and the different diagnostic modalities

at February 15, 2011
Email ThisBlogThis!Share to TwitterShare to FacebookShare to Pinterest
Labels: Pathology