A.The density of a young woman's breast is due to the predominance of fibrous interlobular stroma and the paucity of adipose tissue .

B. Prior to pregnancy, the terminal duct lobular units (TDLUs) are small and are invested by loose cellular intralobular stroma.

C. During pregnancy, branching of terminal ducts results in more numerous TDLUs, and the number of acini per TDLU increases. Luminal cells within TDLUs undergo lactational change in preparation for milk production.

D. With increasing age, the TDLUs decrease in size and number, and the interlobular stroma is replaced by adipose tissue. 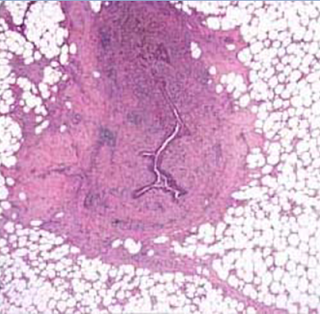 Mammary duct ectasia. Chronic inflammation and fibrosis surround an ectatic duct filled with inspissated debris. The fibrotic response can mimic the irregular shape of malignant carcinomas on palpation or mammogram. 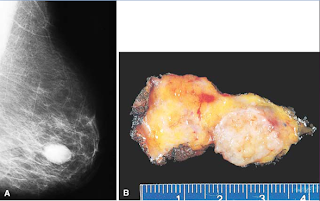 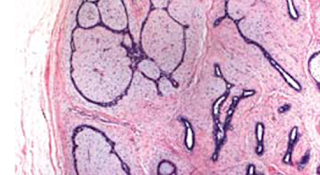 Fibroadenoma. The lesion consists of a proliferation of intralobular stroma surrounding and often pushing and distorting the associated epithelium. The border is sharply delimited from the surrounding tissue 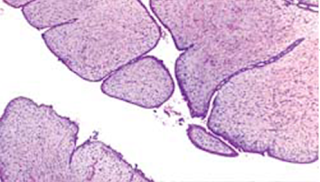 Phyllodes tumor. Compared to a fibroadenoma, there is increased stromal cellularity, cytologic atypia, and stromal overgrowth, giving rise to the typical leaflike
architecture. 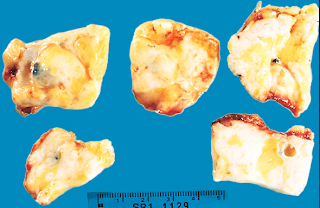 Several biopsy specimens showing fibrocystic change of the breast. The scattered, poorly demarcated white areas represent foci of fibrosis. The biopsy specimen at the lower right reveals a transected empty cyst; those on the left have unopened blue dome cysts 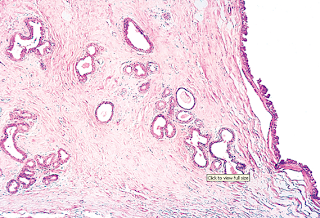 Microscopic detail of fibrocystic change of the breast revealing dilation of ducts producing microcysts and, at right, the wall of a large cyst with visible lining epithelial cells.

A, Normal. A normal duct or acinus has a myoepithelial cell layer and a single luminal cell layer

B, Epithelial hyperplasia. The lumen is filled with a heterogeneous population of cells of different Morphologies with Irregular slitlike fenestrations

Sclerosing adenosis. The involved terminal duct lobular unit is enlarged, and the acini are compressed and distorted by the surrounding dense stroma. Calcifications are often present within the lumens.

It is mistaken for an invasive carcinoma, since the mammographic appearance is also similar. 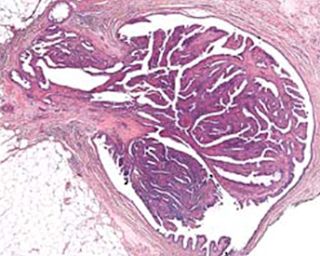 Intraductal papilloma. A central fibrovascular core extends from the wall of a duct. The papillae arborize within the lumen and are lined by myoepithelial and luminal cells

A, Atypical ductal hyperplasia with slit like spaces. It falls short of a diagnosis of DCIS.