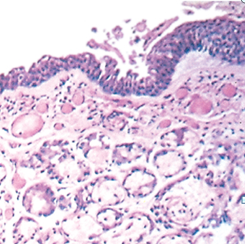 hypersecretion of mucus, beginning in the large airways is the hallmark of the disease

cigarette smoking, other air pollutants, such as sulfur dioxide and nitrogen dioxide are the major predisposing factors

Obstruction is explained by the "small airway disease," induced by goblet cell metaplasia with mucus plugging of the bronchiolar lumen; inflammation and bronchiolar wall fibrosis as well as coexistent emphysema.

ratio of the thickness of the submucosal gland layer to that of the bronchial wall (Reid index; normally 0.4

complete obliteration of the lumen due to fibrosis (bronchiolitis obliterans) may be seen in some.
at February 02, 2011
Email ThisBlogThis!Share to TwitterShare to FacebookShare to Pinterest
Labels: Pathology