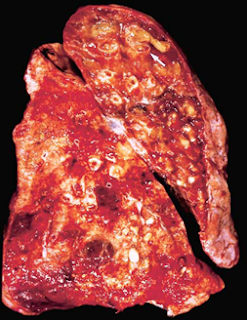 permanent dilation of bronchi and bronchioles caused by destruction of the muscle and elastic supporting tissue, resulting from or associated with chronic necrotizing infections

c/f: cough and expectoration of copious amounts of purulent sputum

Necrotizing, or suppurative, pneumonia, esp with virulent organisms like Staphylococcus aureus or Klebsiella

pneumonia that complicated measles, whooping cough, and influenza are important causes in children

Morphology of a bronchiectatic lung:

lower lobes are usually involved, bilaterally
Bronchiectasis due to foreign bodies may be sharply localized to a single segment of the lungs

May frequently form a lung abscess. 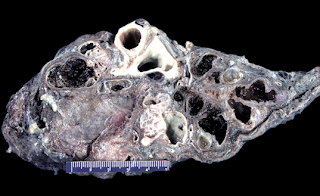 at February 02, 2011
Email ThisBlogThis!Share to TwitterShare to FacebookShare to Pinterest
Labels: Pathology