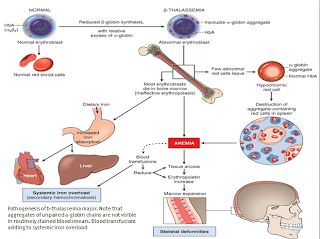 Thalassemia syndromes are a heterogenous group of inherited disorders caused by genetic lesions leading to decreased synthesis of either alpha or beta globin chain of Hb A.

β Thalassemia
The β-globin mutations associated with β-thalassemia fall into two categories:
(1) β0, in which no β-globin chains are produced; and
(2) β+, in which there is reduced (but detectable) β-globin synthesis

Individuals inheriting one abnormal allele have thalassemia minor or thalassemia trait, which is asymptomatic or mildly symptomatic.

Most individuals inheriting any two β0 and β+ alleles have β-thalassemia major;

The reduced synthesis of β-globin leads to inadequate HbA formation, so that the MCHC is low, and the cells appear hypochromic and microcytic.

more important is red cell hemolysis, which results from the unbalanced rates of β-globin and α-globin chain synthesis.

Most of the α-thalassemias are caused by deletions that remove one or more of the α-globin gene loci. The severity of the disease that results from these lesions is directly proportional to the number of α-globin genes that are missing

With loss of three α-globin genes there is a relative excess of β-globin or chains other than α-globin. Excess β-globin forms relatively stable β4 tetramers known as HbH that cause less membrane damage than do free α-globin chains.

In all gene deletions, gamma4 tetramer is present known as Hb Bart.

The hemolytic anemia and ineffective erythropoiesis tend be less severe in α-thalassemia than in β-thalassemia.

Unfortunately, both HbH and Hb Bart have an abnormally high affinity for oxygen, which renders them ineffective at delivering oxygen to the tissues.

hyperplasia of erythroid progenitors, with a shift toward early forms.

produce growth retardation and a degree of cachexia

Affected children fail to develop normally, and their growth is retarded from shortly after birth. They are sustained only by repeated blood transfusions, but gradually systemic iron overload develops

Unless steps are taken to prevent iron overload, over the span of years severe hemosiderosis develops, Unless patients are treated aggressively with iron chelators, cardiac failure

When feasible, bone marrow transplantation at an early age is the treatment of choice.
at January 16, 2011
Email ThisBlogThis!Share to TwitterShare to FacebookShare to Pinterest
Labels: Hematology