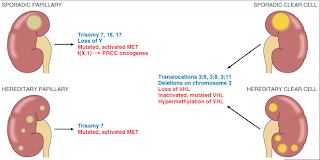 higher in smokers, hypertensive or obese patients, and those who have had occupational exposure to cadmium
develop acquired polycystic disease as a complication of chronic dialysis

Whereas the majority of them are sporadic, they also occur in familial forms or in association with von Hippel-Lindau (VHL) disease

VHL: hemangioblastomas of the cerebellum and retina. Hundreds of bilateral renal cysts and bilateral, often multiple, clear cell carcinomas develop in 40% to 60% of individuals

the loss of both copies of this tumor suppressor gene gives rise to clear cell carcinoma.
Morphology

yellow to orange to gray-white, with prominent areas of cystic softening or of hemorrhage

it may fungate through the walls of the collecting system, extending through the calyces and pelvis as far as the ureter

the tumor invades the renal vein and grows as a solid column within this vessel, sometimes extending in serpentine fashion as far as the inferior vena cava and even into the right side of the heart. Occasionally, there is direct invasion into the perinephric fat and adrenal gland

The classic vacuolated (lipid-laden), or clear cells are demarcated only by their cell membranes

At the other extreme are granular cells, resembling the tubular epithelium, which have small, round, regular nuclei enclosed within granular pink cytoplasm

The cells may form abortive tubules or may cluster in cords or disorganized masses. The stroma is usually scant but highly vascularized

frequently multifocal and bilateral and appear as early-stage tumors

Papillary renal cell carcinomas exhibit varying degrees of papilla formation with fibrovascular cores. They tend to be bilateral and multiple. They may also show gross evidence of necrosis, hemorrhage, and cystic degeneration, but they are less vibrantly orange-yellow because of their lower lipid content. The cells can have clear or, more commonly, pink cytoplasm.

They arise from intercalated cells of collecting ducts 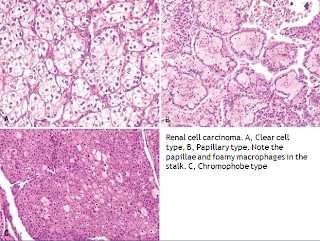 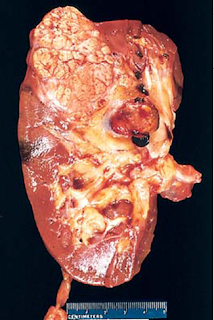 Renal cell carcinoma. Typical cross-section of yellowish, spherical neoplasm in one pole of the kidney. Note the tumor in the dilated thrombosed renal vein.
at January 11, 2011
Email ThisBlogThis!Share to TwitterShare to FacebookShare to Pinterest
Labels: Oncology