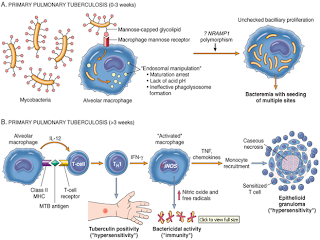 Droplet inhalation is the primary mode of infection

M. avium-intracellulare, are much less virulent than M. tuberculosis and rarely cause disease in immunocompetent individuals

The bacilli are obligate aerobes whose slow growth is retarded by a pH lower than 6.5, hence not found in the center of granuloma
caseating granulomas and cavitation, are the result of the destructive tissue hypersensitivity that is part and parcel of the host immune response

bacillary proliferation within the pulmonary alveolar macrophages and airspaces, with resulting bacteremia and seeding of multiple sites

Macrophages carry bacilli to the draining lymph nodes and are presented in a MHCII by dendritic cell/macrophages( APCs) to CD4+ T cells.

IFN-γ released by the CD4+ T cells of the TH1 subset is crucial in activating macrophages.
at January 15, 2011
Email ThisBlogThis!Share to TwitterShare to FacebookShare to Pinterest
Labels: Pathology