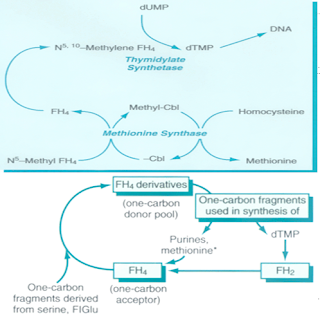 B12 or Folic acid deficiency

The morphologic hallmark of megaloblastic anemias is an enlargement of erythroid precursors (megaloblasts), which gives rise to abnormally large red cells (macrocytes

impairment of DNA synthesis, which results in a delay in nuclear maturation and cell division. Because the synthesis of RNA and cytoplasmic elements proceeds at a normal rate and thus outpaces that of the nucleus, the hematopoietic precursors show nuclear-cytoplasmic asynchrony

The bone marrow is markedly hypercellular, as a result of increased numbers of megaloblasts. These cells are larger than normoblasts and have a delicate, finely reticulated nuclear chromatin (suggestive of nuclear immaturity) and an abundant, strikingly basophilic cytoplasm

As the megaloblasts differentiate and begin to acquire hemoglobin, the nucleus retains its finely distributed chromatin and fails to undergo the chromatin clumping typical of an orthochromatic normoblast

Normally, neutrophils have three or four nuclear lobes, but in megaloblastic anemias neutrophils often have five or more.

The red cells typically include large, egg-shaped macro-ovalocytes; the MCV is often greater than 110 fL 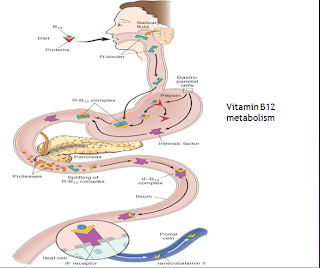 at January 15, 2011
Email ThisBlogThis!Share to TwitterShare to FacebookShare to Pinterest
Labels: Hematology