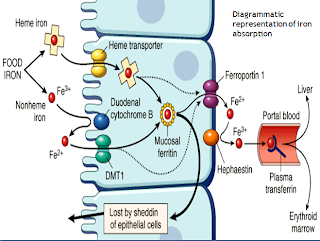 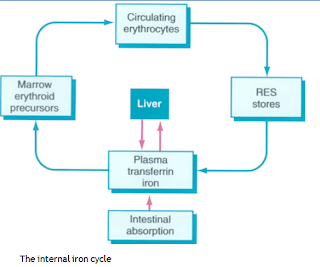 Total body iron content is about 2 gm for women and 6 gm for men.

Approximately 80% of functional body iron is found in hemoglobin, with the remainder being found in myoglobin and iron-containing enzymes (e.g., catalase and cytochromes).

The iron storage pool, represented by hemosiderin and ferritin-bound iron, contains on average 15% to 20% of total body iron. Stored iron is found mainly in the liver, spleen, bone marrow, and skeletal muscle.

Because serum ferritin is largely derived from the storage pool of iron, its concentration is a good indicator of the adequacy of body iron stores.

Iron is transported in the plasma by an iron-binding protein called transferrin. In normal persons, transferrin is about 33% saturated with iron, yielding serum iron levels that average 120 μg/dL in men and 100 μg/dL in women.

There is no regulated pathway for iron excretion, which is limited to the 1 to 2 mg/day that is lost by the shedding of mucosal and skin epithelial cells

About 20% of heme iron (in contrast to 1% to 2% of nonheme iron) is absorbable, so the average western diet contains sufficient iron to balance fixed daily losses

Iron is absorbed in the duodenum, where it must pass through the apical and basolateral membranes of enterocytes After reduction by ferric reductase

When the body is replete with iron, most of the iron that enters duodenal cells is bound to ferritin and never transferred to transferrin; whereas in iron deficiency, or when there is ineffective erythropoiesis, transfer to plasma transferrin is enhanced

At first iron stores are depleted, leading to a decline in serum ferritin and the absence of stainable iron in the bone marrow.

This is followed by a decrease in serum iron and a rise in the serum iron-binding capacity.

Ultimately the capacity to synthesize hemoglobin, myoglobin, and other iron-containing proteins is diminished, leading to anemia, impaired work and cognitive performance, and even reduced immunocompetence.

The red cells are microcytic and hypochromic, reflecting the reductions in MCV and MCHC

Although erythropoietin levels are increased, the marrow response is blunted by the iron deficiency, and thus the marrow cellularity is usually only slightly increased

weakness, listlessness, and pallor, may be present in severe cases. With long-standing severe anemia, thinning, flattening, and eventually "spooning" of the fingernails sometimes appears

neurobehavioral complication is pica, the compunction to consume non-foodstuffs such as dirt or clay 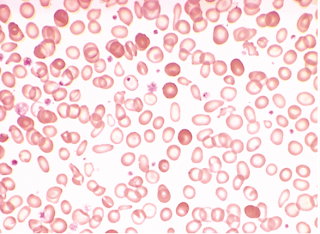 Hypochromic microcytic anemia of iron deficiency. Note the small red cells containing a narrow rim of hemoglobin at the periphery. Compare to the scattered, fully hemoglobinized cells derived from a recent blood transfusion given to the patient.

at January 15, 2011
Email ThisBlogThis!Share to TwitterShare to FacebookShare to Pinterest
Labels: Hematology