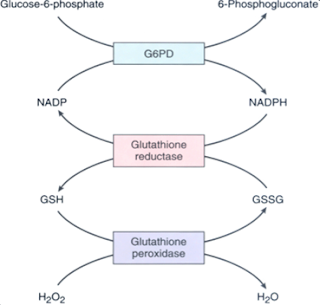 G6PD – is a rate limiting enzyme in HMP shunt pathway. This pathway is responsible for production of NADPH which is required in number of metabolic reactions. Of which one most important is reduction of Glutathione to GSH. It is antioxidant which protects cell membranes from free radical damage.
RBCs are sensitive to injury by oxidative stresses, so deficiency of GSH leads to hemolysis.

Defective production of GSH leads to

accumulation of Hydrogen peroxide,
which in turn denatures

Globin chains, it damages RBC membrane
to cause hemolysis.

Symptoms can present with symptoms of
Intravascular as well as extravascular hemolysis.

IV hemolysis – because of denaturation of Hb, and cell membrane damage in blood vessel initially.
Extravascular hemolysis – the cells which escpaes IV hemolysis, are bearing inclusion bodies (denatured Hb), so it becomes less deformable and sequestered in spleen leading to EV hemolysis.

Peripheral Smear
Heniz bodies - Denatured Hb is precipitated within the RBCs in the form of inclusions called Heinz bodies.
Bite cells - the inclusion-bearing RBCs are less deformable, and their cell membranes are further damaged when splenic phagocytes attempt to "pluck out" the inclusions, creating so-called bite cells
Other findings of IV or EV hemolysis Depanding on stage of disease. 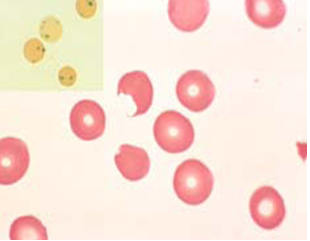 at January 16, 2011
Email ThisBlogThis!Share to TwitterShare to FacebookShare to Pinterest
Labels: Hematology