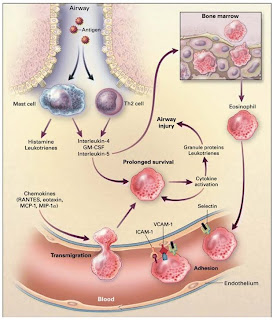 Once leukocytes have arrived at a site of infection or inflammation, they release mediators which control the later accumulation and activation of other cells. However, in inflammatory reactions initiated by the immune system, the ultimate control is exerted by the antigen itself, in the same way as it controls the immune response itself. For this reason, the cellular accumulation at the site of chronic infection, or in autoimmune reactions (where the antigen cannot ultimately be eradicated), is quite different from that at sites where the antigenic stimulus is rapidly cleared.

There are four major plasma enzyme systems which have an important role in haemostasis and control of inflammation. These are the complement system, the clotting system, the fibrinolytic (plasmin) system and the kinin system.

Inflammatory mediators are soluble, diffusible molecules that act locally at the site of tissue damage and infection, and at more distant sites. They can be divided into exogenous and endogenous mediators.

Bacterial products and toxins can act as exogenous mediators of inflammation. Notable among these is endotoxin, or LPS of Gram-negative bacteria. The immune system of higher organisms has probably evolved in a veritable sea of endotoxin, so it is perhaps not surprising that this substance avokes powerful responses. For example, endotoxin can trigger complement activation, resulting in the formation of anaphylatoxins C3a and C5a which cause vasodilation and increase vascular permeability. Endotoxin also activates the Hageman factor, leading to activation of both the coagulation and fibrinolytic pathways as well as the kinin system. In addition, endotoxin elicit T cell proliferation, and have been described as superantigen for T cells.

Endogenous mediators of inflammation are produced from within the (innate and adaptive) immune system itself, as well as other systems. For example, they can be derived from molecules that are normally present in the plasma in an inactive form, such as peptide fragments of some components of complement, coagulation, and kinin systems. Mediators of inflammatory responses are also released at the site of injury by a number of cell types that either contain them as preformed molecules within storage granules, e.g. histamine, or which can rapidly switch on the machinery required to synthesize the mediators when they are required, for example to produce metabolites of arachidonic acid.

Mononuclear phagocytes (monocytes and macrophages) are central to inflammation, as they produce many components which participate in or regulate the different plasma enzyme systems, and hence the mediators of the inflammatory response. They are also actively phagocytic and are involved in microbial killing, as are neutrophils. While the latter can be thought of as short-lived kamikaze cells that need to be continually replaced from the bone marrow, mononuclear phagocytes are long-lived and some can proliferate in situ. Other cells such as mast cells and basophils are much less phagocytic, but together with platelets, these cells are particularly important for secretion of vasoactive mediators. The function of these cell types is at least partially under the control of cytokines. All inflammatory cells have receptors for Fc domains of immunoglobulins and for complement components, and they possess specialized granules containing an immerse variety of products that are released perhaps by common mechanisms. Cytotoxic T lymphocytes and NK cells, in general, also possess granules which are important for their cytotoxic function. In general, lymphocytes are involved in the adaptive response to inflammation, and the early events of inflammation are mediated in part by molecules produced by cells of the innate arm of the immune system.

Early phase mediators are produced by mast cells and platelets. They are especially important in acute inflammation and include mainly histamine, serotonin and other vasoactive substances. Platelets may contribute to inflammatory responses resulting as a consequence of tissue injury, through a variety of mechanisms including:

the release of vasoactive amines and other permeability factors,
the release of lysosomal enzymes,
the release of coagulation factors which lead to localized and generalized fibrin deposition, and
the formation of platelet aggregates or trombi which result in the blocking of vessels and capillaries.
at April 11, 2010
Email ThisBlogThis!Share to TwitterShare to FacebookShare to Pinterest
Labels: Pathology