Vestibular Sensations and Maintenance of Equilibrium 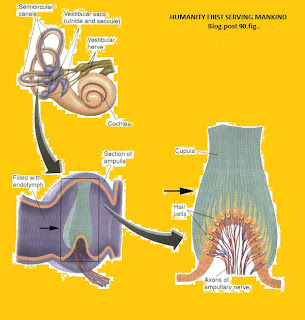 Vestibular Apparatus
The vestibular apparatus, is the sensory organ for detecting sensations of equilibrium.
It is encased in a system of bony tubes and chambers located in the petrous portion of the temporal bone, called the bony labyrinth.Within this system are membranous tubes and chambers called the membranous labyrinth. The membranous labyrinth is the functional part of the vestibular apparatus It is composed mainly of the cochlea (ductus cochlearis); three semicircular canals; and two large chambers, the utricle and saccule. The cochlea is the major sensory organ for hearing and has little to do with equilibrium. However, the semicircular canals, the utricle, and the saccule are all integral parts of the equilibrium mechanism.

Function of the Utricle and Saccule in the Maintenance of Static Equilibrium
It is especially important that the hair cells are all oriented in different directions in the maculae of the utricles and saccules, so that with different positions of the head, different hair cells become stimulated.The “patterns” of stimulation of the different hair cells apprise the brain of the position of the head with respect to the pull of gravity. In turn, the vestibular, cerebellar,
and reticular motor nerve systems of the brain excite appropriate postural muscles to maintain proper equilibrium.This utricle and saccule system functions extremely effectively for maintaining equilibrium when the head is in the near-vertical position. Indeed, a person
can determine as little as half a degree of dysequilibrium when the body leans from the precise upright position.