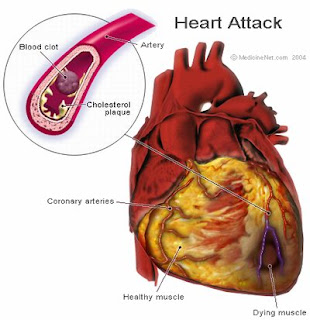 Immediately after an acute coronary occlusion, blood
flow ceases in the coronary vessels beyond the occlusion
except for small amounts of collateral flow from
surrounding vessels.The area of muscle that has either
zero flow or so little flow that it cannot sustain cardiac
muscle function is said to be infarcted. The overall
process is called a myocardial infarction.
Soon after the onset of the infarction, small amounts
of collateral blood begin to seep into the infarcted area,
and this, combined with progressive dilation of local
blood vessels, causes the area to become overfilled with
stagnant blood. Simultaneously the muscle fibers use
the last vestiges of the oxygen in the blood, causing
the hemoglobin to become totally de-oxygenated.
Therefore, the infarcted area takes on a bluish-brown
hue, and the blood vessels of the area appear to be
engorged despite lack of blood flow. In later stages, the
vessel walls become highly permeable and leak fluid;
the local muscle tissue becomes edematous, and the
cardiac muscle cells begin to swell because of diminished
cellular metabolism.Within a few hours of almost
no blood supply, the cardiac muscle cells die.
Cardiac muscle requires about 1.3 milliliters of
oxygen per 100 grams of muscle tissue per minute just
to remain alive.This is in comparison with about 8 milliliters
of oxygen per 100 grams delivered to the
normal resting left ventricle each minute.Therefore, if
there is even 15 to 30 per cent of normal resting
coronary blood flow, the muscle will not die. In the
central portion of a large infarct, however, where
there is almost no collateral blood flow, the muscle
does die.
Subendocardial Infarction. The subendocardial muscle
frequently becomes infarcted even when there is no
evidence of infarction in the outer surface portions of
the heart. The reason for this is that the subendocardial
muscle has extra difficulty obtaining adequate
blood flow because the blood vessels in the subendocardium
are intensely compressed by systolic contraction
of the heart, as explained earlier. Therefore, any
condition that compromises blood flow to any area of
the heart usually causes damage first in the subendocardial
regions, and the damage then spreads outward
toward the epicardium.
at December 11, 2009
Email ThisBlogThis!Share to TwitterShare to FacebookShare to Pinterest
Labels: Pathology