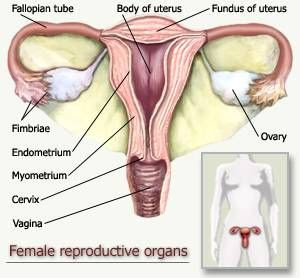 If the ovum is not fertilized, about 2 days
before the end of the monthly cycle, the corpus luteum
in the ovary suddenly involutes, and the ovarian
hormones (estrogens and progesterone) decrease to
low levels of secretion,
Menstruation follows.
Menstruation is caused by the reduction of estrogens
and progesterone, especially progesterone, at the
end of the monthly ovarian cycle. The first effect is
decreased stimulation of the endometrial cells by these
two hormones, followed rapidly by involution of the
endometrium itself to about 65 per cent of its previous
thickness. Then, during the 24 hours preceding the
onset of menstruation, the tortuous blood vessels
leading to the mucosal layers of the endometrium
become vasospastic, presumably because of some
effect of involution, such as release of a vasoconstrictor
material—possibly one of the vasoconstrictor types
of prostaglandins that are present in abundance at this
time.
The vasospasm, the decrease in nutrients to the
endometrium, and the loss of hormonal stimulation
initiate necrosis in the endometrium, especially of the
blood vessels. As a result, blood at first seeps into the
vascular layer of the endometrium, and the hemorrhagic
areas grow rapidly over a period of 24 to 36
hours. Gradually, the necrotic outer layers of the
endometrium separate from the uterus at the sites
of the hemorrhages until, about 48 hours after the
onset of menstruation, all the superficial layers of
the endometrium have desquamated. The mass of
desquamated tissue and blood in the uterine cavity,
plus contractile effects of prostaglandins or other
substances in the decaying desquamate, all acting
together, initiate uterine contractions that expel the
uterine contents.
During normal menstruation, approximately 40
milliliters of blood and an additional 35 milliliters of
serous fluid are lost. The menstrual fluid is normally
nonclotting because a fibrinolysin is released along
with the necrotic endometrial material. If excessive
bleeding occurs from the uterine surface, the quantity
of fibrinolysin may not be sufficient to prevent clotting.
The presence of clots during menstruation is often
clinical evidence of uterine pathology.
Within 4 to 7 days after menstruation starts, the loss
of blood ceases because, by this time, the endometrium
has become re-epithelialized.
Leukorrhea During Menstruation. During menstruation,
tremendous numbers of leukocytes are released
along with the necrotic material and blood. It is probable
that some substance liberated by the endometrial
necrosis causes this outflow of leukocytes. As a result
of these leukocytes and possibly other factors, the
uterus is highly resistant to infection during menstruation,
even though the endometrial surfaces are
denuded. This is of extreme protective value.
at December 29, 2009
Email ThisBlogThis!Share to TwitterShare to FacebookShare to Pinterest
Labels: Physiology