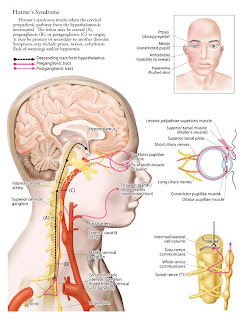 The sympathetic nerves to the eye are
occasionally interrupted. Interruption frequently occurs
in the cervical sympathetic chain. This causes the clinical
condition called Horner’s syndrome, which consists
of the following effects: First, because of interruption of
sympathetic nerve fibers to the pupillary dilator muscle,
the pupil remains persistently constricted to a smaller
diameter than the pupil of the opposite eye. Second, the
superior eyelid droops because it is normally maintained
in an open position during waking hours partly
by contraction of smooth muscle fibers embedded in the
superior eyelid and innervated by the sympathetics.
Therefore, destruction of the sympathetic nerves makes
it impossible to open the superior eyelid as widely as
normally.Third, the blood vessels on the corresponding
side of the face and head become persistently dilated.
Fourth, sweating (which requires sympathetic nerve
signals) cannot occur on the side of the face and head
affected by Horner’s syndrome
at December 06, 2009
Email ThisBlogThis!Share to TwitterShare to FacebookShare to Pinterest
Labels: Neurology