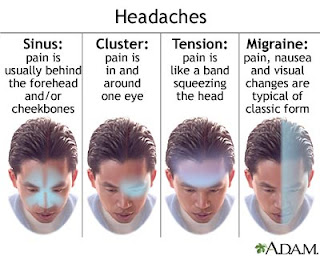 Headaches are a type of pain referred to the surface of the head from deep head structures. Some headaches result from pain stimuli arising inside the cranium, but others result from pain arising outside the cranium, such
as from the nasal sinuses.
Headache of Intracranial Origin
Pain-Sensitive Areas in Cranial Vault. The brain tissues themselves are almost totally insensitive to pain. Even cutting or electrically stimulating the sensory areas of the cerebral cortex only occasionally causes pain; instead, it causes prickly types of paresthesias on the area of the body represented by the portion of the sensory cortex stimulated. Therefore, it is likely that
much or most of the pain of headache is not caused by damage within the brain itself.
Conversely, tugging on the venous sinuses around the brain, damaging the tentorium, or stretching the dura at the base of the brain can cause intense pain that is recognized
as headache. Also, almost any type of traumatizing, crushing, or stretching stimulus to the blood
vessels of the meninges can cause headache. An especially sensitive structure is the middle meningeal artery, and neurosurgeons are careful to anesthetize this artery specifically when performing brain operations under local anesthesia.
Areas of the Head to Which Intracranial Headache Is Referred. Stimulation of pain receptors in the cerebral vault above the tentorium, including the upper surface of the tentorium itself, initiates pain impulses in the cerebral portion of the fifth nerve and, therefore, causes referred headache to the front half of the head in the surface areas supplied by this somatosensory portion of the fifth cranial nerve.
Conversely, pain impulses from beneath the tentorium enter the central nervous system mainly
through the glossopharyngeal, vagal, and second cervical nerves, which also supply the scalp above, behind, and slightly below the ear. Subtentorial pain stimuli cause “occipital headache” referred to the posterior part of the head.
Types of Intracranial Headache Headache of Meningitis. One of the most severe
headaches of all is that resulting from meningitis, which causes inflammation of all the meninges, including the sensitive areas of the dura and the sensitive areas around the venous sinuses. Such intense damage can cause extreme headache pain referred over the entire
head.
Headache Caused by Low Cerebrospinal Fluid Pressure.
Removing as little as 20 milliliters of fluid from the spinal canal, particularly if the person remains in an upright position, often causes intense intracranial headache. Removing this quantity of fluid removes part of the flotation for the brain that is normally provided by the cerebrospinal fluid. The weight of the brain stretches and otherwise distorts the various dural
surfaces and thereby elicits the pain that causes the headache.
Migraine Headache. Migraine headache is a special type of headache that is thought to result from abnormal vascular phenomena, although the exact mechanism is unknown. Migraine headaches often begin with various prodromal sensations, such as nausea, loss of vision in
part of the field of vision, visual aura, and other types of sensory hallucinations. Ordinarily, the prodromal symptoms begin 30 minutes to 1 hour before the beginning of the headache. Any theory that explains migraine headache must also explain the prodromal
symptoms. One of the theories of the cause of migraine headaches is that prolonged emotion or tension causes reflex vasospasm of some of the arteries of the head, including arteries that supply the brain. The vasospasm theoretically produces ischemia of portions of the brain,
and this is responsible for the prodromal symptoms.
Then, as a result of the intense ischemia, something happens to the vascular walls, perhaps exhaustion of smooth muscle contraction, to allow the blood vessels to become flaccid and incapable of maintaining vascular tone for 24 to 48 hours. The blood pressure in the
vessels causes them to dilate and pulsate intensely, and it is postulated that the excessive stretching of the walls of the arteries—including some extracranial arteries, such as the temporal artery—causes the actual pain of migraine headaches. Other theories of the cause
of migraine headaches include spreading cortical depression, psychological abnormalities, and vasospasm caused by excess local potassium in the cerebral extracellular
fluid. There may be a genetic predisposition to migraine headaches, because a positive family history for migraine has been reported in 65 to 90 per cent of cases. Migraine headaches also occur about twice as frequently
in women as in men.
Alcoholic Headache. As many people have experienced, a headache usually follows an alcoholic binge. It is most likely that alcohol, because it is toxic to tissues, directly irritates the meninges and causes the intracranial pain.
at December 22, 2009
Email ThisBlogThis!Share to TwitterShare to FacebookShare to Pinterest
Labels: Neurology